Mango is a fruit native to the South Asian Part of the World. It is one of the most prominently grown fruit in the world. It is also known as the King of Fruits and is a very important and cherished fruit of India. India ranks at number 1 slot in the production of Mango all over the world leaving China and Thailand behind. Over 18 Millions of tons of Mango is produced in India which is almost half of the global supply of mango. Almost 2,400,000 acres of land is dedicated to mango cultivation in India.

Also our nation is an abode for a number of mango varieties in the world. All these mangoes are known for their richness, flavor and sweetness. Not only is the flavor, this fruit also is full of essential nutrients making it one of the versatile fruits of Indian Sub-continent. It is fat free and lowers down the bad cholesterol of the body. Apart from that it is full of Vitamin A, C and dietary fiber, potassium, polyphenols and carotenoids. One of the favorite fruits of the world, it has a number of varieties like Alphonso, Sindhuri, Totapuri, Chausa etc. more so around 285 varieties of mangoes are found in India. Mostly people are aware of only 30 of them.

Let us find out top 10 states in India contributing to make our country one of the top most producer of Mangoes:

At number 10, we have Maharashtra. Mango is one of the leading fruits produced in Maharashtra. Alphonso is one of the best varieties mango produced in Ratnagiri, Sindhudurg and Raigad districts of Maharashtra and also the Konkan Area of India. It is also one of the expensive and superior variety of Mango. It is rich in sweetness and flavor. Mango frooti is also made up from Alphonso mangoes and apart from that many ice-creams, mousse and soufflé is made up from this variety. And the most favorite summer drink Mango shake is best made with these mangoes. Other varieties include Mulgoa, Kesar, Vanraj, Gulabi, Mankurad, Rajapuri and Pairi.

Varieties like Chausa, Amrapalli, Jardalu, Bombai, Mallika, Gulabkhas, Langra, and Himsagar are produced in Jharkhand. Chausa mango has a medium size shape and takes a golden yellow hue when ripe. Mango growth is very comfortable in sub-tropical and tropical climates. In Jharkhand mangoes are produced in a number of places such as Hazaribagh, Godda, Ranchi, Gumla, Sindega and Sahibganj.

Majorly known for the production of varieties such as Gulabkhas, Himsagar, Mallika, Langra, Kishen Bhog, Amrapalli, Bombai and Fazli. Mostly areas like Malda, Nadia and Murshidabad are known for mango cultivation. The Himsagar is one of the most special varieties grown in West Bengal. This is one the top 5 varieties of Mango that should be eaten at least once. The other four most important varieties being Banganapalli, Gir Kesar, Ratangiri Hapus and Banarasi Langda.

Places like Puri, Malkanpuri, Ganjam, Bolangir, Rayagada, Dhenkanal, Sonepur, Koraput, Gajapati and Gunpur are famous for the production of Mangoes. There are a number of varieties that can be found in Orissa. But the most prominent ones are Mallika, Suvarnarekha, Neelum, Baneshan, Amrapalli and Langra. Himsagar is again one of the specialty of Orissa and must be tried once.

In places like Madurai, Theni, Vellore, Dharmapuri and Tiruvallur you would find some of the greatest varieties of Mangoes such as Neelum, Alphonso, Rumani, Banganapalli, Mulgoa, Bangalora and Totapuri. Totapuri is one of the famous mangoes found in south Indian states like Karnataka, Tamil Nadu and Andhra Pradesh. Mulgoa is also one of the best known mango variety known as Alphonso of South India and is grown in Tamil Nadu primarily.

Mango varieties such as Totapuri, Rajapuri, Langra, Alphonso, Vanraj, Dashehari, Kesar, Neelum and Jamadar are grown and cultivated in Gujarat. Kesar Mangoes are also known as Gir Kesar as they are majorly grown in the hills of Girnar in the Junagadh and Amreli districts of Gujarat. Other places include, Bhavnagar, Valsad, Surat, Khera and Mehsana.

Bihar is known for the cultivation of the major varieties such as Kishen Bhog, Himsagar, Dashehari, Chausa, Fazli, Langra, Gulab Khas, Bombai, Sukul, Zardalu and Bathua. Malda is grown in the area near Patna known as Digha. These Malda Mangoes are known for their great taste and have a very thin skin. So can be devoured easily. Gulab Khas is another variety cultivated in Bihar and this is known for its aroma and rosy flavor. It also appears reddish as the name suggests.

Famous varieties grown in Karnataka’s Bangalore, Kagu, Kolar and Tumkur areas are Neelum, Baganapalli, Bangalora, Pairi, Totapuri, Alphonso and Mulgoa. Pairi is one of the early fruits of the season. The Baganapalli is one of the common variety of Karnataka and these are known as the King of Mangoes in South India. The Raspuri variety is known as the Queen of Mangoes in India is an oval shaped mango and has an excellent and juicy flavor. It is also known as Peddarasalu or Rasapuri in Karnataka. 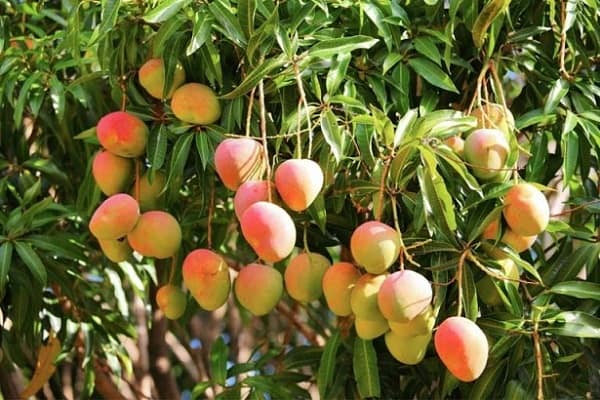 Ranking 1 at the top 10 mango producing states of India, Uttar Pradesh has a number of places like Saharanpur, Lucknow, Bulandshahar, Varanasi, and Faizabad which specialize in production of mango. Varieties like Safeda Lucknow, Dashehari, Chausa, Bombay Green, Langra and Fazli are produced majorly. Uttar Pradesh is the largest producer of Dashehari variety of Mango. From Uttar Pradesh, this variety is even exported to Philippines, Malaysia, Hong Kong, Singapore and other South East Asian Countries.

Pests and diseases in some parts of the country has depleted the growth and cultivation of Mango. Powdery mildew is one of the serious diseases that the mango agriculture industry is getting affected with. It is like a fungal growth on flowers, leaves and stalks of panicles. Another deadly disease is Anthracnose which causes damage to new shoots and flowers. New technologies are being adopted for the better fruit and good health of the trees. Old and senescent orchards are now being rejuvenated. Drip irrigation and fertilization has been used to increase water in the depleting water tables of the field.