After a long and tough struggle against slavery at the hands of the British, India finally achieved emancipation at the stroke of midnight on 15th August, 1947, making it the most eventful day in the history of the country. The day is celebrated every year with great joy and fervor to commemorate this grand event. While many facts are known about the Indian Independence Day, some are yet to be unraveled.

Here are 10 most interesting Independence Day facts that every Indian must know: 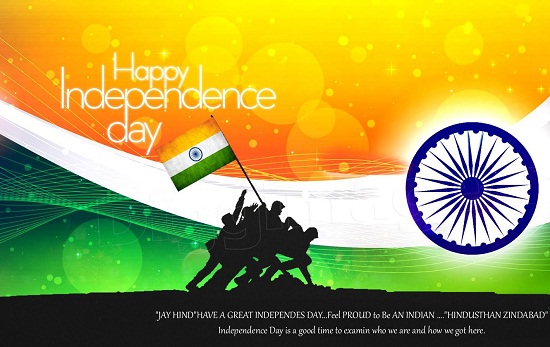 #1. The first time ever when the national flag was hoisted was on 7th August, 1906 and the venue of the fateful event was at Parsee Bagan Square in Calcutta. It was designed with three horizontal stripes of red, yellow and green colors, with eight white lotus flowers in the red strip, a white sun on the left and white crescent with star on the right in the green strip.

#2. The credit for designing the first version of the present national flag of the country goes to Pingali Venkayya at Bezwada in 1921. It has red and green strips, flanking a white one in the idle. The red and green colors stood for the two main communities of India, with the white one standing for the rest of them. The white strip had a spinning wheel inside it, which has now been replaced by the Ashoka Chakra, while the red strip has been replaced by a saffron one.

#3. The country had no official National Anthem at the time its achieved independence. Jana Gana Mana, which was universally accepted as the Indian National Anthem was written back in 1911, in its Bengali version.

#4. The Independence Day of India is shared with some other countries such as North Korea, South Korea, Republic of Congo and Bahrain. It is also an important day in world history as it is the anniversary of surrender of Japan to Allied Forces.

#5. At the time India became independent on 15th August, 1947, Gandhiji was in Calcutta. He offered prayers all through the day and fasted in protest of the communal hatred which the country was witnessing on a widespread scale.

#6. Mahatma Gandhi was in favor of disbanding the Congress after the independence of the country.

#7. Hindi is not the national language of India; rather it is the country’s official language, as stated by article 343 of the Indian Constitution.

#8. India gets its name from River Indus, which was the home of the Indus Valley Civilization, one of the earliest known civilizations of the world. On the other hand, the Sanskrit name of the country is Bharat Ganarajya.

#9. Goa was declared as a Portuguese state after India attained independence in 1947. The state was later annexed to the country on 19th December, 1961 after being invaded by Indian troops.

#10. Jawaharlal Nehru, the country’s first Prime Minister after independence was considered as a global style icon and his famous Nehru jacket became an instant hit around the world. It even earned him a place in the Vogue magazine.

All these amazing facts about Indian Independence day would definitely fascinate readers who would love to learn more about the freedom struggle of the country.