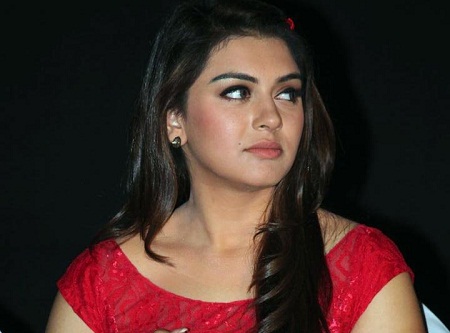 Income Sources: Hansika Motwani started her career at a young age, with child artist roles in several successful television serials and some Bollywood movies too. Today, she is one of the most sought after actresses in the South Indian film industry, having delivered a large number of successful movies in Tamil and Telugu languages.

Marital Status: Single, though she was once in a relationship with actor Simbu but the couple broke up.

Hansika Motwani comes from a Mumbai based business family, with her father Pradeep Motwani being a businessman and mother, Mona Motwani being a dermatologist. She has a brother named Prashanth Motwani. She is a Buddhist and she completed her schooling in Mumbai, from Podar International School and later, International Curriculum School. When Hansika started her career as a child artist in TV serials, no one could have known that she would reach such heights of popularity. Besides her film career, she is also involved in humanitarian activities, extending financial support to cancer stricken women and underprivileged children. Hansika is also the brand ambassador of a breast cancer awareness program called “Chennai Turns Pink”. As is a trend in South India, her fans have built a temple dedicated to her in the city of Mumbai. The glamorous actress has also made it to the Forbes list of 250 celebrities in the year 2014.

Hansika Motwani started off as a young star with a serial called “Shaka Laka Boom Boom”, followed by another popular one “Des Mein Nikla Hoga Chand”, which earned her a Star Parivaar Award for Favorite Child Artist. She also made an appearance in the hit movie called “Koi Mil Gaya”, with a big star cast including Hrithik Roshan, Preity Zinta and Rekha, along with a few other Hindi movies. Then began a new era in her career, with a role in a 2007 Telugu movie called “Desamuduru” and there was no looking back for her after that. Hansika bagged the Filmfare Award for Best Female Debut South for this movie. Next came some big hits in Telugu industry, such as “Kantri” and “Maska”. Hansika went on to make her Tamil debut in 2011 with the film called “Mappillai”, following which came some other big ones like “Theeya Velai Seiyyanum Kumaru”, “Oru Kal Oru Kannadi” and “Maan Karate”.

She has also acted in one Kannada movie called “Bindaas”, which was released in 2008. Besides South Indian films, Hansika has also been a part of Bollywood, with a film called “Aap Ka Surroor” which had her paired opposite singer turned actor, Himesh Reshammiya.