Dwarka the land of Lord Krishna, worships Lord Krishna as emperor, Lord Krishna is also famously called as Dwarkadhish or Jagannath or can be spelled as Dwarkadheesh. The Temple is located in Gujarat one of the well-known parts of India that has enriched past with reference in mythological books as Lord Krishna was known in scriptures such as Bhagavad Gita and Mahabharata as the emperor of Dwarka. The town is located on the shores of one of the Indian largest river basin called the Gomati River.

Hindu believes that the temple in its original form was constructed by Vajranabh, and the person is called as the Great Grandson of Lord Krishna. The Dwarkadhish Temple is built over the residential palace of Lord Krishna. One of the popular and most valuable temple for Hindu devotee, the temple reports that over the period of a year they see three to four lakhs devotee visiting the temple to bestow the blessing of Lord Krishna. 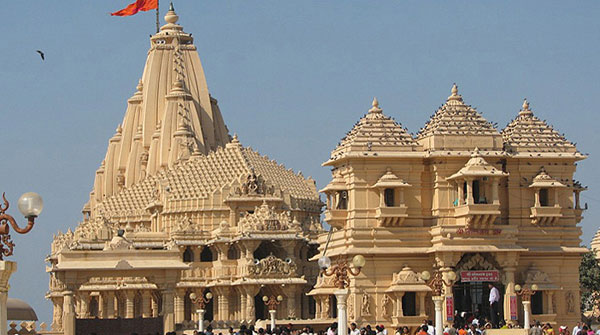 The list of Top 10 Interesting Description about the temple will surely urge you to see it next time you decide to pack a bag for a devotional trip.

If you have great interest in history and visiting the historical places, the City Dwarka and Dwarkadhish Temple is the best available choice, the Dwarka city in Gujarat region is labeled as one of the five ancient city in India that imparts the enriched past of India changed over the period of time and also will provide you peace of mind and soul.

The Gopi Lake region is 14 Km away from Dwarkadheesh Temple, the soil of lake area is unique as it is yellow in color and is extremely soft. The myth of Gopi Lake says, beloved and devotees of Lord Krishna Gopi’s of ‘Vruj’(Krishna’s childhood residence) used to visit Dwarka to play Ras Leela. All the Gopis sacrifice their life near this lake that’s why it is called Gopi Lake and the soil is unique and soft.

According to Hindu mythological book, Mahabharata, land of Dwarka was once submerged in the sea due to heavy rainfall and flood. The blessings of Lord Krishna helped the residents of Dwarka to reclaim the land and to develop it as Dwarka City by Lord Krishna.

Most of Temples have only one entrance to the main temple but Dwarkadheesh Temple allows entry with two gates, the northern entrance or the main entrance is termed as “Moksha Dwara”(Gate to Escape) that leads to one of the main markets of the region. Southward Entrance “Swarga Dwara” is called Gate to Heaven.

As museum the Dwarkadheesh Temple has showcased all the sculptures that have some reference to Temple, all these sculptures are highly expensive and carry information about crucial phases of India.

3. Flag at the top of Temple

The Flag at the top of Temple is decorated with the sun and the moon, it is a routine of Temple Officials to change it 5 times a day but the symbols of the flag moon and the sun remains the same.

Dwarkadhish Temple is designed with Chaulkya Style one of the ancient ways of designing royal buildings, the temple was constructed around 15 to 16th Century. The temple covers 27 meters area with the east-west length of 29 meters. The temple spire is 78.3 meter high. The temple is constructed using limestone and the quality of limestone is till date is in its pristine condition.

People around the country and foreigner also turn towards Dwarkashish Temple to celebrate the Birthday of Lord Krishna. According to Temple officials, approx one million visitors visit the temple during Janamshtmi. Dwarka region is decorated like a queen on occasion and the aspirant devotees flooded with love for Lord Krishna.