China’s transport sector has grown in leaps and bounds over the last 20 years. With the advent of modern technology and the continued vibrancy of the Chinese economy, the world’s most populous nation has finally caught up with the modern technologies of its neighbors like Japan, South Korea, and the western nations.

This list will give you ten of the most interesting facts about China’s high speed train – the Guiyang-Guangzhou HIgh Speed Railway or HSR: 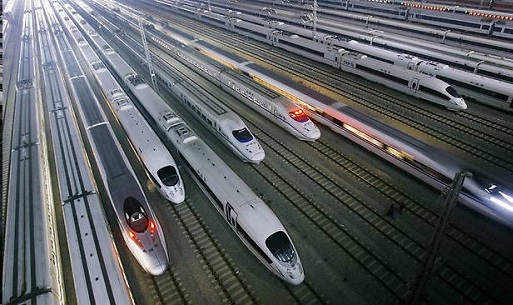 10. The trip boasts of beautiful scenery

The HSR is highly impressive for the engineering behind its construction. The HSR has enabled far-flung towns and suburbs to be integrated with China’s megacities. What’s even more impressive is the fact that a ride in the HSR enables the rider to view and appreciate China’s beautiful limestone landscapes for more than 220 kilometers of the journey.

9. The trip is a stunning altitude and light show

Constructed at a cost amounting to 15 billion US Dollars or 90 billion Yuan, the HSR is a real time-saver. It passes through 500 bridges and 238 tunnels – enduring the rider of a spectacular variation of altitudes and display of darkness and light throughout the duration of the trip.

8. It passes through the longest bridge in China

Guangzhou, a city in the southeastern part of China near Hong Kong, is a city of more than 10 million inhabitants. To get to this city from the northern part of China, the HSR passes through the Dongping Waterway Bridge- the longest bridge in China. The bridge measures 9,230 meters long.

7. It passes through the largest tunnel in China

The rider not only passes through the longest bridge in China but also the longest railway tunnel in the country and one of the longest in the world. The Yanshan Tunnel stretches to a distance of 14 kilometers. The tunnel, which took 3 years to build, has the train passing in it for a mere 4 minutes.

6. The HSR is not yet making any money

Any recent technological innovation always proves to be a financial gamble especially in its beginning phase. Return of investment usually takes a while before a turnaround happens. This is also true for the HSR. It is currently operating at an annual deficit of 2 billion Yuan or about 340 million US Dollars. This is due to loans and repayments that had to be made after construction.

5. The HSR is said to be an economic equalizer

China, despite its recent economic development and great strides it has made towards national prosperity, still has a considerable income gap. However, the HSR has linked both of China’s rich and poor sectors like never before. Its route directly connects the less-developed Southwest with the prosperous cities of China’s east coast.

4. Ticket prices of the HSR are not revealed online or on the phone

Perhaps owing to its novelty, the HSR’s prices may only be obtained once you show up in the train station itself. The ticket price was once made available by calling the HSR customer hotline. Due to the very high number of inquiries, the customer telephone hotline was abruptly discontinued the very next day.

The HSR first opened its doors on December 26, 2014 – its maiden trip. Tickets for purchase were made available two days prior. Tickets for the first trip of the HSR weresold out in just approximately 13 minutes.

Since this is a high-speed train, it is supposed to be fast, right? And it is very fast indeed! The Guangzhou-Guiyang route, which was once 20 hours prom point to point, now only takes4hours and 10 minutes. That is just amazing!!!

1. It is both very fast and very convenient

The HSR has not only reduced the travel time but also gives its riders quite a comfortable ride. The winding routes had been shortened and made more bearable. The train’s suspension engineering also enables the rider to feel less turning and churning and maximize comfort.