Bauxite is the world’s major source of aluminum. It is a rock solid kind of aluminium ore formed when the strong weather conditions affect the rocks and soil of the mountain. The producers of Bauxite in the world have more mountain ranges. In order to get the heavy rocks broken down into smaller usable chunks, the mountains need to be blasted. These smaller pieces are then loaded in the trucks and transported to refineries in order to obtain the unadulterated alumina ore. For bauxite production, mountains and hard climatic conditions play a major role.

Since Aluminium is obtained out of Bauxite, it is considered very important for the mining industry. This industry has developed and expanded since the time bauxite was discovered. Usually bauxite or aluminium ores are found in all the countries but there are some countries where the quantity is quite huge. It has also resulted in boosting the economic condition of the countries. People are not only exporting bauxite to other countries but are also saving up for the future. This is a great investment which has great returns.

With 2500 thousand tons, Venezuela ranks on number 10. Apart from bauxite, other minerals produced in this country are gold, coal, oil and iron ore which are in the state controlled reserves. Approximate 5.2 million tons of Bauxite is preserved in the reserves. Bauxite ranks number 2 in the production of aluminium and iron ore. Other valuable producers are diamonds and ferroalloys.

Suriname produces about a percent of global production of Bauxite and ranks on number 9 with 2800 thousand tons. The biggest mine in Suriname for the production of Bauxite is the Coermotibo Mine. The other significant mines are Klaverblad and Kaimangrasie. The principle mining company of Bauxite in this country is Suriname Aluminium Company (Suralco), which is a subsidiary of Alcoa.

Jamaica contributes to almost 4% of the global production of 9900 thousand tons of Bauxite. The country is blessed with 5th biggest bauxite reserves in the world.  Noranda Jamaica Bauxite Production (NJBP) owns and operates the St. Ann Bauxite Mine or the discovery bay. This is also the biggest producer of bauxite in the country. The other bauxite producer is Mount Oliphant mine which is a joint venture between Alcoa and the Government of Jamaica and is names as Jamalco.

On number 5, we have India with 20,300 thousand tons of annual bauxite production. India holds for almost 6% of the global production and has the 7th largest bauxite reserves of the world which counts to make about 3% of the global reserves. Bauxite is mainly extracted from Indian states of Andhra Pradesh and Orissa. The biggest mine is Panchpatmali mine which is the largest producer of bauxite. The other major mines of bauxite production are Hindalco’sBaphlimali mine and Kolhapur bauxite mine in Orissa and Maharashtra respectively.

Guinea is the West African country which produces almost 7% of the global production around the year. With 20,600 thousand tons of Bauxite production Guinea ranks on number 4. Guinea holds almost 26% of the global resources making it the richest country of bauxite holdings.  Boke mine or the Sangaredi mine, has evolved to become the biggest mine of Guinea that produces bauxite. It is owned and operated by Compagnie des Bauxites de Guinea (CBG), which is the major bauxite producing company in the country.

At number 3, we have Brazil with 35800 thousand tons of production annually which is almost 14% of the global production. Brazil has about 9% of the world’s resources. Mineração Rio do Norte (MRN) owns the biggest mine of Brazil which is the Porto Trombetas mine. The other significant mines are Alcoa’s Juruti mine and Vale’s Paragominas mine. 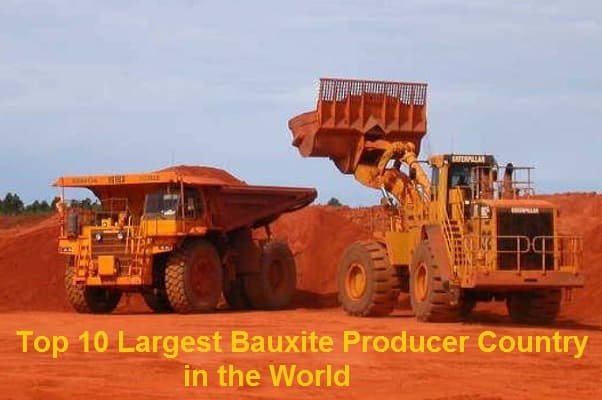 The largest producer of Bauxite in the world is Australia with 87500 thousand tons. Almost 31% of the global production of Bauxite is credited to Australia. Also there are 5 mines in the country which are actively producing Bauxite such as Boddington mine, the Huntly and Willowdale mines, Rio Tinto Alcan’s Weipa mine, and the Gove mine which are owned and operated by BHP, Alcoa, Rio Tinto and Pacific Aluminium respectively. These 5 mines are fully functional and extract the aluminium ore. The weather conditions in Australia are appropriate for the mining and there are plenty of refineries which filter the elements.

Australia has abundance of bauxite elements and the aim of this country is to provide the best quality bauxite to the world. Australia has a considerably high production and it is almost two times of Brazil’s production. The weather and the climatic conditions play a major role in the production of bauxite and thereafter the extraction of aluminum. Bauxite is majorly utilized to obtain the aluminum which is greatly used for a plenty of things. If you want to build buildings or even vehicles, aluminum is greatly required. Surely, the nature blesses us with such things we should be grateful for.