Dry fruits are very good for the human health. Of all the dry fruits, Almonds are considered the best for the human body because of the certain qualities present in it. Mainly almonds are produced in Europe and Middle East and it is one of the most vastly grown fruit of the world. Initially it was produced in Middle Eastern countries but eventually after the seeds got transferred to Africa and Europe, they also starting taking the advantage of this fruit. Before these almonds come to the market for selling, they are either processed by removing the first layer of their hard shell or directly marketed in the as per the requirement.

It is a very essential source of nutrition as it enhances the memory and brain. It is very essential to make the body fit and it boosts the immunity of the body to fight against the diseases. It is said that soaked almonds are very good for the overall health especially to make their minds sharp and active. Also cancer could be kept at bay if this miracle fruit is consumed. It has low fat content but otherwise many essential nutrients are present in almonds.

At number 10, we have Greece with 45150 metric tons of almond production annually. Almonds usually comes from Magnesia, Almyros. The two categories of almonds are produced there such as Teksas almonds and Ferragnes almonds which are highly regarded for their taste and quality. In Greece, people use almonds to make desserts and wedding sweets. Some of them are utilized to make soft drinks such as Soumanda.

In the southern hemisphere, Australia produces approximately 46381 metric tons of almonds per year. In the places around Murray River such as Victoria, South Australia and New South Wales, almond production is abundant. There are a number of varieties grown here such as Mission, Firtz, Nonpareil and Chellaston. Almonds are utilized in the raw form and to improve the flavor of the food.

At number 8 we have Turkey with the annual production of 49048 metric tons. Usually it is cultivated in the regions of Mersin, Marmara, Aegean and the Mediterranean. There varieties cultivated here are Ferragnes, Nonpareil, Ferrastar and Teksas. The climatic conditions are suitable for cultivation of high quality almonds. And it is majorly used in confectionery items, chocolates and cakes.

With 49605 metric tons of almond production annually, Tunisia stands on number 7. Usually the cultivation of Almonds and Olives is done together. Apart from Almonds, Pistachios is also cultivated in Tunisia. Nuts have a major role in the agricultural sector of Tunisia. Interestingly, majority of the almond production is utilized within the country itself and a very small percentage is exported to other countries. More than 50% of the plantations could be found in the Sfax region in Tunisia and the rest is spread across the country.

On number 6, we have Morocco with 72360 metric tons of almond production per year. The Mediterranean region and the climate is suitable for the cultivation and growth of almonds in the country. Grafted trees as well as growing of seedling is quite common. More than 65% of the cultivation is done on small scale where the yields are also lower. Almonds are majorly used in the pastry fillings as Almond paste and also in a number of deserts such as Sellou which is a sweet snack made of almond and can be preserved for a long time.

Syria has about 18 million trees which produce more than 84485 metric tons of almonds every year. Due to the political unrest the rank of this country has fallen from number 3 to number 5. Syrian Almonds are processed and exported to other countries. This comes in two categories such as Sweet Almonds and bitter almonds. These are known by variety of local names in the country.

Annually Iran produces about 99,551 metric tons of almonds. Majority of the cultivation is done in Tabriz region and the North West region of Iran. The local variety of almonds in the country is known by the name of Amygdaluscommunis. Again the sweet and bittersweet categories of almonds are available. Majority of the almonds are exported to India. If you ever get a chance, try the green almonds dipped in the sea salt. These are relished by all and sold as a very common snack in the streets of Iran. Harire Badan is made out of the Sweet kind of almonds which is a baby food.

On number 3 we have Italy with 100664 metric tons of almond production every year. Bitter almonds are extracted from apricots which facilitate production of many desserts in the country such as Amaretti which is the most favorite dessert of Italy. Bitter almonds are used to add the bitter flavor to the cookies. Many households use almonds to make Torrone and Pasta di mandorle which is an almond paste. Usually the production of almonds take place in the Southern cities and Sicily – the green hilly city of the country.

With almost 222959 metric tons of almond production per year, Spain ranks on number 2. There are endless cultivators in Spain who produce this crop for commercial reasons. Places such as Catalonia, Valencia, Aragon, Murcia and Andalusia are known for the cultivation of almonds. Almost 40% of the production comes from the two major varieties of almond found in Spain such as Desmayo Largueta and Marcona. The other varieties grown here are Cristomorto and the Ferragnes Ferraduel. This nut is used in the soup to enhance the flavor and are consumed raw. 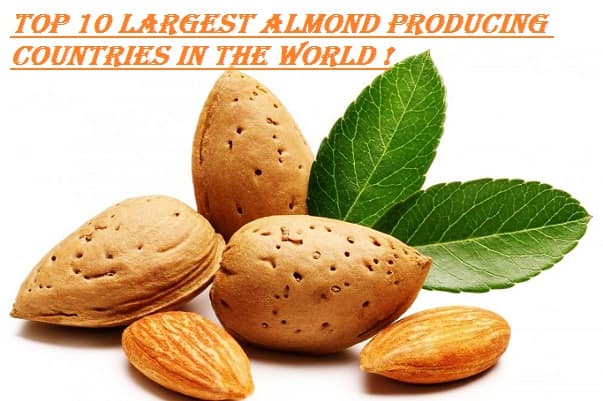 The world leader and the super power of the world – United States – top country which produces the most almond in the world. Almost 898167 metric tons of almond production annually majority of which is cultivated in California. Approximately 70% of the production is exported in the hard shelled form whereas the remaining are sold unshelled or processed. The weather conditions of California are appropriate for the production of almonds and apart from that the techniques and the state of the art technology makes US stand on top of the list. The sweet almonds produced here are exported as well as used locally for food items.

Almonds are really savored around the world. US accounts for the most production and due to the weather conditions and the state of the art technology it will continue to beat other countries in the competition. This fruit has great health benefits and is really helpful for people.