Uttarakhand is a northern Indian state which was formerly known as Uttaranchal. Uttarakhand is known as the Dev bhumi, Land of the Gods owing to many Hindu temples and pilgrimage centers found interspersed throughout the city. Uttarakhand is known for its natural beauty of the Himalayas, the snow capped mountains, the Bhabhar and the Terai.  It borders Tibet on the north and Nepal in the east; the Indian states of Uttar Pradesh to the south and Himachal Pradesh in the west.

Uttarakhand is divided into, Garhwal and Kumaon, and has a total of 13 districts. Dehradun is the capital of Uttarakhand and also the largest city of Uttarakhand, which also has a railhead. The High Court of the state is in Nainital. Here we list Top 10 interesting facts about Uttarakhand you must know: 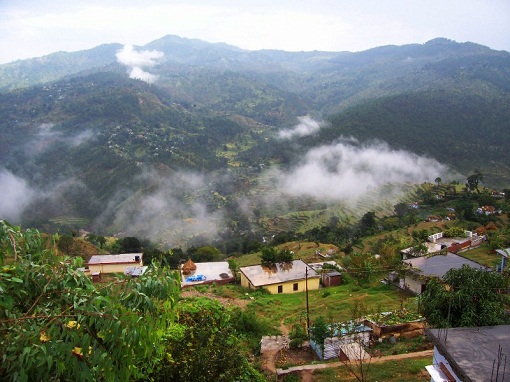 It is the only state in India where forest cover is increasing. It can be attributed to the huge success of Chipko (to stick) movement. In this movement, to stop the trees from being cut, people will hug them and protect them.

The Naini Lake is one of the 64 Shakti Peeths, or religious sites. It is believed that parts of the charred body of Sati (Parvati) fell on earth while Lord Shiva carried her. The spot where Sati’s eyes (or Nain) fell, is famously known as Nain-tal or lake of the eye. Badrinath temple is one of the most important of the four places in India’s Char Dhamyatra. Conch blowing is prohibited in this Hindu temple. A famous legend narrates that  when the great sage Agastya was killing the demons in Kedarnath, two demons Vatapi and Atapi  ran away.  Atapi took hid in the Mandakani River, and demon Vatapi took went in side the conch to save himself. It is believed that if the Conch is blown, the Vatapi demon would come out of the conch.

8. Sparse population, but most army man

Uttarakhand has total population less than the city of Kolkata. Uttarakhand has the highest participation in Indian army and greater percentage of people in the army than any other Indian state.

7. Uttarakhand: The Yoga Capital of the World

Yoga’s origins are a much debated topic, but many historians say it may have originated in the vicinity of Himalayas, along Ganges banks in Rishikesh.  It has been the epitome of a holy place, attracting spiritualists from different corners of the world trying to connect with the land, philosophies and the spirit.  Beatles graced Uttarakhand with their presence in 1968 and The Beatle’s, The White Album was mostly written here. Uma Thurman to Jeremy Pivent, and many Bollywood stars, Prince Charles and the Duchess of Cornwall has visited the town. Maharishi Mahesh Yogi was the Beatle’sguru there –and his claim to fame is the introduction of the Transcendental Meditation technique.

Tungnath is a Lord Shiv Shrine and is situated atthe  highest altitude of 4000m, one of the highest in the world. Hemkund Sahib located at 4600m is highest placed temple.

Bal Mithai is a brown chocolate-like fudge, made from roasted Khoya with white sugar balls as the topping is a popular dessert, especially in Almora regions.  Ruskin Bond, famous for his short stories, lives in Mussoorie. Many of his works describe the life in hill stations and most of his works derive inspiration from the foothills of Himalaya.

4. TehriDam: The Biggest Dam of India

Located on the Bhagirathi River, Tehri Dam is the highest dam in India. It is 261 meter shigh and the eighth tallest dam in the world. The first phase was completed in 2006 and remaining two phases are under construction. The Dam water is used for many purposes like irrigation, municipal water supply and the 1,000 MW of hydro power generation.

Uttarakhand is the only Indian  state with Sanskrit as one of its official languages.

Jim Corbett National Park is one of the most famous National park in India and was established in 1936. Hailey National Park was it its initial name and it was built to protect the Bengal tiger,an endangered species. It is situated in Nainital district of Uttarakhand, it is named after Jim Corbett, who played an important role in its construction. Corbett National Park is spread over 520.8 km square, the area of hills with riverine belts, grasslands and a large lake.

We hope you found this article informative.Here we listed top 10 interesting facts about Uttarakhand. Uttarakhand is a beautiful place and you will experience nature’s many mysteries if you visit Uttarakhand.