There are innumerable temples in India, few are very beautiful places. Badrinath is an overwhelming place for tourists and devotees to visit at. It is said that if you are the follower of Lord Vishnu, then you must know about the Badrinath Temple, the tempting natural scenes attracts everyone. It also seems very easy to be there, but in fact, it is one of the adventurous journeys of your life, if you visit Badrinath Temple.

There are various strong opinions which are with the Badrinath Temple who are regularly increasing the spirituality in the devotees. The holy atmosphere which consists of maha-abhishek, abhishek, chanting mantras, ringing of bells  soothes and purifies the surroundings.Devotees purify their soul and satiates thirst of worshipping their Lord. Let’s share ten interesting facts about the Badrinath Temple: 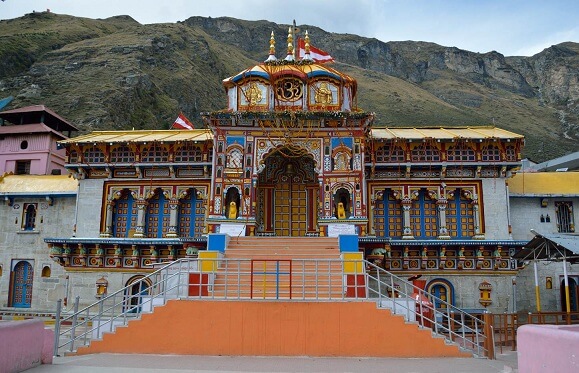 This temple was created in the 13th century. The Badrinath temple is located on the altitude of 3133mts with the area of 3sq kmsin the district of Chamoli in Uttarakhand. The Badrinath Temple is among the four pilgrimages of Hindus. It is situated on the Alaknanda River at the NainaParvat, near TaptaKund, which is a hot water spring. The temple has three parts: The garbhgriha, Darshanmandap, and Sabhamandap. The Lord Badrinath is seated in the garbhgriha, second part is also known as DarshanMandap where all devotees come for worshipping, and sabhamandap is the outer hall where devotees wait for doing darshan of their lord.

The name of the Badrinath Temple originates from a known word badri which is said a type of wild berry. A mythological story increases the faith of devotees. The story is when Lord Vishnu sat in penance in the mountains of Badrinath; then His Better half Goddess Laxmi changed herself in berry tree to shade her husband from the harsh sun. That is why sages and pilgrims belief in meditating here for mental peace and enlightenment.

3) Part of Both Four Pilgrimages

The Badrinath Temple comes in the category of both Chardham, the Bada Chardham, which are at the four corners of India and also another who are in Uttarakhand. It has a great value in the Hindu Mythology. The Concept of re-birth ends if a person visits Badrinath Temple. That gives end of liberation from the cycle of Life and Death, and that is the main reason everyone wants to visit at least once in a lifetime to the pilgrimage. The temple has the idol of Lord Badrinath as Brahma, Vishnu, Mahesh, Kali, or Guru and many more.

It is seen by many devotees that there is a lamp which continuously glows from the last six months when the door opens. The faith unfolds a story that Gods lights that lamp when no one stays at this place due to extreme cold.

People have beliefs that Narasimha Temple in Joshimath has connections with Badrinath Temple. It is predicted that when arms of Narasimha thins and breaks away slowly, then it will merge in Badrinath. This merge will be known that Nar and Narayan Mountain merge. After that no Badrinath Temple will come in view. It is a myth or truth, no records are available.

6) Badrinath Temple, as a Buddhist Temple

Although no historical records are there for the Badrinath Temple, but the greatest quality comes in the enriched literature of ancient stories and sculptures attached with it. The temple has connections with the time of Pandavas and stories of many sages. Various stories Draupadi comes into existence with the Badrinath Temple.

8) You Can Get Reference in All Vedas only

In SkandPuran,the Temple of Lord Badrinath was re-discovered by Adiguru Shankaracharya who comes from Narad Kund. The reason behind the re-discovery is to motivate and increase Hinduism among people. At that time the faith in God was decreasing and sages were worried about the existence of their goddess and deity.

Researches showed that Badrinath is also known as “Badri-Vishal”. There is a peak near Badri-Vishal which is known As Swargarohini or the Path of Heaven.

10) The Badrinath Temple is the best salvation Place