India is the land of rich culture and great religious faith. One of the religions which have a very large number of followers in the country, is Hinduism. Chardham is regarded among the most important and sacred of pilgrimages in the Hindu religion. As the name suggests, the yatra includes four sacred destinations, namely Yamunotri, Gangotri, Kedarnath and Badrinath. These pious places lie in the mountainous areas of the state of Uttrakhand and visiting them is believed to bring Moksha or ultimate salvation for the devotees.

Here are 10 interesting facts about the holy Chardham Yatra: 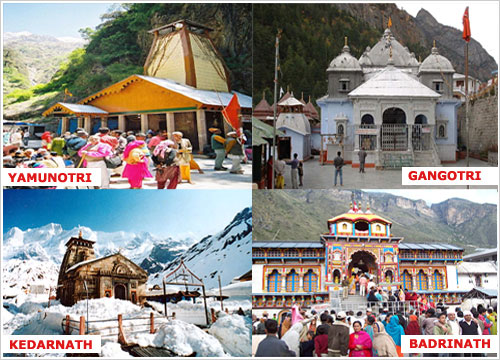 #1. Chardham Yatra is not confined to a single sect of devotees in the Hindu religion. While Yamunotri and Gangotri are dedicated to Goddess Devi, Badrinath is the holy site for Vaishnavas and Kedarnath is dedicated to the Saiva sect of the religion.

#2. The holy yatra comprises of a Parikrama, a sacred pilgrimage from West to East. It starts from Yamunotri Temple, lying in the west of Garhwal, and the devotees travel to Gangotri Temple. From here, they embark to Kedarnath Temple and the Parikrama finally ends at Badrinath Temple, which lies in the east of the region.

#3. One of the important sites in the pilgrimage is the Jalmagna Shivlinga, which according to mythology, is the place where Ganga was held in the locks of Lord Shiva. The natural rock formation is located near Gangotri temple and lies immersed in water, becoming visible only when the level recedes in winter.

#4. Originally, the idol of Lord Badrinath was located in a temple at the Garud Caves near the Tapt Kund. The idol was placed here By Adi Shankracharya, who found it in River Alaknanda. It was moved to its present location by the king of Garhwal much later.

#5. The original Kedarnath Temple was built by the Pandavas, who came here in search of Lord Shiva as they wanted to repent their deeds after the Mahabharata. This was the place where they found Lord Shiva and he left, leaving his hind part behind. A new temple was later constructed besides the original site.

#6. Surya Kund is a natural spring of hot water located near the glacier of Yamunotri. Surprisingly though, the water here is so hot that even the Prasad can be cooked here in a matter of minutes.

#7. Another hot spring is located at Gauri Kund, which also houses a temple and is the site where Goddess Gauri performed yoga. The place is also the base camp of the yatra to Kedarnath.

#8. The mythology saya that a time will come that the temples of Badrinath and Kedarnath will no longer be accessible. In future, the mountains of Jaya and Vijay will merge as the arm of Lord Narasingha will fall. The path to the temples will then be closed and pilgrimages will worship at the Bhavishya Badri, close to Joshimath.

#9. Tapt Kund, the hot spring below Badrinath Temple is known to have curative properties and pilgrimages take a dip here before going to the temple. According to the legend, the spring is the abode of Lord Agni.

#10. Another spring located next to the Tapt Kund is the Narada Kund, another place where they bathe before proceeding to the temple.

Yet another amazing legend related to the Chardham Yatra is that no one is allowed to blow a conch here, as the belief is that a demon called Vatapi is housed in the conch. Once the conch is blown, he would escape.