Robberies are something, that has been taking places, since ages, and there is no way it can stop. From the petty robberies to the grand scale robberies, it all happens till date. Sometimes the thieves are caught, sometimes they aren’t. There are a lot of movies that has been made on robberies, which are inspired by true events like special 26, goodfellas, stander, dog day afternoon and many more movies. These robberies have inspired a lot of movie makers and they have made some brilliant movies on them. These robberies happened with proper planning, style and with an intention to make the place looked completely robbed.

This is one of the biggest robberies in the world, where a group of people faked themselves as the Income Tax officer and looted one of the biggest jewellery store Tribhuvandas Bhimji Zaveri, Mumbai. They robbed around 3-4 million worth of jewellery. The case till date remains unsolved and no one knows who came and looted this place. Special 26, is based on this robbery only.

This robbery took place in Belgium in the year 2003. Antwerp is the place from where 80 percent of the uncut diamonds are exported, and the entire world knows about it, especially the world of the robbers. A group of four smartly dressed robbers came and robbed this place, taking away 123 out of 189 boxes of uncut diamonds. The vault where the diamonds are kept in a lock which has 10 layers of protection, hundred combination codes and still they cracked it. The police could find only one person.

This robbery took place in 1972 and the thieves robbed around 30 million worth of cash. A group of seven men came from Ohio and robbed the bank. They were eventually caught by the FBI.

It is the largest diamond Robbery in The World history, and took place in Amsterdam in the year 2005, where the thieves robbed around 118 Million Dollars of uncut diamond, which were being taken to Antwerp. Unlike the other robberies, this was an unsophisticated robbery, where these men just smashed and grabbed and ran away. The police have arrested a lot of suspects, who were connected with the robbery.

6. British Bank of the Middle East

This robbery happened in Lebanon, when the place was going through a civil war in the year 1971. A group of men robbed the bank and took away 25 million Pounds. 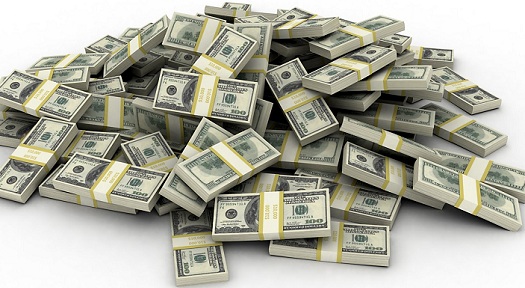 This is one of the biggest robberies in the world history, and took place in Italy in the year 1986. Valerio Viccie, was the man behind this robbery who was an expert in the field and he has robbed more than 40 places before robbing this place. He took away 60 million pounds. He fled again to Latin America, but later came back to England to buy Ferrari and that is when he was caught and was imprisoned for 20 years.

It took place in the year 2007, and when the three guards robbed the bank, took away 128 Million dollar worth of cash and ran away. The police could never trace them and the money was never recovered.

This is the third biggest robbery in the world and it took place in a museum in Boston in the year 1990 where two men disguised as police officers, took away art work worth 300 million dollars. The case till date remains unsolved.

This is the second biggest Robbery in the World History, which took place in London in the year 1990 when a thief keeping a knife at a man robbed 300 million pounds. The man was John Goddard, who was carrying treasury to the bank and was later robbed on the street.

This is the World’s biggest Robbery and it took place in Baghdad, Iraq in the year 2003. The man who robbed the bank was Saddam Hussein’s son Qusay, who went to the bank with a handwritten note from his father and took away money worth One Billion Dollars. Later the US Army, killed Saddam and 350 Million Dollars were recovered and the rest was declared lost.