With the advancement in technology, today most of the people have switched to using the phones to read the news, but they still call for a newspaper at home. Newspapers are something, which has been in use since time immemorial and people still prefer reading news on a newspaper rather than on the small screens. Though a lot of newspapers have become a little biased on the opinions, but they still deliver the news, which are true. It is just the opinion that is biased but that what living in a democracy means. A daily paper is a serial composition containing news, other enlightening features, and more often than not publicizing. An everyday paper is typically imprinted on fairly modest, poor quality paper, for instance, newsprint. The news organizations that classify daily papers are themselves regularly metonymically called daily papers. Most daily papers are immediately disseminated online and also in print.

Here is the list of top ten newspapers in India:

It is a famous Tamil newspaper and has 8.28 million readers in the southern region and circulated 1,679,429 newspapers. S.P. Adithanar founded it in the year 1942 and it circulates more than 17 lakh copies regularly and around 18 lakh copies on Sunday. It has many supplements as well.

It is another Hindi newspaper and has a readership of 7.90 million and circulated 1,768,944 Newspapers. Karpoor Chandra Kulish established it in the year 1956. This newspaper is mostly read in Madhya Pradesh and Rajasthan.

This is a Telugu newspaper and is one of the most read papers in the country with total subscription of 1,812,918. This is a widely read newspaper in the southern region.

This is one of the most read newspapers in the Southern Region, and has 8.80 million readers and total circulation of 2,257,909. It has its headquarters in the Kottayam, Kerala and it has 15 printing centers that are located in different parts of the country.

It is the second popular newspaper in the country and has 14.74 million readers across the country and total circulation of 2,471,844. It is a leading Hindi newspaper and is available in six regions, which are Delhi-NCR, Uttar Pradesh, Mohali, Bihar, Jharkhand, and Uttarakhand.

3. The times of India

The times of India is one of the oldest newspapers in India and have 7.59 million readers and circulated 3,046,504 newspapers. It was established in the year 1838, and is owned by Bennett, Coleman and Company. It covers all the aspect of the news from every corner of the country. 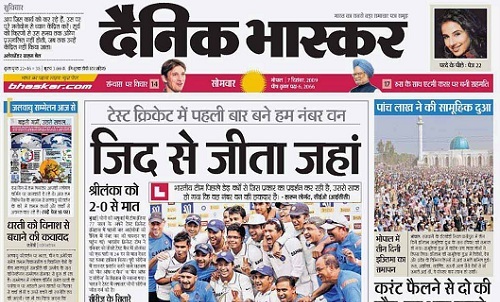