Bhagvad Gita, popularly known as the Gita, is the famous Hindu scripture, which carries the sermon given by Lord Krishna to Prince Arjuna during the epic war of Mahabharata. In this Great War, fought between the Kauravas and the Pandavas, Lord Krishna was the charioteer of Prince Arjuna, the bravest of the Pandavas. When Arjuna came face to face with his brothers, the Kauravas, as his enemies in the war, he was deviated from his path, and Lord Krishna gave him the famous sermon of Bhagvad Gita, teaching him the value of karma in the war between the good and the evil. The sermons continue to be of great importance in the present times too, being the spiritual guide to a complete and fulfilled living.

Here are the top 10 most inspiring quotes from the Bhagvad Gita, which can change your life: 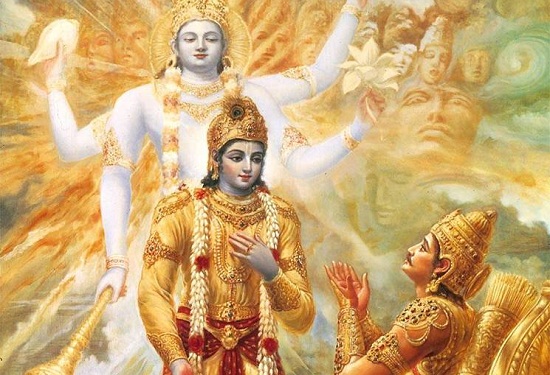 #1. “Know that which pervades the entire body is indestructible. No one is able to destroy the imperishable soul. Only the material body of the indestructible, immeasurable and eternal living entity is subject to destruction; therefore, fight, O descendent of Bharata.”

#2. “While speaking learned words, you are mourning for what is not worthy of grief. Those who are wise lament neither for the living nor the dead.”

#3. “The soul can never be cut into pieces by any weapon, nor can be burned by fire, nor withered by wind”.

#4. “Do thou fight for the sake of fighting, without considering happiness or distress, loss or gain, victory or defeat-and, by doing so, you shall never incur sin”.

#5. “Being freed from attachment, fear and anger, being fully absorbed in Me and taking refuge in Me, many, many persons in the past became purified by knowledge of Me- and thus, they all attained transcendental love for Me”.

#6. “Out of compassion I destroy the darkness of their ignorance. From within them I light the lamp of wisdom and dispel all darkness from their lives”.

#7. “O best among men [Arjuna], the person who is not disturbed by happiness and distress and is steady in both is certainly eligible for liberation”.

#9. “On this path effort never goes to waste and there is no failure. Even a little effort toward spiritual awareness will protect you from the greatest fear.”

#10. “Of all that is material and all that is spiritual in this world, know for certain that I am both its origin and dissolution”.

With these great teachings of Bhagvad Gita, Lord Krishna guided Arjuna through the path of righteousness to be victorious in the war of good against evil. He told him that Karma is the most important aspect of human lives and one should not deviate from the path of Karma due to materialistic pursuits. A person who incorporated the meaningful teachings of this great sermon in his life will definitely understand its true meaning and make his life and afterlife a successful one from the spiritual point of view.