Being home to numerous distinct things, Asia is one of the most celebrated continents in the world that have made its place among the 7 continents on the earth. While it comes to architecture and decoration of the country, the countries of Asia have stood first in the run. Asia is the home to almost 99 percent statues and the remaining 1 percent may be the America as they boast of their Lady Liberty.

The statues represent the divineness, belief symptoms or any influential thing that the world should remember. So here is the list of the Top 10 Largest or tallest Statues in Asia:

Next on the list is the statue from Japan. This statue of the lady represents the goddess of Buddhist, Guanyin. The statue was completed in the year of 1989 and is considered to be the 10th tallest statue on Earth and the 9th tallest statue in the Asia. With the length of almost 289 foot, this statue stands on our list.

8. The Great Buddha of Thailand

This one also belongs to the country of China. This statue is considered to be one of the tallest statues in Asia that took almost 6 years to complete. This statue stands alone on the island of Hainan. The statue of the Guan Yin is glided with the bonze metal and is almost 325 footabove the ground level.

Next statue on the list is the second statue from Japan that is located in Sendai. With the length of 100 meters, this statue is the 6th longest statue in Asia and also in the world. This pristine white statue always remains open for the tourists and an elevator takes the tourists to the top of the statue.

Next on the list is another longest statue in Asia for the year of 2016, is the Emperors Yan and Huang Statue from China its 106 meters. This statue is the 5th tallest statue in the world and also in Asia with the total length of The construction of this statue took almost 20 years to complete and was opened in the year of 2007.

4. Guishan Guanyin of the Thousand Hands and Eyes

The statue from Japan is another one on our list. This statue is considered to be the divine statue for the followers of Buddha. Being completed in the year of 1993, this statue stands erect with the total length of 120 meters. This beautiful statue weighs almost 4000 tons. The statue consists of the 5 floors and a beautiful museum inside.

This beautiful statue belongs to the country of Burma that is considered to be the 3rd largest statue in the whole world and the 2nd one in Asia. With the length of almost 116 meters, it was completed in the year of 2008. Inside this statue, the visitors find 32 floors that are filled with the historical amusements. 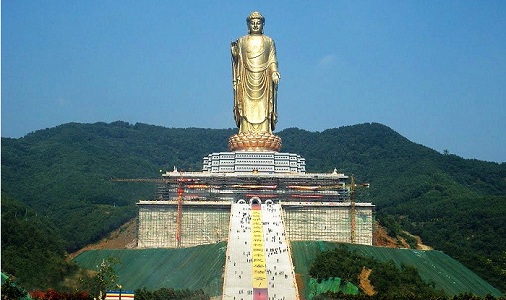 Again from Chia, this statue is the longest statue in the continent of Asia. The statue was built in the year of 2002 and is almost 502 feet This statue gives the breathtaking views of the country side.