For almost 20 years now, Pokémon have been captivating the attention of kids all over the globe. Pokémon are the fictional characters of all forms and sizes who the Pokémon trainers train to combat each other for sport. The name Pokémon was derived from the Japanese brand Poketto Monsutā which means pocket monsters.

Originally, Pokémon is a media franchise handled by The Pokémon Corporation, a Japanese conglomerate between Game Freak, Nintendo, and Creatures. The copyright of this franchise is common between all three of them, but the solitary owner of the brand is Nintendo.

As on date, the Pokémon family contains toys, Trading Card games, video games, movies, animated TV and so much more. Parents also encourage their children to play these games as they boost strategic thinking and planning and stress a lot on making children better sport persons. Also reading is primarily needed in these games so it is another benefit that children can be taught to read.

The Pokémon television show has been one of the popular shows of all times for children and shows the exciting and thrilling experiences of Ash Ketchum and his Pokémon friend Pikachu as they roam in the realm of Pokémon, touring around interesting destinations, interacting with a lot of appealing people and Pokémons. As Ash works in the direction of his objective of being a Pokémon Master, he also gains knowledge about fair play, cooperation, good relations, and sympathy along the way.

There are abundant Pokémon with unbelievable powers, classified in types like normal, water, Dragon, Fire, Flying, Electric, poison etc. but the below mentioned 10 are the ones you should actually be acquainted with.

Muk steals the number 10 spot, is known for Gunk Shot and poison Jab. Also he is the ugliest of all as he is just a huge pile of slime. But if you keep the appearance away, his attack tactics make him the 10th Powerful Pokémon in the sport.

He is the fire Pokémon and steals the ninth spot in the ranking. He is loyal and ferociously brave which is why he is used as Police Dog in the animation. He is also powerful because of his ability to run proximately 10000 kms in 24 hours, its fire fangs and fire blasts. Its roar and the flame burning inside its body make him one of the most powerful Pokémons of all. He is also well-known for its beauty and grace.

Magcargo’s body heat is nearly double than the sun’s. He has the ability to vaporize water if it comes in its contact. He is at number 8 spot as he is capable of turning the rain into steam wrapping the entire place in a cover of thick dense fog. He is not the one to be messed with.

He is the strongest Pokémon in the water nature. He is a dual type pokemon. He is a larger sea creature of water and ice type. He is at number 7 and he is also a great companion only if you can train one. He is known for Blizzards and Frost breath. He is very gentle and loves helping people to cross the huge water bodies. He is trained by Ash Ketchum and can also grow his telepathic capability.

he is the most dangerous Pokémon and is known to cause destruction. He is the most dreaded of all as he is extremely violent, brutal and way too much aggressive. He is known as the devil Pokémon in the Pokémon universe. Though it helped Arceus create the universe, Arceus still put him on exile due to his atrocious powers. But he is gaining fans as well.

It is the most adorable Pokémon. It captures the number 5 slot as it has very loving looks and its powers of traveling freely in water, air and it can make itself hidden whenever it wishes to. It is because he has the genetics of each and every Pokémon making it amazingly powerful as he can easily fight the competitor.

at number 4 slot known for its fighting spirit. It can be trained in anything and he is also the flying fire dragon type. He is known as Lizardon in Japanese. His moves like brick break, Thunder Punch, Earth Quake make him a strong contender of this spot. He is another pokemon owned by Ash Ketchum other than the cute Pikachu. Training him greatly amplified its already frightening power, and it is known to utilize more assails than any other Pokémon. For sure you can count on his capability for a remarkable victory over your already weak enemies.

we have Dragonite at number 3 spot – compatible with fire, Water, electricity, wind. He is the flying dragon also known for his fire breath and Dragon claw. He is incomparable in terms of attack and defense. If trained and motivated, he can wreak havoc on its opponents. The trainers or the masters are just untouchable if they are lucky enough to catch hold of this little monster.

This Pokémon is not only the powerful one but also one of the originals created in the anime. He is horribly tougher than his counterparts. 90s kids would really feel nostalgic about it. He was created using the genes of Mew and has some remarkable capabilities. This anthropomorphic feline Pokémon uses its telepathic capability to inflict mayhem on its enemies. He can capture the mind of Pokémons as well as humans and is also known for removing the memory. He is definitely a strong invention of science. Though there is always a conflict between Mewtwo and Arceus but still Mewtwo is considered as number 2 after Arceus. 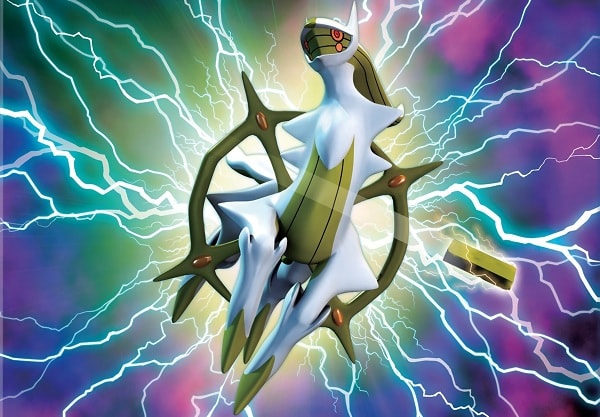 Unquestionably the legendary of all Pokémons. He is the lone Alpha and also known as “The Original Pokémon”. People even refer to him as Pokémon God as he is known to create the rest of Pokémon universe with 1000 arms. Also currently he is not seen with 1000 limbs but then Gods don’t need to show it all. He can change his type simply by holding a plate. His type is Normal but he can switch types at any time. He is known as the coolest of all. He is known to be found only in the wild with a sapphire flute.

This list is quite subjective and it may vary person to person since there are over 700 pokemons that dwell in this pokemon world. There are quite a lot of dominant creatures who can be your best pals or the worst opponents. On the other hand Pokemon shows is basically created for children, but still it can be a lot of fun for the old fans to known about the strengths and stories of its mightiest contenders. All these creatures are surely amazing, but the one who can take all down at once with its moves and countless quantity of destruction is surely Arceus. The strength is basically measured by considering the facts like critical hit rates, defense, attack, optimal move-sets, stamina and so much more. There are some pokemons which are so wild that they can’t be even trained.