Shreya Ghoshal is a leading female playback singer in the Hindi film industry. Currently, she is considered as the highest paid singer in the industry and is held in high regard because of her versatility as she can do justice to all the genres of Bollywood music. 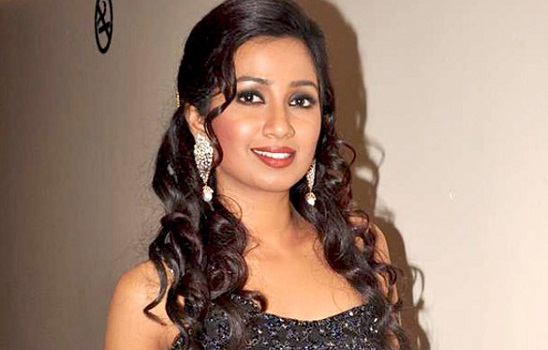 Income Sources: Shreya Ghoshal is one of the most sought after playback singers in the younger generation of Bollywood singers, who makes as much as Rs 7 lakh per song.

Shreya Ghoshal was born in Baharampur in West Bengal and later, her family moved to Rawatbhata in Kota, Rajasthan, from where she did her schooling. Her father was an atomic engineer and with his transfer at Bhabha Atomic Insitute, Shreya migrated to Mumbai to pursue a degree in Arts and English from SIES College. Despite coming from a family with academic background, she was determined to pursue her first love- singing. Shreya was gifted with singing abilities and she was put into formal music training at the age of 6 years, becoming better and better as she grew up. She was a seasoned singer by the time she reached the age of 18 years and was able to win the All India Light Vocal Music Competition in Delhi.

Shreya Ghoshal got an entry into the industry as a participant in the musical reality show called “Sa Re Ga Ma Pa”, which paved way for her to become a leading playback singer in the industry. She was the winner of this prestigious show. Her first movie as a play back singer was “Bendhecchi Beena”, a Bengali movie, which came in 1998. Her first Bollywood movie was “Devdas”, which launched her in a big, big way. Her outstanding singing in this film not only fetched her prestigious honors such as Best Female Playback Singing and RD Burman Award at the Filmfare Awards that year, but also opened the doors of the industry for her. She also won the National Film Award for Best Playback Singing in a song called “Bairi Piya”, which featured in this movie. She went on to sing countless hit songs for a large number Of Hindi movies such as “Munna Bhai MBBS”, “Saaya”, “Jism”, “Tujhe Meri Kasam”, “Phir Milenge”, “Dhoom”, “Krishna Cottage”, “Out of Control”, “LOC Kargil”, “Zeher”, “Parineeta”, “Heyy Baby”, “Ta Ra Rum Pum”, “Om Shanti Om”, “Laaga Chunari Mein Daag”, and the list goes on and on. Besides singing film songs, Shreya has also released several albums including those with devotional songs. She has sung in a wide range of Indian languages besides Hindi, which includes Tamil, Telugu, Malayalam, Bengali and Kannada. Shreya Ghoshal is also regarded as one of the most glamorous playback singers in the industry and she has been seen as a judge on several musical reality shows on the Indian television, including Indian idol Junior, Music ka Maha Muqqabla and Star Voice of India- Chote Ustaad.