India is a peninsula covered on three sides by water and therefore it is prone to flooding. The Geological Survey of India cites that 12.5% of the area of the country falls under the major flood prone areas category. The swell up on the banks of rivers like Ganga, Yamuna and Brahmaputra due to heavy southwest monsoon rains, are usually the reason for the floods in the adjacent areas. Over the past few years, Central India too is experiencing torrential rains and flash floods. 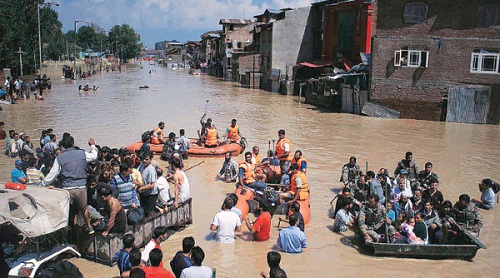 Floods that occur in Himachal Pradesh are in the form of Flash floods. Flooding could happen in Himachal when the catchment areas experience high rainfall, there is heavy prolonged rainfall, if blocking of rivers by Avalanche or landslides happens and if there is a sudden breach or break of lakes and rivers. The rivers running through Himachal are Satluj and Beas, which are prone to flooding year after year. Himachal is considered a flood prone area because overgrazing has made long stretches of the Himalayan rivers in the low lying areas prone to flooding. It has experienced more floods than any other State of which 5 have been really big and caused heavy damage.

Heavy monsoon rains. Gujarat has experienced a disastrous flood in 1979, which killed about 1500 people. This occurred due to the destruction of the walls of the Morvi dam and it has been listed as the worst dam failure in the Guinness Book of World Records. All the major rivers of the State, run through a wide stretch of very flat land for a distance of about 50km before they reach the sea. Since the land is flat and the river basin is low, it is prone to flooding. Almost all areas of Gujarat are flood prone.

The Chennai floods in 2015, was a result of heavy North-east monsoon rainfall and it affected the regions along the Coromandel Coast in the South India. Tamil Nadu, Andhra Pradesh and Puducherry were affected. But, Chennai city in Tamil Nadu was the most hard-hit of them. Unauthorized encroachments in the river beds and the drains, have made Chennai, in Tamil Nadu a flood prone area. The cyclones that occur frequently during the monsoon season are also one of the reasons for floods in Chidambaram, Karaikal and other parts of Tamil Nadu. The El Nino effect has been cited as the reason for the disaster that occurred in 2015.

Cyclones, that originate in the Bay of Bengal, cross the coast near Tamil Nadu, Andhra or Odisha. Along the coast of Andhra the section between Nizampatnam and Machilipatnam are prone to storms, and related hazards. The coastal regions are flood prone. The Delta areas of river Godavari and Krishna too face flood and drainage problems after the cyclones.

A large network of rivers runs through Assam therefore, it is prone to flooding. The river Brahmaputra and its tributaries break banks during monsoon causing floods in Assam. The average area of land affected by flood is about 9.31 hectares, annually. It means that the flood prone area of Assam is four times more than the flood prone areas of India. their lives.

Bihar is flood prone.The river Ganges crossed the danger mark at the Farakka barrage for the first time in 2004 and the rivers like Mahananda, Gandak, Kosi, Bagmati, Burhi, too crossed the red mark. In 2008 Bihar was once again hit by floods as the Koshi river considered as the sorrow of Bihar broke bank near the border of India and Nepal. The areas affected are usually Supaul, Champaran, Araria, Saharsa, Purnia and Madhepura.

Uttarakhand experienced heavy rainfall, which resulted in flash floods and massive landslides in around 9 districts of Uttarakhand. Parts of Kedarnath temple and Char Dham Yatra were damaged during this flood. It was one of the devastating and disastrous floods.

Maharashtra experienced one of the worst floods that claimed a large number of human lives. It was a result of heavy monsoon rains that hit Maharashtra and the worst affected was, metropolitan City of Mumbai. The disaster occurred in the areas of Chiplun, Khed, Kalyan, Ratnagiri, Raigad and Mumbai. Poor drainage system is considered as the major reason for water logging in many areas, which becomes big, when there are heavy rains.

Odisha is located in the Eastern Coast of India and it is prone to floods due to cyclones, storms and tsunami. The rivers in Odisha carry a heavy load of silt and they have a low carrying capacity as a result of which they breach the banks often. This results in floods.

Unexpected torrential rains have been the reason for most of the floods. This is the reason that one state in India is drought hit, while another State is flooded due to heavy monsoon rains. The states that have rivers flowing through them suffer additional losses because these rivers break banks due to high rainfall. Uttar Pradesh, Himalayan region, Jammu and Kashmir, and Bihar seem to be the worst affected areas and down south, Tamil Nadu and Andhra Pradesh seem to be more prone to flooding