India is an agriculturally rich country. Farming is the main source of income for Indians. Almost 60% of the Indian land is being utilized for this agriculture and farming. Sugarcane is one of the most popular crop being produced in India and more or less 5 million hectares land is being utilized only for its production. And why not? India is the second largest sugarcane producing country of the world. Not only producing, India is also exporting this crop as it yields great monetary benefit for our economy therefore sugarcane production is of great importance to our country’s economy.

Apart from being economically important it has other uses too. Normally in summers there are stalls everywhere selling the healthy sugarcane juice. Other than direct consumption it is also used to prepare jaggery, sugar, and even alcohol. The residual fibrous material is then used for making papers and insulation boards and even serves to burn the mud stove in the villages.

The climatic conditions of our country are extremely favorable for the growth of sugarcane. Since it is a tropical plant it requires variations of warm and humid along with dry and sunny. It is because these variations are helpful in ripening and growing sugarcanes. Areas which are severely cold or hot are detrimental for the growth. So the temperature of around 20-27°c is suitable for cultivation. As far as rainfall is considered, areas which receive heavy rain, the sugarcane crop loses its sugar content and in areas of less rainfall is essential for fibrous sugarcane. So to say 100-175 cm of rainfall is sufficient.

Fertile Soil composition with lime on a well-drained land or plain is apt for the cultivation of sugarcane. Water deposits are harmful for the growth.

There are the many varieties of sugar cane found and produced in the Indian subcontinent. In southern part of the country, the growth is of stout quality and produces more sugar and juice as compared to the growth in northern part of India where the quality is thin and the juice or sugar is produced very less. There are a lot of precautions which the farmers take to ensure the good and adequate harvest of sugarcane.

The following are the top 10 largest Sugarcane producing states in the India 2017:

Uttarakhand is ranking 10th for the cultivation of sugarcane among all the largest sugarcane producing states of the country. In a year the yield from this state sums up to 64.32 lakh tonnes. The capital city of Uttarakhand – Dehradun, along with Haridwar which is a prominent religious place are majorly producing sugarcane by covering almost 1.2 lakh hectares land. Other important place being Udham Singh Nagar.

On number 9, we have Punjab which is one of the leading agricultural states of India. The total production of sugarcane in a year is 66 lakh tonnes in an expanse of 90000 hectares. Majority of the sugarcane producing districts of Punjab are Patiala, Jalandhar, Amritsar, Sangrur and Ludhiana of the state. Jaggery is also a by-product of sugarcane and farmers add cumin seeds, black pepper, dry fruits, nuts, and anise seeds to give a different flavor to the jaggery.

Bihar is at number 6th largest sugarcane producing state of the country. 122 lakh tonnes of the crop is cultivated from 2.6 lakh hectares of the land. Besides sugarcane is one of the important cash crop of the state. The regions involved in the production of sugarcane are Gaya, Darbhanga, Patna and Champaran. There are a lot of jaggery and sugar manufacturers in Bihar.

Andhra Pradesh is placed 5th in the ranking of the largest 10 top states producing sugarcane of the country. The climatic and soil conditions are favorable for the production of sugarcane which accounts up to 149 lakh tonnes per year.

With the production of 346 Lakh Tonnes Karnataka stands at number 4 slot among the top 10 states. Almost 4 lakh hectares of land is being utilized for the same. Almost 10% of the total country’s sugarcane productions is credited to Karnataka. Major regions involved in harvesting the crop are Chitradurga, Belgaum, Shimoga and Mysore.

This state is the 3rd largest state of the country which is producing almost 375 Lakh Tonnes ofsugarcane in an expanse of about 2.3 lakh hectares. In terms of the production Tamil Nadu ranks at number 1 as almost 107 tonnes of sugarcane is produced per hectare of land.

Taking the 2nd spot in the list of Top 10 sugarcane producing states in the country, almost 22% of the country’s total sugarcane production is credited to Maharashtra. The black lava soil of this state along with the warm and humid climatic conditions provide for a good ground for the growth of sugarcane. More or less 9 lakh hectares of the land is utilized to produce over 753 lakh tonnes of sugarcane in an year. Main sugarcane producing regions are Solapur, Pune, Ahmednagar, Satara and Aurangabad. 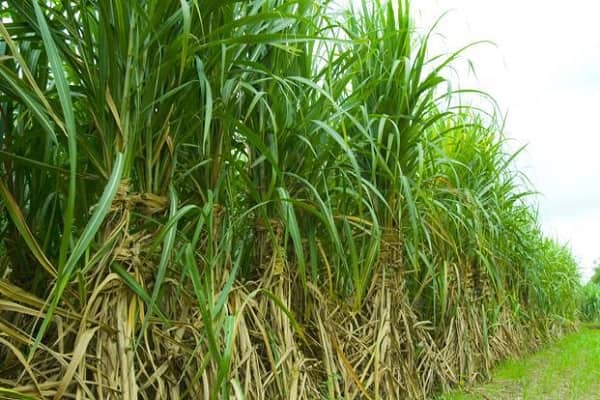 So far India is the second largest producing country of sugarcane. For more and more growth of sugarcane, the stout quality of seeds must be used to enable self-sufficiency as well as for bettering the economy of the country. Proper irrigation system should be in place so that in case there are no rains, water can still be provided to the vegetation. Besides proper pesticides and manures should be used. After harvest it is recommended to extract the juice from the sugarcane or else it continues to get dried up.