India is now turning into a new fashion destination. Being a country rich in cultural diversity, India has now made a position for itself in the world of fashion. Earlier India’s fashion was not really recognized or known widely but now with the emerging trends, things have changed big time. The fashion designers of India have taken the industry to a higher notch and due to these top class fashion designers India is in the list of fashionable countries.

Due to the diverse cultures and backgrounds, Indians are not restricted to a standard dressing style like many other countries. To top it, we also can carry Indian and western dresses quite well. So keeping this in view, the designers have got a huge ground to showcase their creativity. Styles are being mixed and these Indo-western fusions are easily visible in traditional attires.

Masaba launched her designer label “Masaba” in the year 2009. Masaba made her debut in the fashion industry through the Lakme Fashion Week’s Gen Next show for up-an-coming designers. She loves to combine traditional dresses with modern style and ensemble with lightweight vibrant and quirky fabrics and prints. Her designs were an instant hit and Stars like Shilpa Shetty and Bipasha Basu have worn her dresses. She has also won many awards for her modern and stylish looks.

It is one of the biggest labels found in India and has 6 boutiques in all in metropolitan cities such as Mumbai and Delhi. They have contemporary, textile based, modern and Indian Festive collections along with the bridal collection. Ogaan is one such brand which houses the young talent and there are plenty of new and fresh designers working in this brand.

Noted Fashion designers of the industry and have made it large for themselves in the industry. The foremost designers to showcase their creation at the Harrods. Also they know how to grab the attention and fame and gain success thereof. The duo is very creative and exudes talent.

With an experience of designing costumes in more than 300 movies, Neeta has been a very affluent name of the industry. She has been working since 1985 and has been associated with actresses such as Sri Devi, Madhuri Dixit, Salma Agha and Aishwarya Rai. Her dresses and jewelry in Devdas are still admired by people across the country.

Agnimitra has been a name associated with Sri Devi as she designer her personal wardrobe. Eventually she moved to movies and made her debut with Koi Mere Dil Se Pooche. She has designed for Esha Deol, Shonal Rawat, Sonali Kulkarni, Kay Kay Menon and also for Tollywood films where she clothed Mauli Ganguly, Mithun Chakraborty, Swastika Mukherjee and so on. INGA has a plenty of stores in the country.

Surily is known to style Preity Zinta in her movies such as Salaam Namaste, Jaan E Mann and many more. Her work in Saawariya was well appreciated. She made her debut in the Lakme Fashion week in the year 2006 and has been mentored by colleague Manish Malhotra.

The Delhi based designer launched his label in the year 1997. In the year 2005, his label made its debut on London Fashion Week and then at Paris Fashion Week. He infuses the Indian designs and gives them a contemporary look which turns out to be very unique.

It would be unfair if we are compiling a list of Fashion designers and leaving out Sabyasachi. He is a young designer and has been making waves in the fashion industry. He puts gota work, block printing and hand dyeing in use and these indigenous methods have made him gain popularity all over the world.

Founded in the year 1985, Satya Paul has been one of the indigenous designers of Indian fashion industry. The designs are unique and the hues are vibrant. The Ethnic dresses designed by the designer are breathtaking. There are plenty of stores in the country.

One of the foremost Indian Fashion designers to have presented a designer dress collection in Paris. Her style and sophistication cannot be compared to any other designer. She has her boutiques and ready-to-wear lines in Delhi, Bangalore and Mumbai. Internationally, her boutiques can be found in US, Paris and London. She is very natural at designing clothes and has been a renowned name in the industry.

Another well-known name of the Industry which actors swear by. Anita’s dresses are usually inspired by the rich cultural heritage of Rajasthan. The bridal couture and jewelry designed by her are usually high in demand as they give a very royal look. Apart from that her brand AND has been synonymous with modern western wear for women. Kareena Kapoor is the brand ambassador of AND.

Another renowned name in the industry and world. Apparently, Tarun’s designs are the first one to be displayed at the Milan Fashion Week. One of the best brand and many celebrities endorse the same. He is famous in India and also abroad as one of the best Designer Indian Boutiques in India.

Ritu Kumar has been one of the foremost designers of India. She started off in the year 1969 and has now transformed into a brand known to all. Her work has been appreciated all over the country and the world and which is why she was honored with Padma Shri Award in India for her contribution to textile and fashion industry. Ritu’s signature style is amalgamate Indian aesthetic with modern sophistication.

AM: PM was formed 14 years ago when the duo decided to barge in the fashion industry and create a buzz. Use of pure fabrics and vivacious hues, Priyanka put her Degree from London school of Fashion and her experience with a French Label into use. And since then there has been no looking back. They fashion sense is very subtle and classy. Though they have not made a mark in the Bollywood yet, but we can only wait! 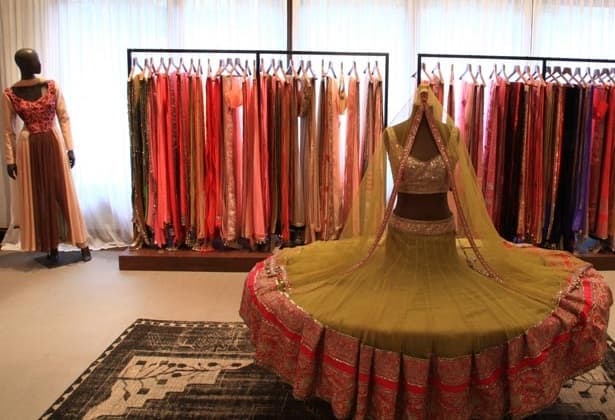 He became a costume designer in Bollywood in the year 1990 and has been a well-known and admired name in the industry ever since. He has worked in over 1000 movies and clothe almost all the leading ladies of the industry starting from Juhi Chawla to Kareena Kapoor Khan. He launched his label in the year 1998 and it gave him a place in the mainstream fashion. His style is typically infusing the Indian hues, embroidery and fabrics and this approach has made him top the list of fashion designers of India who worked on international stages.

Indian designers are now getting recognized in the world for their work and are also leading the fashion industry. It is their creativity and innovativeness that helped them climb the ladder of success. Due to the hard work of these Indian fashion designers, the Indian Designs are now topping the charts and many international celebrities are also seen wearing the Indian ensemble.