Vishnu is one of the three supreme deities and the supreme god of Vaishnavism. He is also coined as Hari and Narayana. He is popularly known as the Hindu Trinity of divinity, preserver, protector and the lord of reincarnation. He is considered as the main member of trimurthi (Branhma, siva, Vishnu). Being an important god of Vaishnavism, he protects dharma and kills enemies by taking avathars. As per the Bhagavatkita, the most awaited Kaliyavatharam of Lord Vishnu will appear on earth when the demons, evil and injustice happens more than usual. 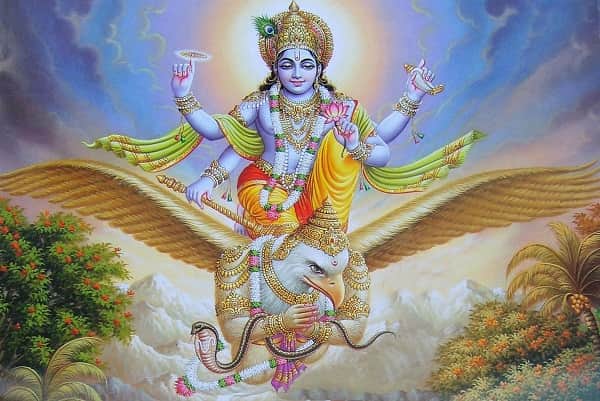 1. The Budanikantha temple is located 10 kilometers from the center of Kathmandu, Nepal. The temple boasts the special stone cravings of Lord Vishnu who sleeps in the center of the cosmic sea. One of the best things about the temple is he is resting on the Shesh Naag in the pond of water.

2. Being an amazing traditional temple, tourists and devotees visit this sacred place every day yet it was under the kingdom of King Pratap Malla once. It is believed that who visit this temple can reach ultimate success and defeat all the enemies in the war. During the last day of a monarch, the king of Nepal didn’t visit the Budanikantha temple, due to which he was defeated by the opposites.

4. He has taken 9 avatars as of now such as Lord Vishnu has been incarnated 9 times so far such as Meenavathar, Machavathar, Koormaavathar, Varagaavathar, Naramsimhaavathar, Parasuramar, Ramavatharam and it is believed that he will take his tenth avatar, kaliavatharam during the kali yuga. This way, his ten avatars matches the order of species starting from fish, tortoise, etc to superhuman in today’s world.

5. One of the interesting things about the asteroid is it is named after Lord Vishnu. The great scientist, Eleanor F. Helin, discovered an asteroid named as 4034 Vishnu. It is a kind of rare asteroid, which resides close to the Earth and found to be the hazardous asteroid of the Apollo group.

The asteroid was discovered by an astronomer in California, United States but they named it after the great Lord of reincarnation. Not just Hindu people, even the Universe starts to believe the existence of Lord Vishnu, such a sacred soul he is!

6. It is believed that Lord Vishnu was cursed By saint Bhrigu once. Once Maharishi Bhrigu was away from his home where asuras took refuge at his ashrama.  Devendra tried to use this great chance to attack and defeat asuras. Meanwhile, the asura group attacked Kavyamata, Bhrigu’s wife. However, she used her power to stay away from Devendra.

Finding it difficult to attack Kavyamata, Devtas seek the help of Lord Vishnu who used the Sudharshana Chakra to cut down Kavyamata’s head and to save Devtas. On seeing his wife death-like condition, saint Bhrigu fumed in anger as he didn’t agree with the truth that Lord Vishnu did atharma by killing a good woman. This is why saint Bhrigu cursed the Lord of reincarnation.

7. Lord Vishnu took the Female Avatar during the period of Mahabharata. He bravely took a female Avatar called Mohini. He took a female avatar and he saved Devatas. Mohini is considered as a very bold girl who is well known for her talent to defeat asuras.

8. Interestingly, she was very gorgeous and attractive that even Lord Shiva falls in love with her and she gave birth to Lord Ayyapan, chill, that’s another story!

9. Lord Vishnu is popular for his Dhasavathars. It is known that he has been incarnated 9 times so far and his last incarnation will appear once close to the end of this world. He is one of the Trimurti, Lord Shiva is the destroyer, Brahma is the creator of the organism and Lord Vishnu is the preserver of the Universe.

10. There is a story behind the birth of Lord Brahma, who was born from the navel of Lord Vishnu. Lord Vishnu is engaged in Meditative sleep for ages and when he awoke, a lotus appeared from his navel which gave birth to Lord Brahma.

11. A traditional temple called Vishnupad, which is known for the 40 cm footprint of Lord Vishnu. The footprint indicates 9 symbols including chakram, Gadham, and Shankam.

12. The Vishnu Basement Rock in Grand Canyon is named after Lord Vishnu. It is also called Vishnu complex or Vishnu metamorphic complex.

As he is one of the five primary gods of Hinduism, he is worshipped as the preserver of Humanity. Every time, human being faces injustice, he takes a new avatar to kill demons and preserve justice and humanity. He is mostly worshipped by the Hindu people.

This sacred soul has many temples all across India and some in other countries as well. Badrinath Temple, Jagannath Puri temple, Dwarkadish temple, Kesava Deo temple, Thirumala Venkateshwara temple are some of his popular traditional temples.