One of the gifts that the country receives are the Natural resources. These natural commodities are the reserves of various kinds of minerals that are present in the nature organically. These resources not only facilitate the survival of human beings but also the fulfillment of desires. The most prosperous economies of the world are blessed with such resources that they produce and sell it to the world. Thus they are extremely beneficial for a nation’s economy as well. These resources could be expensive and rare or could be common and cheap but they have a value of their own.

Due to the advent of technology and other developments such as rapid rise in the population, there is a major threat to these natural resources. These are getting consumed at a faster rate. These are extracted from the earth’s core and are worth so much. These natural resources could be, crude oil, coal, diamonds, natural gas and many other minerals.

Below is the list of top 10 countries which have the largest reserves of natural resources.

Number 10 on our list is the South American nation – Venezuela, with almost $14.3 trillion worth of these natural resources. It is almost similar in size as compared to Texas. The major ones being natural gas, iron and oil. This country accounts for almost 2.7% of the worldly supply of natural gas making it 8th country in the world. Besides the 7.4% of supply throughout the world of oil reserves gives the 6th rank.

Number nine on our list is Iraq. Almost about the size of California, this country is known for its oil reserves. Almost $15.9 trillion worth of organic resources such as oil and phosphate rock are extracted from this country. The country accounts for 9% of the total oil deposits of the world. Besides, it also holds the reserves of phosphate rock making it one of the few countries to have such reserves. Many reserves are untapped and yet to be discovered as there had been so many political differences.

With the reserves of iron ore, copper, timber and coal, Australia stands at number eight. These are worth $19.9 trillion. Apart from these Australia also is the world leader in producing the expensive metals such as uranium and gold which accounts for 46% and 14.3% of world demand respectively. Australia also shares some of the natural gas off shore reservoirs with Indonesia. Australia has made itself into a self-sufficient country by obtaining wealth from these reserves.

Only a bit smaller in size as compared to the United States, Brazil ranks on the number 7 on our list. The organic resources account to be almost $21.8 trillion. The reserves of uranium and gold are two important natural resources. Iron reserves make it the second largest producer in the world. Deposits of oil are also present and the exploration of more is going on. Timber is the best natural resource which is worth $17.45 trillion and almost 12.3% of the global supply is done.

Number 6 on the list of China with almost $23 trillion worth of organic resources. Most of which are coal and rare minerals found in the earth’s core. But, timber has its importance too as it is also one of the major resource China is blessed with. With an area as much as United States, China is also being considered as one of the developing superpowers of the world. In the times to come, the economy of the country is expected to grow owing to the Shale Gas reservoirs which are lately discovered.

Iran ranks fifth on our list with almost $27.3 trillion worth of natural resources. Main resources being natural gas and oil which is almost 16% and 10% of the world’s supply respectively. Iran and Qatar due to their proximity to one another, share their resources of gas fields. Besides the location of Iran on the great Persian Gulf ensured vast reservoirs of natural gas. This country is almost the size of Alaska but is making some fine moves in the international business.

The total worth of natural resources of the country account to up to $33.2 trillion making it the fourth largest country with most natural resources of the world. It ranks second after Saudi Arabia in the global oil supply which accounts to up to 17.8%.Uranium and timber are also the most valuable resources where the country ranks worldwide on 2nd and 3rd position respectively. Natural Gas and phosphate also count for the large reserves Canada has. This country is almost similar to the size of US and has great natural reserves.

Natural resources and Saudi Arabia are kind of synonymous with each other. This nation accounts for almost 20% of the oil reserves in the world, and natural gas reserves accounts for the fifth-largest reserves in the world. Timber is also one of the major natural resource. The total worth of these resources could be around $34.4 trillion. This country is almost the size of Canada and known as the heart of the Muslim community and the crown of the Middle Eastern countries of the world.

2. The United States of America

The number 2 superpower of the world – US stands on the number 2 of the list with the resources worth $45 trillion. 31% of the coal reserves of the world are found in the US. Also, the large reserves of timber. A number of natural resources such as natural gas, gold, oil and copper are also found in respectable quantities. 89% of the nation’s organic resources come from timber and coal. The country is blessed with good weather and climatic conditions due to which you would find forests which are helpful in producing timber. 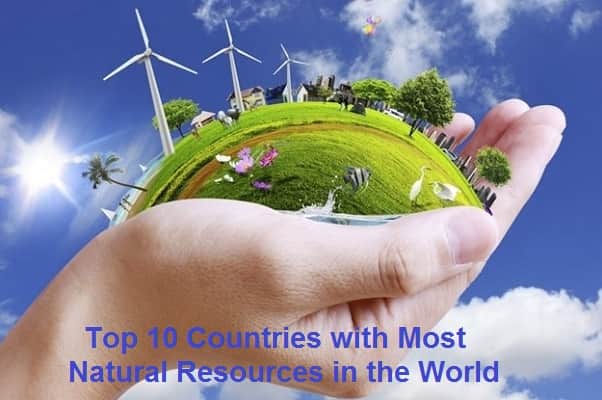 Number one on the list is Russia. One of the super powers of the world, Russia accounts for almost $75 trillion worth of natural resources. Twice the size of US, this country has coal deposits, natural gas and oil and most importantly timber and gold. This nation accounts for the huge reservoirs of Gold and coal and ranks on 3rd and 2nd largest reservoirs of the world respectively. Many earthly minerals are also found.