India definitely consists of some beautiful monuments, temples as well as magnificent sceneries in the middle of snow-covered Himalayas. Besides this, India is also recognized for its several mysterious caves in many states. Some of these caves possess spectacular statues and figures, whereas some of them have the pillars and stalactites.

These caves are also the optimum instances of innumerable kinds of an architecture of ancient times including certain truly captivating Buddhist teachings and life habits. If a person gets a chance to explore these caves, he/she will not get mesmerized with this amazing experience but also get to know about the heritage of India:

The following are the top ten mysterious caves in India you must see once in your life:

Vaishno Devi is one of the most famous cave temples and holiest Hindu temples in India that is valued and worshiped by the millions of people. These are situated in the Katra region of the Trikuta Mountains in the Jammu and Kashmir at the height of 5300 ft. above the sea level.

These caves are located in the Jalgaon region in Maharashtra which comprises of 30 rock-cut Buddhist caves built in the second century B.C. Ajanta Caves have numerous statues and attractive pictures that symbolize the finest instances of the Indian paintings and art encouraged by the spiritual skill of the Buddhists. The caves were also got registered under the UNESCO in the year 1983.

Ellora Caves are located in Maharashtra which is famous for its epic caves. It is also a World Heritage Site by UNESCO. There are 34 caves which have been dig-out from the Charanandri Mountains. Here, you will get to see the Jain, Buddhist, and Hindu rock cut temples with some truly stunning viharas which were constructed in the fifth and tenth century. These spectacular caves were made in the course of the rule of the Rashtrakuta and Chalukya empires. The cave temples of Jain were constructed by the rulers of Rashtrakuta.

The Badami caves are located in Badami town of Karnataka. You will find here numerous cave temples here which are all manufactured out of the Badami stonework over a hill in the sixth and seventh centuries. It also showcases a flawless depiction of the rock cut architecture of India along with the Badami Chalukya structural design.

Elephant a Caves are located in the Mumbai Harbour of Maharashtra. These are basically a group of stunningly and proficiently carved caves over the Elephant a Island. You will find two types of caves here i.e. Buddhist Caves and Hindu Caves which belongs to the 5th and the 8th century. It also comes under the world heritage sites by UNESCO.

These caves are situated in the Orissa near Bhubaneshwar which is natural and man-made. Udayagiri and Khandagiri Caves possesses a high spiritual and archaeological significance also. You can see convolutedly and ornamented statues as well as creations here. As per the ancient tales, these caves were originally designed as a home for the Jain monastics when King Kharavela governed the region.

These caves are located in the Vijayawada city of Andhra Pradesh which is an impeccable sample of the Indian rock-cut structural design. The Undavali caves are made out of the sandstone in the fourth and fifth century AD. Besides this, you will also get to see a big spectacular statue of the Lord Vishnu in a resting position here.

The next name in the list is of the famous Amarnath caves which are located in the Baltal district of Jammu and Kashmir state in India. This is also one of the main tourist’s attractions in India. Amarnath cave possesses the ice pillar which is created from the cold water while falling from the roof to the floor. This ice pillar resembles the Shiva linga which makes it famous among the Hindu religion.

These caves are located in the Raisen district of Madhya Pradesh in the Ratapani Wildlife Reserve. It is also a world heritage place registered by UNESCO owing to the utmost original traces of the human being in the Indian sub-continent. Bhimbetka Rock Shelters is one of the most stunning caves which also showcase the initial traces of the origin of the dance. These caves were founded by the V. Wakankar. 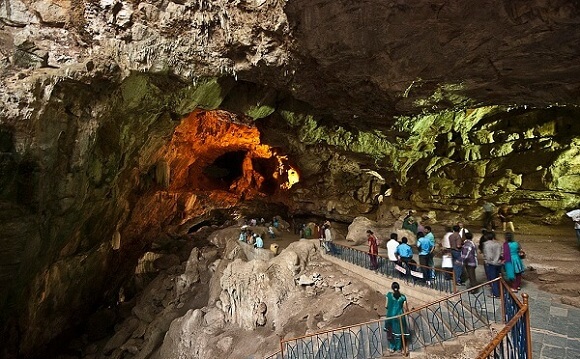 The top name in the list is of Borra caves which are situated in the Vishakapatnam region of Andhra Pradesh. It is also recognized as Borra Guhalu in the language of Telugu. These caves are one of the largest in India which is standing at a height of 705 meters. The founder of the Borra caves was Sir William King who was a team member of the Topographical Survey of India.