Poison has been around for centuries. It has been used to kill people even in the ancient times and many literary classics involved poison at one point or another. Poison is also widely used in movies and on television – especially in detective stories and movies about secret agents.

Not too many people know that it takes a lot of research and scientific ability to make poison. Poison is actually manufactured. This list dishes out the 10 most dangerous poisons in the world. Be careful not to come in contact or get near any of them.

This poison is derived from extracting castor oil seeds. While eating castor seeds in small doses is not deadly, a high amount of ricin causes death. Risin is poisonous because when inhaled and injected into the body in large amounts, it blocks the body’s protein. This prevents cells and tissues to build up and repair themselves. It results to shock and sepsis. Hence, the poor victim dies.

Amatoxin is a poison found in a certain species of mushrooms. It is extremely harmful for the body. It poisons the blood and prevents it from reaching the brain. After a few days, the poor victim falls into a comatose which is often times non-reversible. The victim soon dies as an effect of amatoxin poisoning. This is why certain species of mushrooms should not be eaten.

Sarin is a lethal gas that is commonly used as a chemical weapon of mass destruction. It was manufactured before the outbreak of the second world war. This was used by Nazi Germany in wiping out what they then called as “inferior races” – such as the Jews, gypsies, Slavs, and other minority people. Sarin has actually been around for quite some time and has been used also during the Iran-Iraq war.

Cyanide poisoning is fairly common in many countries. It is primarily harmful to the heart and to the nervous system. It blocks healthy blood flow and heart function. When this happens, a lack of oxygen and blood occurs in the nerves and this shuts the body’s functions off one by one. Cyanide poisoning has happened also among fishermen who resort to cyanide fishing. It also poses threats to the environment.

This uncommon substance is usually found in laboratories. It is in powder form and poisonings usually take place due to ingestion. When ingested, the poor victim suffers from extreme nausea and vomiting. Death almost always occurs less than an hour after initial poisoning. This is why masks are very important when one enters an unfamiliar laboratory.

This poisonous substance is found on pupperfish. It is usually transmitted to the body when one is stung or steps on a pupperfish. Pupperfish emit this primarily as a defense mechanism. The poor victim who comes to contact with this substance paralysis and difficulty in swallowing at the onset of the poisoning. This then worsens to severe breathing problems. This then leads to death in a matter of hours when the victim is not taken to a hospital.

VX is a type of pesticide that is very dangerous to the body. Most cases of VX poisoning occur among farmers and horticulturalists who use chemical pesticides in maintaining their farms. FX poisoning produces flu-like symptoms but quickly advances to death in just a matter of a few hours.

Manufactured in the laboratory, this is considered to be a weapon of mass destruction. It can kill up to a billion people when spread through water or through the air. 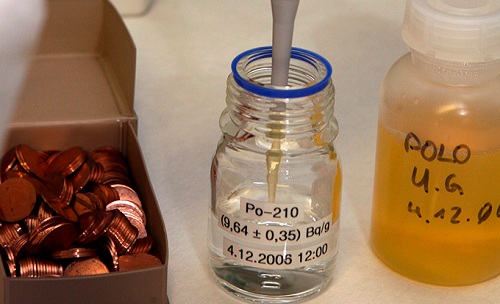 The deadliest poison of all is enough to wipe out entire cities or even countries altogether. It is highly toxic even in small amounts. Polonium is kept in the laboratory and should never be handled outside.