Potato is one of the common food crops of the world. They are also used in various industries for starch production, alcohol production, etc. The potatoes have several helpful characteristic like weight gain, healthy skin, increases immune power, prevent kidney stone and control blood pressure among other characteristics. There are several kinds of potatoes available in India. Potato is winter season crop and tolerates frost moderately. They can be cultivated in wide range of soils.

The potato cultivation requires extensive soil preparation. The 10 largest quantity of potato producing states in India are listed below. 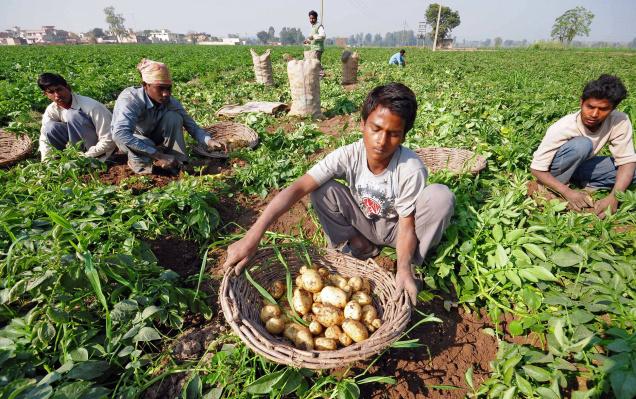 Jharkhand is located on the eastern part of India with Ranchi as its capital and it has a total of 24 districts.  This is the 10th largest potato producing states in India. The Jharkhand state has a total area of 79,710 km squares out of which 42.21 hectares are involved in the production of potatoes. It gives a yield of 13,972 Kilogram per hectare. The production of potatoes in the states is amounted to 659.61 tonnes per year.

Haryana is one of the northern states of India and it is also one of the largest potato producing states in India. It has 21 districts and the capital of Haryana is Chandigarh. The total area covered by the state is 44,212 km squares and the area in which the potato cultivation is done covers about 29.47 hectares. This state gives the yield of 22,939 kilogram per hectare. The state produces about 676.01 tonnes per year.

Karnataka is located in the southern part of the India. The number of districts in Karnataka is 30 and the capital of Karnataka is Bangalore. The total area occupied by the state Karnataka is 191,791 km squares and out of which 44.4 hectares are used for the production of potatoes. The yield of potatoes in this state is 15,727 kilogram per hectare. The amount of potatoes produced by Karnataka accounts to 698.30 tonnes.

Punjab is located in the northern part of India and is one of the largest potato producing states. It has a total of 22 districts. The district Chandigarh serves as the capital for both the states Haryana and Punjab. This state covers total area of 50,382 km squares and the potato production occupies area of 85.25 hectares. The state produces a yield of 25,012 kilogram per hectare. The total production of the potatoes by Punjab in a year is 2,132.32 tonnes.

Bihar is located in the eastern part of India and it has 38 districts totally.  They capital of Bihar is Patna. The Bihar state covers a total of 94,163 km square out of which the area used for potato production covers 322.5 hectares. The production of potatoes in this state is 6640.60 tonnes per year and the yield of potatoes is 20,593 kilogram per hectare.

Uttar Pradesh is the most populous state in India and it is abbreviated as UP.  The number of districts in this state is 75. The area covered by this district is quite large and 603.76 hectares is used for the production of potatoes. This state produces 14,430.28 tonnes of potatoes per year and the yield of this state is 23,901 kilogram per hectare.

So these are the best Potato producing states of the country which meet the national and international demands easily.