Paresh Rawal is one of the most versatile and talented actors in the Hindi cinema, who excels at performing all kinds of roles, such as comedy, negative and character roles with equal ease. He has recently joined politics and gained success in this field too. 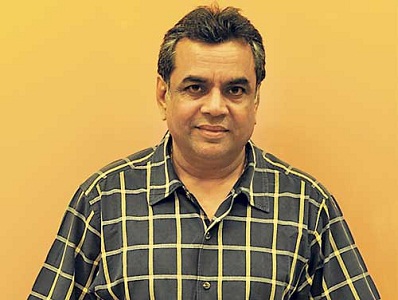 Income Sources: Paresh Rawal has amassed huge wealth during his acting career, which has spanned a period of more than three decades now. he has also tried his hand at television and film production, besides starting a career in active politics.

Paresh Rawal was born in Ahmedabad and he hails from a Gujarati family. He pursued his education in Mumbai, where he went to Narsee Monjee College of Commerce and Economics. After a successful stint as one of the best film and television actors in india, Paresh rawal has joined active politics as a member of Bharatiya Janata Party and has also won the 2014 Lok Sabha elections from the Ahmedabad east constituency in Gujarat.

Paresh rawal is a leading character actor in the Hindi and Telugu film industries. His career in the industry started in 1984, with a supporting role in a movie called “Holi”, but success actually knocked his door with the 1986 film called “Naam”, in which he was cast as a cold blooded villain. Paresh became a household name after that and had a line of film makers waiting to cast him in their movies. Since then, he has appeared in more than a 100 films, showing a different shade in each of them and today he is regarded as one of the most hilarious comedians in the industry. One of the best performances of this classy actor came in “Hera Pheri”, a 2000 release, which made the audience literally laugh their guts out. The movie was a phenomenal success and also fetched Paresh the Filmfare Best Comedian Award. Some other notable works of the actor are “Phir Hera Pheri”, “Baazi”, “Daud”, “Ram Lakhan”, “Aankhen”, “Garam Masala”, “Aawara Paagal Deewana”, “Andaaz Apna Apna”, “Malaamal Weekly”, “Golmaal: Fun Unlimited”, “Tamanna”, “Hulchul”, “Bhool Bhulaiya” and the list is almost endless. The best thing about the actor is that each of his movies presents him in an absolutely different avatar. In addition to these commercially successful movies, Paresh Rawal has been recognized the world over for portraying the character of Sardar Vallabhai Patel to perfection, in the Ketan Mehta film “Sarkar”. His movies “Sir” and “Who Chokri” also fetched him the National Film Award for the Best Supporting Actor category. The 2012 release “OMG Oh My God” is the shining gem in the career graph of this amazing actor, who left the audience speechless with the stupendous performance in the movie. He has also worked in Gujarati theater and produced some successful television serials too.