When it comes to distinguishing the countries, one of the most used factors is their currencies. The scale on which a currency is used marks the possibility that the country is perhaps, leading to become bigger and a world super power. Therefore, we brought you a list with top 10 most used currencies in the world.

These currencies are having said to be the maximum contributor in world’s daily transactions and the world trade.

The Krona has been the national currency of Sweden since it was first introduced in 1873. The Krona has a share of 2.2% in the total transaction all around the world. The Krona has gone through a series of inflation in the 1800’s but it is safe to say that the Swedish Krona has come a long way only for the good.

Ringed is also one of the most used currencies in the world. Thanks to the tourism in Malaysia which contributes in the extensive use of Malaysian Ringed. It makes up almost 2.9% of daily worldwide transactions.

Canadian Dollar has a share of 5.3% in daily transactions across the world. Until the 1800’s, Canada did not have a currency of its own, in fact, currencies from a different part of the world such as- French, and British were being used in Canada. But the Canadian Currency began its journey until after the confederation which brought together a branching system of banks particularly binding small provinces. The banking system was a total hit in decades to follow which made the government realize a fact that it needs to have a central institution in order to run the currency and banking system. This is what gave rise to the Central bank of Canada and the Canadian dollar.

Until about one and a half-century ago, the provinces in France would produce and run their own currencies and as you can imagine, it was a total chaos. It wasn’t until the first federal constitution in 1848 that a common currency was chosen for every province of France. However, the history of Swiss Franc wasn’t as fluent as it sounds. In between 1876 and 1901 several agreements and acts were meant to be passed in order to establish a central bank so that the currency and banking system could be managed as one whole institution. However, none of the laws or acts was passed successfully until 1905. Today, the Swiss Franc has 6.4% of share in daily transactions all around the world.

If we refund back to a little later than a century ago, Australia did not have a fixed currency that was issued by a central bank. In fact, a number of privately established banks would issue the Australian currency. This continued to happen until 1922 when a Commonwealth Bank of Australia was established yet it wasn’t a central bank and thus, didn’t hold the rights to publish currency. But it wasn’t much later in 1942 when an act was passed and the bank was renamed to be called as the Reserve Bank of Australia. It was in 1942 that the bank got its control over issuing and publishing not only to make it one of the world’s most used currencies in 2018. The currency has a share of 7.6% of daily transactions all around the world.

Coming onto the fourth position is the British Pound which is known as the Pound Sterling. It has a share of 13% of total transactions in the world on a given day. The Bank of England was established in 1694 which makes it one of the oldest Central Banks in the world. Not just the bank but it also makes the British Pound one of the oldest and still continuing currencies of the world. It is said that the British Central Bank bean publishing notes the very same year and has been through a series of changes in the currency’s look and symbols. Also, the Bank of England is established in Thread Needle Street ever since it was shifter there backing in 1734.

Japan has always been a strong and powerful country but always behind the limelight yet working its way up. So has happened with the Japanese currency called, YEN which has a total share of 19% in worldwide transactions all around the world. The YEN was established in 1871 when the Japanese government declared it as their national currency. The Japanese currency YEN was finally adopted after the Bank of Japan was established under the Bank of Japan act under Japanese constitution. The act has been amended several times however; the currency has stayed the same and became the third most used and traded currency in the twenty-first century. 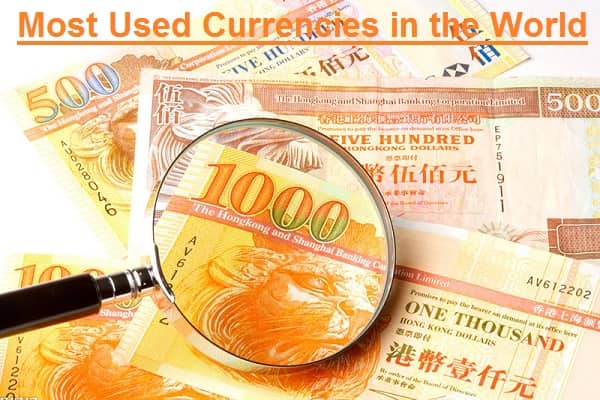 When speaking of world’s most used currencies, it is hard to imagine a currency other than the US Dollar on the top of the list. According to a survey, almost 85% transaction of the world is done in US dollars. It was much later after the release of first American Currency that the present US Dollar has gained so much fame and transactions in the world. After suffering from a serious inflation in the late 1700’s and continuous failing banking system in the 1800’s it is safe to say that the US Dollar has come a long way and survived through the toughest of the droughts to be the world’s most used and traded currencies centuries later.