When we talk about life in particular, it is happiness that we are all seeking. But the happiness in particular is not in our own hands, in fact, it is most importantly concerned by the country and atmosphere we live in. How about going through a list of top 10 countries with best standard of living where you do not have to pay high taxes or expensive schooling, but pure happiness and clean air to breathe? The list given below is so fascinating that it will make you want to live in one of the countries mentioned in it.

The list of these top 10 countries is based on the standard of living which includes affordable medical and educational expense, to controlled population which means a better per capita income. Read on to discover these 10 magnificent countries which are the best places to live in this world.

Without getting into the technical terms of the degree of happiness of Switzerland, we all know the mere sight of Switzerland is enough to make its citizens feel super privileged. The beautiful gritty streets of Switzerland and its pollution free atmosphere will make you fall in love with the life of Switzerland. It is the most business-friendly, culturally rich, and technologically advanced yet deeply connected with nature, admiring art and education equally; Switzerland is one of those countries which offer you life in true terms. The Gross Domestic Production of Switzerland per annum is- $659.8 billion with only 8.4 million populations. This most definitely means that the citizens of Switzerland have a fair share of income to themselves.

Accompanying the fact that Germany is one of the countries where the quality of life is most preferred is also one of the richest countries in the world. Almost 90% of the German population is GED educated and an average person lives above mediocre life with luxury and no stress. According to a survey, the happiness level of the citizens in Germany is 88.45%. Students and graduate in professional degrees from all over the world come to Germany looking for entrepreneurship opportunities. The recent year’s GDP of Germany was $3.t trillion dollars with a population of 83 million people.

It must be a hard fact to believe but Singapore has been on the first position for past years on the basis of the quality of life. It is most unfortunate that it has dropped down to eighth places in 2018. The reason behind this regression is the considerable increase in the cost of living for an average person living in Singapore. Besides this recent increase in the cost of living, Singapore offers a lifetime of opportunities to every category of person with a creative eye. Singapore has a population of 5.6 million with the GDP of the bygone year of $297 billion. This means that an average person of Singapore earns $87,832 per annum which is enough to lead life happiness.

Almost a decade ago when the Czech Republic was on the top of this list, expats from all over the European continent and the world immigrated to the Czech Republic in order to taste the life of happiness and fewer expenses. The cost of education at the Czech Republic is most affordable in comparison to anywhere else in the world. The annual gross production of Czech Republic is $192.9 billion with only 10 million populations. Therefore, the per capita income of each person is sufficient to let its citizens enjoy a life of satisfaction.

This country is most famous for its magnificent landscape which includes the golden gritty land surrounded by the crystal blue waters. The golden and blue landscape will take you back to the days of Aladdin and his genie. It used to be on the third spot of this list, Malta now stands on the sixth position due to the recent increment in work-life tension. Also, what has changed is the equilibrium of life between works and household that has created a shift in its happy persona.

This South American country is most expected to be a happy country given its warm weather, sandy beaches, and mystical blue waters. Costa Rica, also known as Corsica has recently been added to this list given its recent advancements. It is the local culture of the Costa Rica which attracts maximum tourism from all across the globe. The increasing tourism has resulted in the increase of the GDP and therefore, a better per capita income.

We not only love the beaches of Spain or the sweet pineapples but the entire country of Spain. Spain is most famous for its warm weather, the rich culture and humble citizens who make you feel at home for every traveler from around the world. Spain is the country with the highest ease of settling in the world. With a GDP of $1.2 trillion, Spain has a population of merely 46 million people that brings us to a fact that the per capita income of an average citizen in Spain is $36,347.

It is not unknown a fact that Japan is the fastest growing country in the world. After suffering from most horrible tragedies, such as the destruction during the World War 2 or the destruction caused by Tsunami in 2011, Japan is back on its feet faster than the world expected. In fact, Japan was at the seventh position until last year and upgraded to the third position due to the improvement in its transport infrastructure. Japan is on the list of highest quality of life because of several reasons which include peaceful life and affordable medical care.

Before mentioning the fact that Austria is one of the richest countries in the world, there is another fact that makes Austria the second best country to live in. That reason is the pollution free atmosphere of Austria, the clean air that the citizens of Austria breath is so pure that they hardly ever fall ill due to any airborne diseases; the same goes with the purity of water in Austria. Besides having state of the art infrastructure, the medical care and cost of education in Austria is minimal. 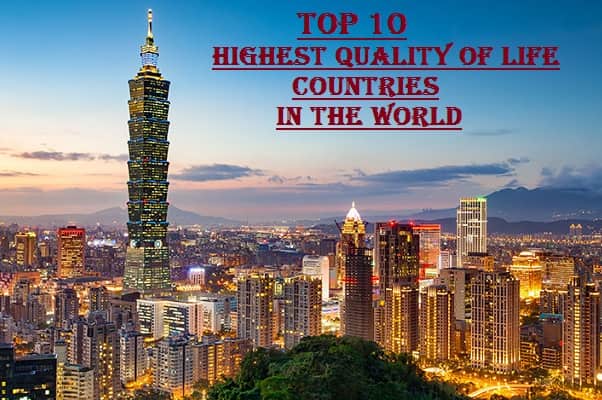 The country which has topped the first position on our list is the Asian country, Taiwan. The beauty of Taiwan is nothing in comparison to any other place in the world. The medical care of Taiwan is most affordable than anywhere else in the world.

A country where the medical treatment is affordable, it is hard to stay unhappy.