To measure the economic health of the country, we use a parameter called GDP. GDP stands for Gross Domestic Production and it is basically the value of the finished goods and services in terms of money. It can be said that GDP is a measurement of economic activities of the nation and hence any change in GDP from one quarter to another or from one year to another can be termed as growth in GDP.

Most of the times, the inflation is adjusted so as to get a real comparison of GDP among countries. In the age of globalization, it is necessary to have the accurate figures that could help in comparison of economies and judge the standard of living. Initially, in 2017, the growth of the global economy was set at 3.2% and as per IMF, 2017 isn’t turning out to be the better year either.

Here is the list of top 10 fastest growing economic growth countries in the world.

On number 10, we have Djibouti and the growth rate of GDP for Djibouti is 7%. In addition to this, it is basically an African nation and it is located at the border of Ethiopia. The country is not very rich in natural resources and that is one of the reasons why the economy here is dependent on the service industry. The country follows a free trade policy which helps in growth of the nation. The country is taking various initiatives to attract foreign investments as the service dominated economy can surely benefit a lot from the FDI.

We have another African Nation on our list and for Tanzania, the growth in GDP is expected to be a little higher than Laos. The statistics stand at 7.1% and you would be surprised to know that Tanzania is a really poor nation and it also lacks natural resources. The economy of Tanzania is dependent on the mining industry and gold is one of the most mined minerals in Tanzania. Since 2008, Tanzania is growing at a fast rate and it is really doing well because of banking, tourism, and telecommunication sector.

Talking about Myanmar, the country’s GDP is growing because of increase in exports and economic reform. Myanmar also has a high FDI and all that is because of the economic reforms brought in last few years. As per the statistics, the GDP of Myanmar is growing at a rate of 7.4% and it is surely a great growth rate for the country that is not very high on resources.

The expected growth rate of the economy of Uzbekistan is 7.4% and it is very close to Myanmar. The country is located in central Asia and it is surrounded by countries like Afghanistan, Kyrgyzstan, and Tajikistan. The reason for the high growth of Uzbekistan is that the country has the fourth largest gold deposits in the world and the mining industry forms the base of the economy of Uzbekistan. The country has high reserves of oil and gases as well which further intensifies the growth in the GDP.

On number 5, we have India. As per the growth forecast, the economy of India is growing at a pace of 7.7% in 2017 and it is also the world’s 7th largest economy. In addition to this, India adopted the policies of liberalization, globalization, and privatization in 1990 which lead to the growth of the nation. The present government headed by Mr. Narendra Modi is launching schemes like Make in India which is helping in increasing the GDP significantly. It should also be noted that India is one of the most attractive destinations for FDI and this also accounts for a higher growth factor of country’s GDP.

We have another country from western Africa and Ivory Coast has a growth projection of 8.5%. In addition to this, the tourism plays a major role in the development of Ivory Coast. There was a period of recession and economic turmoil in the 1970s but the country got out of it and today, it is among one of the fastest growing economies in the world.

Ghana is another African Nation on our list and the expected growth rate for the country is 8.1%. The country is heading towards a higher political stability which is forming a strong foundation for the economy of Ghana. In addition to this, the economy of Ghana is dependent on chocolate, gold and oil reserves which is surely helping the nation in advancing forward. The growth for the country had been slow in recent years but this will easily be compensated in the coming years.

On number 2, we have Ethiopia and the country has a GDP growth rate of 8.7%. In the past, the country’s GDP grew at the rate of 10.9% and hence the target is easily achievable for the country. The country has a location which helps it in trade and that forms the base of the economy of Ethiopia. 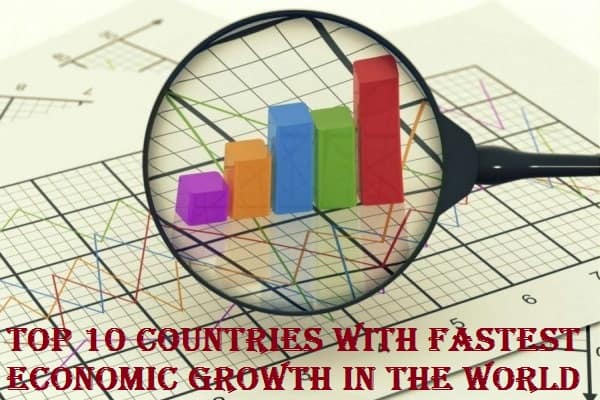 The fastest growing economy in the world is not China but it is Bhutan. You might be surprised by this ranking but the fact is that Chinese economy has already been saturated. Bhutan relies on Gross National Happiness and it accounts for the growth of the nation by the happiness index. It is the only country to do so but as per an estimate, the GDP growth for Bhutan is going to 11.1% in 2017. The country is surrounded by India, China, and the Himalayas but it shares good ties with India. Bhutan’s economy is dependent on the agriculture and it also exports hydro-electricity to the neighboring countries. It is also a country with lowest carbon footprints in the world.

These were the fastest growing economies in the world. The next year, the ranking would not change significantly and there is going be a little difference between the actual and the estimated growth. So what do you think about it? Do it let us know in a comment.