Prime Minister Narendra Modi launched Swach Bharat Abhiyan in October 2014 and the aim of the campaign was to create a nation which is clean and hygienic. This was the first time in the history of India when a Prime Minister held a broom to clean the surroundings. The idea as to encourage people to keep the environment clean so that India can match the foreign nations in terms of cleanliness. Government Employees, Students, Adults and everyone else came forward to help India in becoming a clean nation. Since then, there had been a lot of improvement and every year a survey is held to find out the cleanest and the dirtiest cities in India. This works as an encouragement for the clean cities to keep up the good work and the dirty cities are shamed on the public platform so that the improvements can be made in cleanliness standards.

The government recently came out with another list of top 10 cleanest and top 10 dirtiest cities in the country. Fifth percent of these dirtiest cities are present in Uttar Pradesh and it is clear that Uttar Pradesh needs to work really hard to become a place which would appeal to the eyes of people. With new Chief Minister, it can be expected that the work of cleanliness will trigger at a faster pace.

So let us now have a look at the top ten dirtiest cities in India. 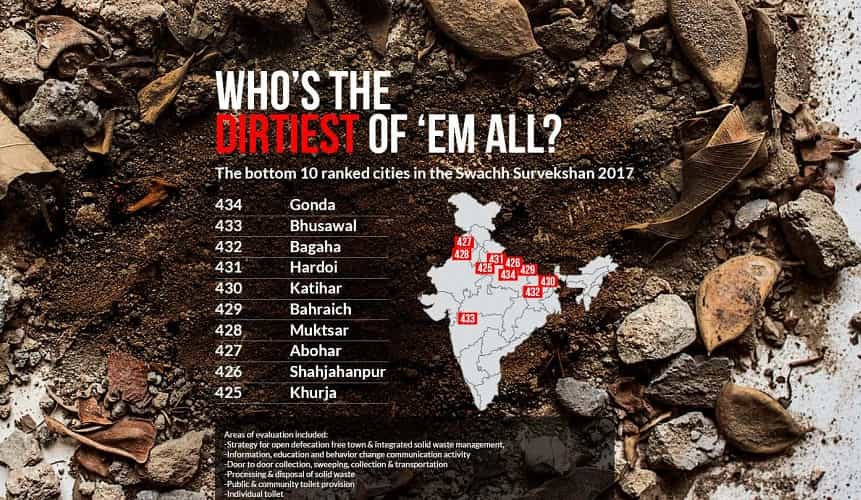 Khurja is a city in Uttar Pradesh and it falls under Bulandshahr district. The place is about 85 kilometers from the national capital and despite of this, it is one of the dirtiest cities in India. The city is also referred to as Ceramics City as a large population in this village produces ceramics. Another name of this city is Khurchan. As per the last census, the population of the city is about 1 lakh and 50 thousand.

Next in our list is Shahjahanpur from Uttar Pradesh. This city was established by Diler Khan and Bahadur Khan. The city is situated at the elevation of two rivers and the name of the rivers is Khannaut and Garra. As per the last census, the population of the city was estimated to be 3.5 Lakhs with a literacy rate of a little less than 70%.

Abohar is a city in Punjab and the city is close to India – Pakistan border. The population of this city is estimated to be 1.5 lakhs and this city has a lot of fertile lands. The fruit of Kinnow is supplied from this place to all over India but unfortunately, the place scores low when it comes to cleanliness.

To our surprise, another city of Punjab is in our list and the name of the city is Muktsar. The city is famous for Sri Muktsar Sahib which is a holy place for Sikhs. The estimated population of this city is 1.2 Lakhs and it is also the 14th largest city in Punjab. The city was formed after Battle of Muktsar was fought in this area and the battle was fought in 1705.

Next on our list is another city from Uttar Pradesh. The city is located on Saryu River and the city shares the international border with Nepal. As per the records, this city is a minority concentrated area and it has a total population of 1.9 Lakhs.

On thefifth number, we have Katihar and the city is located in Bihar. Katihar needs to work a lot to remove the tag of dirtiest city in India and it can be easily achieved as this is one of the well-planned city in India. The city has LED lampposts and several walks over bridges. The total population of this city is an around 2.4 lakhs.

This is the fourth city from Uttar Pradesh to make it in the list of the dirtiest cities. The city has a population of about 2 lakhs and acertain area in this city has dense forest as well as open forest. The city was named after the word ‘Haridrohi’ which basically meant anti-God and the city got this name because one of the rulers of this city didn’t believe in God.

This is the second city from Bihar in our list and the city falls under Pashchim Champaran District of Bihar. The city has a population of about 1.15 Lakhs and the literacy rate of this place is as low as 38%. The people are in this city are being educated about the importance of cleanliness so we hope that the next time, this city doesn’t make it to this list.

Bhusawal falls in Maharashtra and the city was established in 1882. It is also to be noted that the Bhusawal Railway junction is one of the largest railway yards in India. The total population of this city is estimated to be 2 lakhs and the literacy rate is 91%.

Gonda is the dirtiest city in the country and this city is about 125 Kms from Lucknow. The city has a population of 1.2 Lakhs and the literacy rate in the city is 80%. The city has several famous places like Swaminarayan Chhapaiya, Ayodhya and much more.