Gun violence has long been known to affect a majority of the countries in the world. From Puerto Rico to the United States of America, no country is devoid of loss of innocent lives caused due to gun violence. These incidents of violence caused owing to guns and firearms have made the otherwise beautiful world a violent place to live in.In order to control the growing violence caused due to the possession of guns, the countries should have a legal policy in place which can control such a possession. The countries which support the manufacture of guns should also have certain policies in place which can go a long way in dealing with the growing crimes owing to gun violence.

The following is the list of the countries with the highest gun violence in the world. The list is based on the survey and the data as circulated by the Small Arms Survey:

Gun violence has today become very normal in the country of Trinidad and Tobago. People have become very used to hearing about the loss of innocent people’s lives caused owing to gun violence. In recent years, the government of the land has started taking appropriate measures in this direction and the gun violence did see a decline in the recent years. However, in spite of that, the violence is high enough to list Trinidad and Tobago amongst the top 10 countries with the highest gun violence in the world. In the year 2016, 23.7 was the rating given to the country.

Next on the list is the Bahamas. The country has always been known to have a high percentage of domestic violence owing to the firearms and guns held by the citizens. As per the latest data, around 24.8 deaths in the Bahamas for every 100,000 citizens can be owing to gun violence which in itself is huge for a country which otherwise has low population rate.

Research indicates that the country with a small population of around 3.5 million people has a large rate of gun violence. Thanks to the 800,000 guns held by the citizens of this country. In fact, the country of Puerto Rico has time and again ranked the number one country when it came to the highest percentage of homicides caused by firearms and gun weapons. The percentage has been as high as around 94.8 percent.In 2016, every 25.1 deaths out of its 100,000 residents occurred due to gun violence, which contributed to 90% of the total homicides in Puerto Rico.

As per the data from the forensic institute issued for the year 2016, every 26.8 deaths amongst 100,000 of the residents in the country occurs due to gun violence.In an attempt to reduce the domestic violence in the country, Columbia had imposed a ban on carrying guns and other firearms till the end of 2016. Although there was some improvement owing to the ban, the numbers still remain high when you compare it with the other countries of the world.

No doubt, the country of Belize is a beautiful place to visit and has long attracted tourists from different parts of the world. However, this cannot take away the fact that the crime rate in the country has definitely been on the higher side. In 2016, every 29.7 deaths out of the 100,000 residents in the country occurred owing to violence caused by guns.

As per the estimates, around 11.5 percent of the total population of the country have guns that they own both legally as well as illegally. Year on year, the average for the number of deaths caused by firearms and gun violence has somewhere been around 34.1 people per 100,000 residents. In 2016 alone, the number of deaths owing to gun violence was reported to be 29.9 per 100,000 of the total population. The government has recently taken steps to reduce the crime rate caused by gun violence by imposing strict laws with respect to owing of firearms and guns.

Most of the domestic crimes in the country of El Salvador is owing to the high levels of rising gun violence. In fact, the most popular targets of the rising violence have unfortunately been the women and children. In 2016, 48.8 deaths out of 100,000 residents in the country were known to be caused owing to gun violence. In fact, this rate has been maintained over the years as well. It has one of the highest rates of murders and crimes in the world. As per the El Salvador police chief, around three to four gun battles are reported each day in an attempt to reduce the crime rates.

Amongst the top countries which have recorded the highest number of gun violence in the world, the country of Venezuela ranks second. Reportedly, around 10.7 percent of the total population of the country owns guns and firearm weapons. Within the country, the capital city of Caracas is known to be the most dangerous city. Over the years, the city has recorded nearly 52 deaths out of 100,000 residents in the country. 90 percent of the homicide cases in the city comes from the gun violence itself. The steps taken by the government of the country to control the ownership of guns by its citizens have done little to mitigate the problem of gun violence in the region. 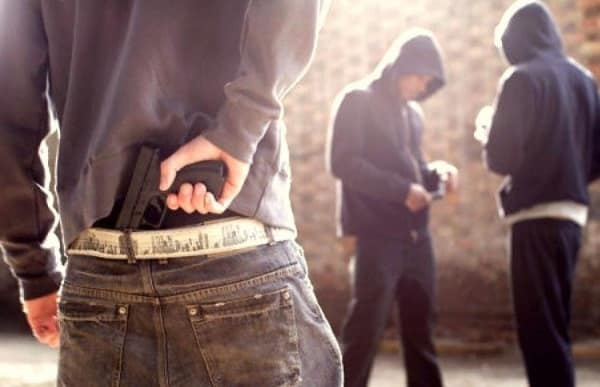 The country with the highest rate of gun violence is definitely Honduras. On an annual basis, around 67.18 deaths out of 100,000 residents of the country occurred as a result of gun-related violence. Although a small country, the number of crimes that can be attributed to gun violence is huge indeed. The most dangerous city in the country happens to be San Pedro Sula. Most of the crimes related to firearms can be attributed to the history of Honduras when there was no regulation with respect to the citizens owning firearms and weapons. It was in the year 2007 that a low controlling the ownership of guns by the citizens came into being. However, the crime rate is still high making Honduras the most dangerous city as far as the gun violence is concerned.

Apart from the countries listed above, there are other countries such as the United States, Mexico, Swaziland, Uruguay, etc. which have over the years recorded a high rate of crime owing to gun violence. Recent governments have started to recognize the threats caused by the owning of arms and appropriate steps are being taken towards that direction.