In this article, we shall discuss the top 10 countries with most submarines in the world:

With a total of about 11 submarines, Columbia is tenth on the list of countries which have the highest number of submarines in the world. The strength of its submarines makes the navy of the country really strong. Most of the submarines in the land belong to types 209/1200, SX-506, or even that of the tactical chariot. The fleet of active submarines in Columbia makes it one of the most powerful South American countries.

Turkey has a total of about 12 submarines at present. The submarines of this country all belong to the type 209 variety and each one is diesel-electric based in nature. This is the type which is greatly popular as this submarine can be easily customized to suit the needs of different nations. In fact, Turkey is the only nation after Germany itself which has the highest number of German submarines in the world. Most recently, the navy of this country is planning to also take up another German submarine. This is of a much superior variety and is known by the name of type 214.

With a total of about 15 submarines in its navy, the country of South Korea ties with India as far as the total number of submarines is concerned. The South Korean navy has a combination of both type 209 and types 214 variety of submarines. Most of the submarines that the country has,belong to the diesel-electric type. Most recently, the navy of this country has showcased its desire to build the type 214 at its homeland instead of importing it from Germany. In 2017, the attacks of North Korea against South Korea increased significantly. As an answer to the same, the Navy has developed a 65-meter long submarine which is believed to be able to stay underwater for as many as 10 continuous days.

The 17 submarines that Japan has gives the country a sixth spot on the list of the top 10 countries which have the highest number of submarines in the world. Most of the submarines are of the diesel-electric variety and amongst the most modern variety of submarines that the country has, the Soryu-class is the most advanced.The name roughly translates into Blue dragon and most of the submarines in Japan are named after the name of the ocean currents. Countries like India and Taiwan have time and again approached Japan with an intention of importing the Soryu class submarine. These are made with a very high budget with each submarine cost running into millions and billions of dollars.

With 33 submarines, Iran is next on the list of the top 10 countries with the highest number of submarines in the world. The navy of this country has long been known to invest large sums of money for the construction of submarines with the best-in-class techniques. The navy has a combination of diesel-electric class submarine along with the Ghadir class submarines which have been specifically designed to stay within the waters of the Persian Gulf. These have been known to be derived from the techniques used by North Korea for the construction of its own submarines. In order to fight its constant battles, Iran is indigenously producing a few submarines with the best available modern techniques.

After Iran, it is Russia on this list with a total of a whopping 63 submarines supporting its navy. The country is known to have a combination of the diesel-electric submarine as well as nuclear submarines, ballistic missile submarines, attack submarines, and special-purpose submarines. The country is constantly in a process of adopting the most modern technologies while building its submarines and the efforts of the country are reaping fruits as well. In the early months of this year, Russia launched its most powerful nuclear submarine which belongs to the Yasen class and has been named as the Kazan. It is a powerful weapon for the Navy capable of reaching speeds as high as 31 knots.

The navy of China has invested a huge amount of money as well as time to expand its total military and navy. As such, the number of submarines has also gone up in the region and today the People’s Liberation Army has as many as 68 submarines. The most populous country in the world has a combination of different types of submarines including nuclear power submarines, ballistic missile submarines, amongst a host of others. Most recently, the country has launched its new nuclear-powered submarine. It is speculated that this submarine is either of type 094 or type 093. 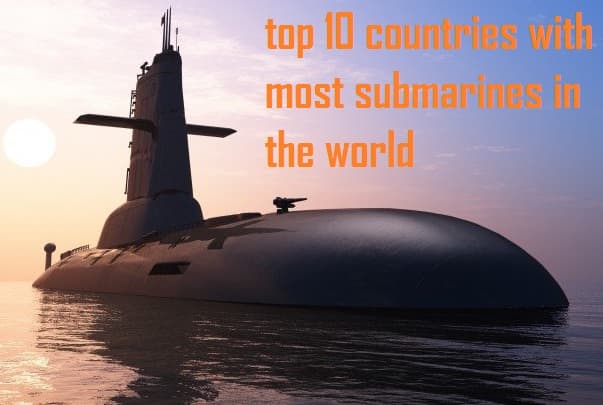 The above are pretty much the top 10 countries which boast of having the most number of submarines in the world!