Cricket has long been associated with being a man’s game. When you talk of cricket, all the names that come to your mind are that of Sachin Tendulkar, Vivian Richards, Brett Lee, Virat Kohli, Saurav Ganguly, amongst others. Surely, they have contributed a lot to the game of cricket and thanks to their caliber cricket is such a widely loved game all across the globe. However, very few people know that there exists a women cricket team as well for different countries. Although few, people and the lovers of the sport are coming around to love and watch the women play cricket as well. Women’s cricket is gradually gaining popularity and viewership all over the world. Keeping this in mind, let us today explore the top 10 best women cricketers in the world currently.

The current captain of the West Indies cricket team is known for both her batting as well as her off break bowling action. Born in Jamaica, Taylor made her debut in the world of cricket in the year 2008 and has since then, represented her country in over 80 international games. Her most significant accolade till date has been in the year 2011 when she was declared the “ICC Women’s Cricketer of the Year.” She was the first West Indian to receive the honor. The young Stafanie was named the player of the series in the 2016 Twenty20 world cup.

Read Also: Top 10 Most Beautiful Women Cricketers In The World

Ninth-best women cricketer in the world as per the ICC rankings is the young South African cricketer Lizelle Lee. She made her debut in cricket in the year 2013 and is known for her powerful batting. The young and budding woman cricketer has a rating of 625 in the ICC player ratings under the category of one-day International batting.

The ability of the woman as a cricketer can only be guessed with the fact that she landed up winning the women’s cricketer of the year award both in the years 2006 and 2010. She is mainly known for her aggressive bowling action. The 32-year-old was also a part of the winning team when England took home the 2017 Women’s Cricket World Cup trophy.

The Bengali Indian cricketer is known for her batting as well as bowling. She has a true all-rounder capability. Her bowling average in the test matches has been less than 20. In 2007, the cricketer was awarded the ICC Women’s Player of the Year award. Currently, she has been placed in the second rank in the ICC rankings for the women players in the one-day international games for bowling. With a total score of 652, She is just four points below the first rank holder.

Currently number one in the ICC rankings of the women cricket in the bowling department, M. Kapp is sure amongst the best women players in the world as far as cricket is concerned. The South African player has already appeared in 85 one-day international matches and about 50 twenty20 matches. At 27-year-old, she is one of the most sought-after all-rounders in the South African women’s team. She holds the record of scoring the highest number of runs in a women’s world cup match by a South African. She did this against Pakistan in the year 2013 where she was not out after scoring 102 runs.

The women cricketer is an all-rounder not only in the field of cricket, but the Australia also plays football. In fact, the young athlete is often seen juggling between the two sports. She was 16 years of age when she made her debut in the Australian cricket team, making her the youngest player in Australia to play in an international match for the country. Her average in test cricket stands at 31.28 and is around 38.66 in international matches. The young star is a genuine all-rounder in the true sense of the word.

Fourth on the list of the best women cricketers in the world is England’s Anya Shrubsole. The cricketer has been a part of the women’s cricket team of England since the year 2008 and is mostly known for her right arm medium pace bowling action. In the Twenty20 cricket world cup held in the year 2014, Anya was the highest wicket-taker which made her the “Player of the Series.” She is also known for her right-handed batting in the lower order of the game. The England women cricket team relies heavily on Anya Shrubsole both in the one-day international games as well as the twenty20 cricket matches.

Next on the list is India’s heartthrob cricketer as far as the Indian women’s cricket is concerned, Mithali Raj. The 32-year-old has won the hearts of millions of cricket fans all across the globe owing to her sheer batting talent.The current captain of the Indian women cricket team made her debut in the year 1999. However, she really started getting noticed in a couple of years after that, when in the year 2002, Mithali Raj scored a whopping 214 against England in a test match. The Indian cricket team relies heavily on this woman who has never failed to impress the selectors and the cricket fans across the world.

This young cricketer is both a wicket keeper as well as a batsman of the England cricket team. She has made a record of being the youngest woman cricketer to have scored 1000 runs in her career. Starting in the year 2006, Sarah Taylor has already scored 5 hundred and 16 fifties till date already. The young Sarah has also played against the men owing to her powerful batting performance and caliber. 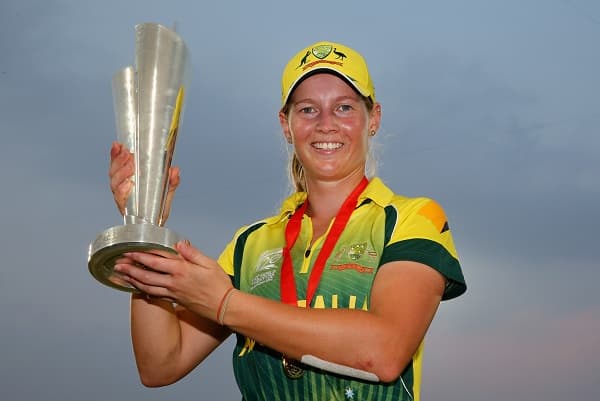 Number one on the list of the best women cricketer in the world today sure has to go to Meghann Moira Lanning from Australia. She is the best Australian bats woman currently and hold the record of being the nation’s youngest player to hit a century. She did this when she was just 18 years and 288 days old. So far in her career, she has hit a total of 6 centuries in the one-day international matches. Not only that, the skipper of the Australian cricket team has shown some splendid batting performances in the twenty20 format of the game. The entire Australian team relies heavily on their opening bats woman and rightly so. Just 23 years old, Meg Lanning has a long way to go in her career.

The women cricket team is slowly gaining much popularity and significance as the men’s cricket. Thanks to the above-mentioned phenomenal cricketers. Apart from the top 10, there are others too who make their nation’s proud by representing and playing well in the women’s cricket team.