When it comes to local and tourist attractions, the beautiful country of India can never be run out of options for sure. This country is bombarded with numerous breathtaking natural sights, and even man-made ones. It is even rich in historical landmarks and infrastructures, which were built long time ago. One of these is the Qutub Minar, Delhi. In relation to this, here are 10 interesting facts about Qutub Minar, Delhi that you should know:

10. Red, as well as, buff sandstone is the main material used in constructing the famous and historic Qutub Minar

his particular material is sturdy enough, which is why it is still standing nowadays after so many years from its construction completion. When you step inside this significant structure in India, you can be able to see intricate carvings on its walls, as well as Holy verses taken from the Holy book of Koran.

9. Unlike the numerous tall infrastructures that can be seen in the entire world, Qutub Minar is not standing vertically

It is a little bit slanting in position, but this is actually not its original position. It started to be standing on that way after it encountered a number of destructions and renovations due to natural calamities and maybe, wars. 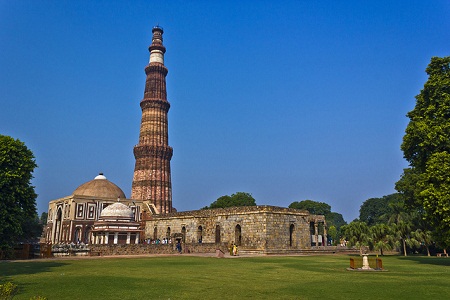 What happened in this particular date was that 45 people were killed because there was a horrible stampede occurred due to the electricity failure in the structure that caused a total darkness on the stairs. Most of the victims were school children.

7. This historic Indian tower used to have 379 stairs

This is why it is not that easy to climb towards the top part of this building. People in the past who didn’t have enough stamina in climbing higher places through stairs never dared to go towards the top of Qutub Minar.

6. One major destruction happened with the Qutub Minar was during the reign of Firoz Shah Tughlaq

A horrible natural disaster happened at that time that really shook the entire humanity in India. A rampaging lighting struck into the structure, which majorly damaged the 2 top floors of Qutub Minar. However, Firoz Shah was very concerned about its condition that he did his best just to repair it.

5. In the year 1505, another major destruction was experienced by this historic place

It was all because of the earthquake experienced within the entire India, which was on its high intensity level. Even so, another good Samaritan voluntarily did something to repair it. He was none other than the Sultan of Delhi, Sikander Lodi.

4. Within the entire world, nothing can beat Qutub Minar as the tallest brick minaret

This is something that Indians are very proud of until these days. This is actually the reason why the government of India is preserving it as a world historical site.

3. There were still no enough evidences to whom Qutub Minar was named of

Some historians believe that the inspiration of constructing it was Sufi Saint. Nevertheless, there are some other historians who strongly believe that Qutbu l-Din Aibak was the person behind this breathtaking historic building.

Its height is exactly 72.5 meters. Its base has a diameter of 14.32 meters, while its top part has 2.75 diameter measurements.

1. The whole structures of Qutub Minar were actually not completed in closer time frames, from the base floor up to the top part

It was during the Aibak’s reign when its first storey was completed. The next floors were completed under the leadership of Shamsu’d-Din Iltutmish. Firoz Shah Tughlaq was the one who completed the 5th and the last floor of this building.

These are the top 10 interesting facts about Qutub Minar, Delhi. Without a doubt, this structure is something that Indian people should be very proud of.