The list of Top 10 facts about Presidential House of India will surely blow your mind. 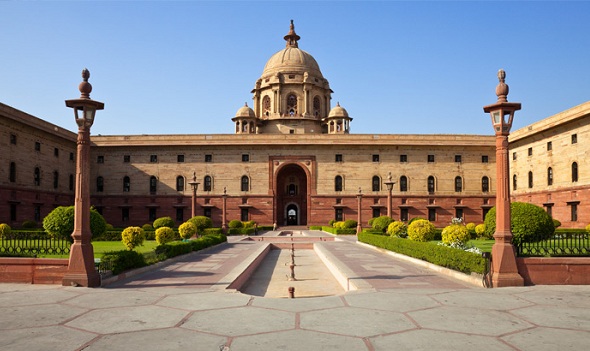 Not only celebrated place about gallery and historical amusement, the Presidential House of India has Children’s Gallery, the Presidents of India since Independence has a great influence over children and children had also shown great love for Presidents over a period of time. The Gallery is portrayed as museum of children’s love for President and also President’s love for the future of India. The Gallery is divided into two parts, ‘By The Children’ is the first category that showcased sketch, paintings and greetings of children all over India ; the second part is ‘For The Children’ carries items that interest children as musical instruments, optical illusions.

Every Saturday the ceremony called ‘Change of Guard’ is initiated at sharp 10 am, Presiden Pranab Mukherjee suggestion to made it more public friendly and displayed to common people of India now allows Public to witness the pride ceremony. The only need to take part in the ceremony is to take along your Photo Identity Card, the entry for same is allowed at Gate no.2 of Rashtrapati Bhawan.

The Ashoka Hall of Rashtrapati Bhawan is one of the stunningly beautiful Hall, the British Government and Officials after its construction used the hall as Ball Room for Dancing and other celebration. The Presidential Hall now is used to conduct presentation of credentials, swearing ceremony of ministers and other important official ceremonies. The stunning hall has beautiful paintings and oil-on-canvas and frescoes combination.

Reading all information about Paradise like mansion for the India’s top authority, the common question hits all-‘how the food is prepared’. The Kitchen museum is an exhibition with fascinating collection of lavish crockery, large utensils and copper ladles. The Museum exhibit Kitchen equipments since 1911.

It will be not a wrong statement to call Rashtrapati Bhawan a city on its own with all important facilities, The Banquet Hall Presidential House has installed can accommodate over 100 guests at a time and ceremonies to honor foreign delegation is carried out in these halls. The fascinating feature of this Hall includes secret galleries for musicians and stunning lighting system.

It’s impossible to talk about Rashtrapati Bhawan without mentioning Mughal Garden. The Mughal Garden is the most beautiful body of Rashtrapati Bhawan, blooms with large variety flowers in springs. The Garden bestows each and every species of roses from all over world, the circular garden with blooming different flowers and different colours will surely be a treat for your eyes.

After knowing details about different rooms and galleries the most eager question in mind is the exact no. of rooms Rashtrapati Bhawan. It will surprise you that for only one person accommodation, there are approximately 300 rooms in Rashtrapati Bhawan, including Guests and Staff Rooms.

3. The Statue of Gautam Buddha

The priceless sculpture of Gautam Buddha from the Gupta Age also called the Golden Historical India’s period is installed at the backside of Durbar Hall. The statue of Buddha is placed at the height of India Gate. The significance of

The Durbar Hall is architected in a manner that if you follow the straight line from Durbar Hall you will reach Delhi’s monumental site India Gate. The Grand Durbar Hall is the tomb of Rashtrapati Bhawan visible from miles away. Stunning lighting all over the Durbar Hall during festive season will surely skip your heart.

By now you know that Rashtrapati Bhawan is combination of many historical halls that magnifies its grandeur to many folds, the hall that tops the list for its beauty and majestic display is the Marble Hall. The Hall serves as the museum of British Royalty as it displays rare and mesmerizing sculptures of Viceroys. The most valuable feature of the Hall is wax statue of all Presidents served for India since its Independence, it also showcase Shri Pranab Mukherjee’ statue the present President of India.Theses wax staue are designed by Asansol based Artist.