India is the land of religious and cultural attractions, with the southern part of the country being home to some of the most famous temples in the world. One of these attractions is the renowned Meenakshi Temple in Madurai, Tamil Nadu. The temple is grand in terms of architecture and ancient in terms of history, which makes it one of the most visited places in this part of the country. There are some other thrilling facts about this beautiful temple too, which add to its attraction.

Here is a list of 10 interesting facts about Meenakshi Temple: 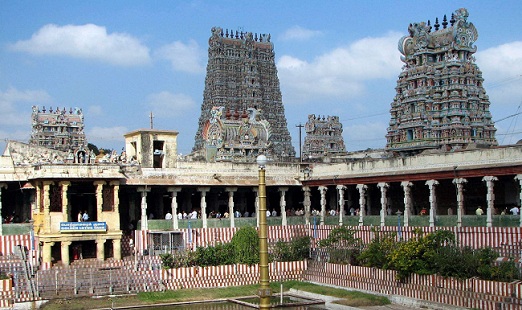 10. Nominated for a place amongst New Seven Wonders of the World

Meenakshi Temple is amongst the 30 attractions around the world which have been nominated to the list of New Seven Wonders of the World. it is now poised to become a historical pride for India just like the Taj Mahal.

This historical attraction happens to be one of the biggest attractions for people from far and wide, within the country and abroad too. On an average, nearly 15000 tourists and pilgrims make it to the temple daily, with the number increasing to 25000 on Fridays. The annual revenue of the temple has been a tumultuous Rs 60 million.

Meenakshi Temple hosts the famous Meenakshi Tirukalyanam Festival in the months of April and May every year. This grand event lasts for 10 days and has as many as a million people visiting the temple during it.

Meenakshi Temple has a pond called Golden Lotus Pond, or Porthamarai Kulam, in its premises. The most unusual thing about this pond is that the lotus flowers which grow in it are golden in color.

The temple is subjected to periodic restoration, which is carried out as a ritual every 12 years. At this time, the sculptures of deities featured on the tower are reprinted and repaired, to ensure the glory and splendor of the temple.

The presence of an estimated 33000 sculptures in the temple is an interesting thing about it. Meenakshi Temple houses the towering sculpture of the Nataraja, which is enclosed in a massive altar made of silver. The temple has a large number of pillars in the Hall of Thousand Pillars and each of these pillars features a carved sculpture.

4. One of the largest temple complex in South India

This spectacular piece of architecture is the amongst the largest temple complexes in this part of the country as well as one of the largest in the state of Tamil Nadu. Another distinctive feature of Meenakshi Temple is that it has four main entrances, each of them facing the four cardinal directions.

Another amazing fact about the famous Meenakshi Temple is that it is dedicated to the fish-eyed goddess called Meenakshi Amman. Fish-eyes, according to classical Tamil poetry, implied perfect looking eyes. Unlike most of the South Indian temples which are dedicated to Lord Shiva, this one has a female goddess as the female deity.

The majestic temple is built in the architectural style called the Dravidian Vijayanagar South Indian architecture. It was designed by Vishwanatha Nayak and is so old that it finds mention in the ancient scriptures of Tamil literature. The temple has 12 towers or gopurams, which are adorned with beautiful paintings and sculptures.

1. History of the temple 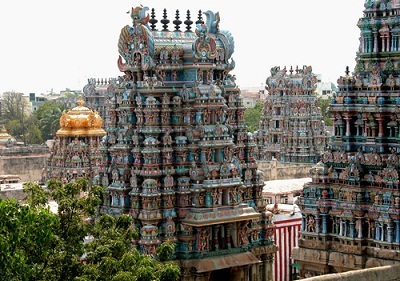 Meenakshi Temple has a glorious history which dates back to 1560, when it was built during the period of Tirumalai Nayak, a time when the city of Madurai was the capital of Pandyan Empire. In fact, the temple which is considered to be almost 2500 year old, is regarded as the heart of the city of Madurai.

Make sure that you visit this glorious temple and get an experience of a lifetime.