The supreme legislative body in India is the Parliament. The president and the two houses, namely the Lok Sabha (House of the people) and the Rajya Sabha (Council of states) are the constituents of the parliament. Both the Houses enjoy certain rights in common, but they differ in certain aspects too. Let us consider the differences.

How members are elected?

Eligible voters elect the members of the Lok Sabha. Eligible voter means a person who can cast a vote in a direct election, according to the universal adult franchise. Persons who are above 18 years old are eligible to vote and elect the member to the Lok Sabha. 25 years is the minimum age required to become a member of the Lok Sabha. A person should be a citizen of India to stand for the elections. In the Rajya Sabha members are elected by the members  who have been elected by the people to the Legislative assembly of each state by means of proportional representation which is based on the population of the state.

Who is eligible to become a member of the houses? 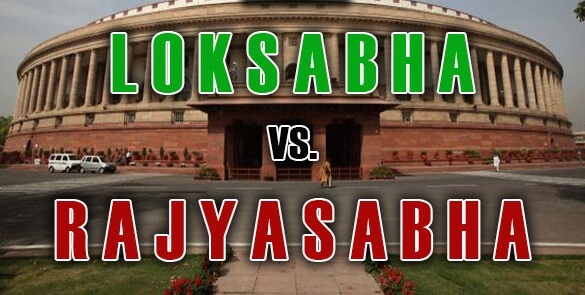 Who heads the Houses

The Speaker is the head of the Lok Sabha, he presides over the sittings of the Lok Sabha. The Rajya Sabha proceedings are presided over  by the Vice president of India.There is also a Leader of function in the Rajya Sabha, who is usually a cabinet minister. It could be the Prime minister if he is the member of the house or any other minister could be nominated. There is also a Leader of the opposition who leads the minority parties.

Term of the Houses

The term for Lok Sabha is 5 years. The president of India has the right to dissolve the Lok Sabha at the end of every five years or even before. Rajya Sabha is somewhat permanent in nature and cannot be dissolved. But the term period for the member of Rajya Sabha is limited to six years.

Number of members of the Houses.

Lok Sabha can have a maximum of 552 members, out of which 530 members are elected through election from various constituencies in the state and the other 20 members are from the union territories. The president has the right to appoint a maximum of 2 members from the Anglo Indian community. While the number of members in the Rajya Sabha is restricted to 250, out of which 238 of them are elected by the MLAs and 12 of them are nominated by the President based on nominations. Nominations to become a member of the Rajya Sabha are made based on the expertise of the person who is being nominated, in the fields of art, literature, science and even sports. The states are given equal representation in the Rajya Sabha, however, the number of representatives for each state depends on the population of the state.

The Lok Sabha can be dissolved by the President of India at the end of every five year term or even before. The President is also endowed with powers to dissolve the Lok Sabha during the state of emergency or if the house fails to prove its majority. The Rajya Sabha cannot be dissolved in any situation. Only the members change when they have completed their term of six years.

The Lok Sabha has the power to call for the general election by passing a no confidence motion in the Lok Sabha against the current government, whereas, Rajya Sabha cannot be dissolved even when Lok Sabha is dissolved.

Rajya Sabha  is bestowed with special powers to declare laws and create by law regarding matters listed on the state laws. Lok Sabha cannot do it.

Debate in the Houses

A person initiates discussion on a topic, after which other members speak and express their views, however the speaker calls upon the members to participate in the discussion in order. Only one person is supposed to speak at a time and he is supposed to address the Chair headed by the speaker or the Deputy speaker. Rajya Sabha has the right to discuss matters pertaining to the protection of the rights of states against that of the union only and can only make suggestions for change in money bills.