Despite strong efforts, child labour is still a concern in some countries. There are still many countries in the world that forces children to work for income. Most of the countries use children as soldiers to fight in conflict regions, most of them are also sexually exploited for commercial gains too.

Here is a list prepared by the international consulting firm Maplecroft; the countries that still use child labour the most.

Burundi is an East African country with 68% of population living in extreme poverty. This is one of the main reasons why the child labour here is worse. Studies indicate that almost 1 in every 5 children engages in a child labour of some kind irrespective of their age and sex. One of the notable things about this country is that the government offers free education to the citizens but, only 71% of the children utilize it, however, this is limited to just some sort of formal education only. Another reason for the worse child labour conditions is as a result of frequent conflicts and other violent internal issues that force children to participate as soldiers or get detained to prison. These conflicts also leave many children’s as orphans and which in turn makes them work for their daily bread.

A report prepared by the United States Department of labour indicates that there are about 836 thousand children between the age of 5 and 15 in Yemen are engaged in some sort of child labour. The study further indicate that 70% of these children’s work in an agricultural sector and the remaining percentage in activities like begging, working in hotels, mining industries etc. Like Burundi children here are also used as soldiers in conflicts and wars, and a notable fraction of female children’s are a victim of sexual exploitation and human trafficking.

Zimbabwe is one the countries with the highest child labour index. It is estimated that 95% of the total child labour here are engaged in agricultural activities, industrial work, mining etc. The agricultural work in Zimbabwe is a brutal method of making children work for prolonged hours in the sun, tea, cotton, and sugarcane plantations uses the most child labour here. Studies have indicated that one of the key reasons for such mass child labour is because; most of the parents do not have the basic idea of obtaining/acquiring a birth certificate for their child this in turn does not make the children fir for getting education or appear for an exam. Under such circumstances children’s are voluntarily forced to work for their survival.

Despite millions of aid provided by the United States of America for several developmental processes in Pakistan, the United States Department of Labour has reported that 13% of total population children which accounts for almost 2,449,480 children between the ages of 9-15 are engaged in some sort of child labour. Out of which 76% work in agricultural sector which includes reaping and harvesting of crops. The remaining percentage of children’s work at hotels, teal stalls etc. The studies also indicated that children’s are also used in coal mining and bangle industries. One of the main reasons for child labour in Pakistan is because of poverty.

Afghanistan is one of the countries where a good percentage of the countries working force are child labour. Reports indicate that majority of the child labour is used in the form of workers in brick industries and as soldiers in armed conflicts. According to the United States labour department reports child labour in this country is also used in agriculture, mining and other sorts of work. Child trafficking in this country is also a notable factor; the country also has people who use male boys for sexual entertainment. 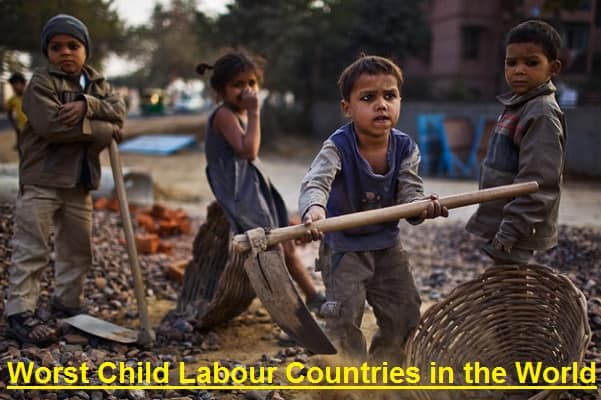 Studies indicate that Eritrea has the largest number of child labour in the world. The government in the country forces children at the grades of 9 to 11 to work in agricultural sector or any other public service. The children’s are also forced to undergo military training programs. One of the notable things about this country is that, despite there are strong laws that forbids using child labour, the government itself uses child labour. Sexual exploitation of children for economic gain is also very common in this country.

All the data’s mentioned below each country were obtained from several websites and the ranking was done on the basis of the list from “Maplecroft”. Hope this article helped you.