Dinesh Lal Yadav is one of the most popular and successful actors in the Bhojpuri film industry at present. Born in Ghazipur, Uttar Pradesh on 2nd February, 1979, Dinesh is also a singer, producer and television presenter. He is nicknamed as “Nihuaa” and his popularity can be judged from the fact that he was invited to participate in the season 6 of the acclaimed reality show “Big Boss”. In his short career, which started in 2007, Dinesh Lal Yadav has tasted great success.

Here is a list of top 10 best movies of Dinesh Lal Yadav:

Dinesh Lal Yadav made a dream debut with a movie called “Nirahua Rikshawala” in 2008, in which he played the title role of Nirahua and soon became popular by this name. He made a hit lead pair with Pakhi Hegde with this movie and went on to give several hits with her.

“Pratigya”, another acclaimed movie of Dinesh Lal Yadav came in 2009, in which he played the character of Prem. The film starred Pawan Singh, Pakhi and Sonali Joshi, along with Yadav.

Next on the list of best movies of Dinesh Lal Yadav comes a movie called “Adaalat”, which released in 2014 and had the hot Bhojpuri diva Monalisa playing the female lead. Yadav received quite a great deal of appreciation for the movie.

Another movie in the Nirahua series came in 2011, which was named “Nirahua Chale Sasural”. Yadav was supported by Pakhi Hegde yet again in this movie.

Yadav was acclaimed for his 2012 film called “Aakhiri Raasta”, in which he played the role of Deva. He was highly acclaimed for this role and it proved to be one of the milestones of his career.

Another one among the best movies of Dinesh Singh Yadav is “Vidhata”, a 2008 hit movie in which he featured along with Bhojpuri super star Ravi Kishan. Yadav played a character called Kishan in the movie.

Deewana, a 2011 release is another block buster hit of Dinesh Lal Yadav, in which he was paired yet again with Pakhi Hegde and featured as Nirahua once again. Pradeep Pande Chintu played an important role in this movie.

Featuring next in the list of top 10 best movies of Dinesh Lal Yadav is “Parivar”, which came early in his career in 2008. The movie starred hit actors like Pravesh Lal Yadav, Pakhi Hegde, Pankaj Keshri and Urvashi Chaudhry. It had Dinesh in the role of Nirahua.

2012 was a big year for Dinesh Lal Yadav, as he got some big breaks in this year. In this year came one his best movies called “Ganga Jamuna Saraswati”, in which he co-starred with Bhojpuri super stars Manoj Tiwari and Ravi Kishan. Others in the star cast of the film were Pakhi Hegde, Rani Chatterjee, Rinku Ghosh and Awadesh Mishra.

Dinesh Lal Yadav got a greatr opportunity in 2012, when he was cast in a film with the Bollywood legend, Amitabh Bachchan and Jaya Bachchan in a Bhojpuri film called “Ganga Devi”. The female lead in this movie was played by ace actress Pakhi Hegde”. 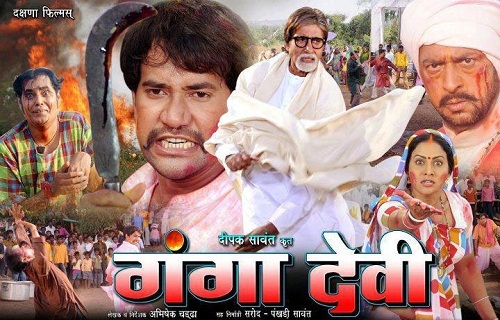