Rivers have been aiding to the sustenance of life since time immemorial. Even the paramount and important civilizations of the globe have been confirming to this fact. Rivers are of utmost importance to humans and animals alike. They are required for easy carriage of goods from a place to another, are a vital source of drinking water and water for farming and business purposes is also taken from rivers. Rivers are home for many water animals like mammals, fishes, reptiles and various invertebrates that are found in the waters. They are essentially important in power generation, irrigation, navigation, shipment purposes, etc.

Talking about rivers in Asia, there are plenty of them.Asia is a house for a number of countries with beautiful landscapes, high mountains and tropical places, therefore there are a number of rivers which originate from rain waters, icy mountains and streams. These rivers, mainly from India, China and Russia, merge into bigger rivers or oceans.

There are a number of longest rivers in Asian Sub-Continent, the length is however listed in approximate figures.

At number 10, we have India’s Brahmaputra River. It originates from Angsi Glacier, located on the north edge of the mighty Himalayas. In Tibet it is known as the Yarlung Tsangpo River. It flows across southern part of the Himalayas to breakthrough in great valleys and gorges. It runs in the southwest direction and all the way through India, China and Bangladesh. Its length is about 2,900 km. This river is an important source of transportation and irrigation and when the ice melts, it is prone to disastrous floods.

Tunguska River is positioned in Siberia, Russia and runs across the Irkutsk Oblast and the Krasnoyarsk Krai. Nizhnyaya Tunguska connects Yenisei to Turukhansk as it is the right branch of the former. This amazing river stretches up to 1,857 miles or 2,989 km in length. This river had been very important for the trade and transportation. It has been a very profitable river as it was a means for fur trade and conveyance of minerals and expensive goods. Tungsuka River ranks as 8th Largest River of Asia.

Indus River is another south flowing river of Asia. It derives its name from Modern India but it is the national river of Pakistan. It is also known as Sindhu. Indus is very important for Pakistan and India. Punjab’s five rivers, Ravi, Jhelum, Chenab, Satluj and Beas, all are the tributaries of Indus. Other rivers which form its tributaries are Gilgit, Gomal, Kabul and Shyok. Indus is one of the vital water resource for Pakistan. It also flows through Pakistan, Western Tibet and India. In Asia it ranks at number 9 in terms of length which is 2900 km.

The 7th largest River of Asian Sub continent is Ob River. It is also known as seventh longest river of the world. It is very important for Siberia, Russia. The river is used majorly for fishing, irrigation, and for generating hydroelectric energy. The length of Ob River is about 2268 Miles or 3,650 km. The Gulf of Ob is known as the world’s longest creek.

6th Largest River of Asia is Yenisei River. Being 2,540 miles or 4,090 km – long, Yenisei is the major river flowing into the Arctic Ocean. It is the central of the three greatly enormous Siberian Rivers (Enisei Yenisei, Jenisej) that flows into the Arctic Ocean. The river flows across City of Krasnoyarsk and Tuva. Furthermore, the maximum deepness of the Yenisei reaches 24 meters. This river is a home to exotic species of fish and other mammals. The trees found on the banks of these rivers are Siberian Larch and Pine.

Irtysh is another Siberian River and is one of the main tributaries of the Ob River. Its length is about 4250 km or 2640 Miles. It flows through Mongolia, Russia, China and Kazakhstan. This river is of a great economic importance to Russia and Kazakhstan as the tankers, freight boats and passengers easily navigate through this river during the months of April to October. 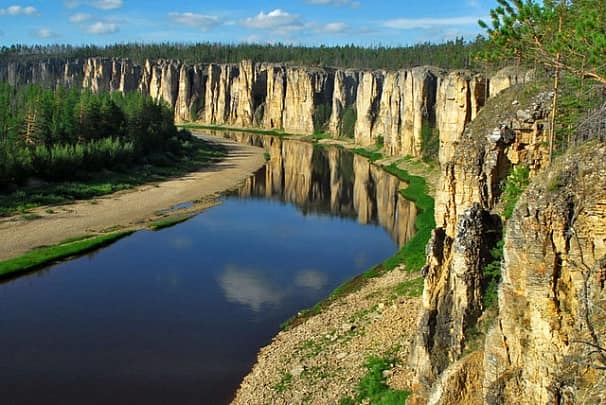 4th largest river of Asia is also the 11th longest river of the world. The approximate length of this Russian river is over 4400 Kms or 2734 Miles. It is one of the 3 Siberian Rivers that flow into the Arctic apart from Yenisei and Ob. It is one of the prominent and biggest river whose drainage is totally in the interior of the Russian borders. Lena River is very important for the trade and has been in use since 1620 when a group of Russian Fur Hunters discovered this river.

Mekong is a trans-boundary river flowing in the south-eastern part of Asia. It covers the length of about 3,050 miles (or 4,909 km). Mekong provides trade route between Southeast Asia and Western China but it is known for its seasonal variations, waterfalls and rapids which make navigation very difficult. The Mekong is home to the finest flora and fauna of our biodiversity. Number of large and exotic species of fish are found in this river.

2nd Largest River of Asia. Yellow flows into the Bohai Sea making its way through 9 provinces. Its tributaries are Fen River, Wei River and Tao River along with some smaller rivers. It is also known as Huang He and is considered as one of the major rivers that are essential for China’s survival. The length of this river is about 3395 Miles (or 5464 Kms). It is called Yellow because it is the color of mud found in the lower passage of river. This huge amount of mud is known as Loess Sediment which gets formed due to collection of silt which is blown by wind. Several catastrophic and fatal floods happened because of this river in the past and more than one million people got killed.

Yangtze is the longest river in Asia and the third longest river of the world. For a long time now, Yangtze has been a major component of China’s water transportation structure and it still holds its significance for China. It is financially also very important for China. It has a great historical significance. Yangtze flows within China only and then pours into the East China Sea. It is known as a home for many endangered species like Finless Porpoise, Chinese Alligator, Yangtze Sturgeon and Yangtze River Dolphin.

Rivers are always important for the sustenance of life on earth. They also provide a brilliant abode and food source for all organisms present. In olden days most of these were used as transportation modes and even now in some parts of world Rivers provide a major transportation system.All the rivers mentioned above provide for irrigation and hydroelectric power and thus should be preserved at all costs.