The place is famous for the numerous beaches, memorials and temples. It is the land of the green meadows, blue water falls, and white sands that all represents majestic beauty of nature. 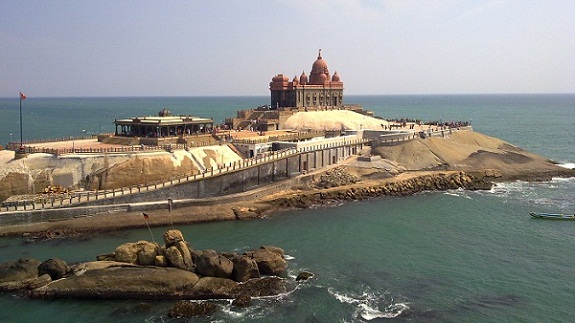 Below are mentioned some of the interesting facts about Kanyakumari.

Marunthuvazh Malaiis the place near the highway towards the Nagercoil and it is about 7 km from the Kanyakumari. It is said that the lifesaving herb that have numerous medicinal values was dropped by the Lord Hanuman there. That is why it is of great importance for Hindus.

The rock Vivekananda is located in the Kanyakumari that is considered a wonder in India. The rock is situated in the middle where the three oceans meet. These three oceans are the Bay of Bengal, Indian Ocean and the Arabian Sea.

5. The Cost of Rock Memorial

The Vivekananda rock was built in the year of 1970 and the building cost of this rock reached almost 1 crore and 35 Lacs.

6. No places to shop

Kanyakumari is the place in India which offers no big stores to shop. However, many street markets are present in the district that can conserve the shopaholics of the Kanyakumari.

Kanyakumari is the best place to buy the handicraft items from. There are numerous shops of handicrafts on the streets that can offer the cheap and reasonable items of handicrafts. The Tamil Nadu Co-Optex Sales Emporium and Poompuhar are the most popular among them.

A memorial built in the honor of the Mahatma Gandhi is also located in the Kanyakumari. The pots of the ashes of the remains of Mahatma Gandhi are preserved at this memorial.

The statue of the great philosopher and poet of the South India is also embellished in Kanyakumari that looks beautiful with the background of blue water. The people worship this statue in the evening.

The district of Kanyakumari was the backbone of the trade and commerce at ancient times. It was also a center for art and religion in the past.