Hina Khan is a well-known Indian actress. She gained a lot of fame because of her role in Yeh Rishta Kya Kehlata Hai. She is known to be one of the highest paid small screen actresses. 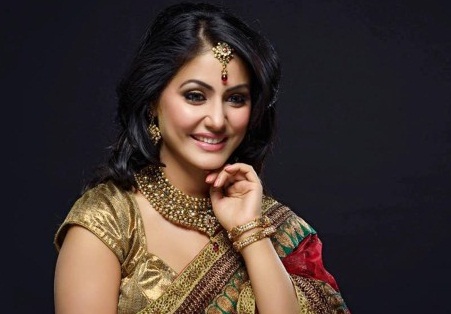 The net worth of Hina Khan is not known.

The major source of income for Hina Khan remains to be the small screen shows that she works in. As per the information, she is one of the highest paid actresses in small screen TV industry.

The real name of this amazing actress is Hina Khan

Hina is known to have a short height as she is 5 feet and 4 inches tall. In addition to this, she weighs about 56 Kgs.

Hina is presently unmarried but she had been in a relationship with Rocky Jaiswal.

Hina was born in Srinagar in Jammu and Kashmir and she later moved to Delhi to complete her education. After completing her schooling, she wanted to be an air hostess and she applied for admission in a course to become an Air hostess. However, she suffered from Malaria during the same time and at that point of time, she got an offer to work in TV shows. It is also known that she completed her Master’s in Business Administration from CCA School of management in Gurgaon and she also has a younger brother whose name is Aamir Khan. Hina had also been in controversy when Karan left the show, ‘Yeh Rishta Kya Kehlata Hai’. It was reported that Karan left the show because of the differences with Hina. As per the reports, she had been in a relationship with Rocky Jaiswal. Rocky is also known by the name of Jayant Jaiswal and he works as a Supervising Producer. As per a rough estimate, Hina earns about Rs 1 Lakh for every single episode she works in. In one of the interview, she stated that she is really brand conscious and she loves to wear clothes from Neeta Lulla.

Hina started her career in 2009 with the show called Yeh Rishta Kya Kehlata Hai and she worked in the show till 2016. In 2009, she also worked in a show called Perfect Bride. In 2010, Hina worked in Sapna Babul Ka…Bidaai. She also appeared in cooking shows like Chef Pankaj ka Zayka and MasterChef – Kitchen Ke Superstars. In 2013, she participated in Nach Baliye season 6 and in 2016, she also made a guest appearance in Bigg Boss season 10. In 2017, she made another such guest appearance in Waaris and she also participated in Fear Factor: Khatron Ke Khiladi. As per the records, in 2013 and in 2014, Hina was given the 50th rank in the list of Sexiest Asian Women. The list was published by Easter Eye. She had also been honored by Dada Saheb Phalke Award and she was given the award under the category of Best Actress.

The details about Hina’s cars and properties are not listed.