Drashti Dhami is a well-known name in the Indian television industry. She is an actress, dancer and model and worked in a lot of Indian serials as well as reality shows. She gained a lot of popularity after working in a serial called Geet – Hui Sabse Parayi in 2010. 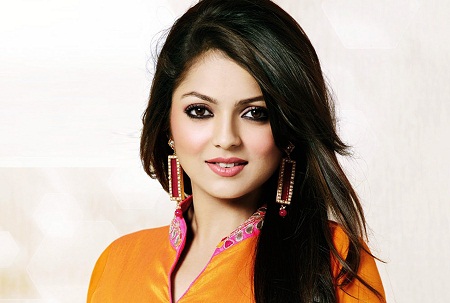 The net worth of Drashti Dhami is $1 Million.

The major source of income for Drashti Dhami is acting and she charges INR 1 Lakh (Estimated) per episode. She works in a lot of serials and reality shows.

Real Name: Drashti Dhami is the real name of this beautiful actress

Drashti Dhami stands at 5 feet and 5 inches and weighs 52Kgs.

Drashti Dhami is married to Neeraj Khemka, an NRI Businessman.

Talking about the personal background of Drashti, she was born and brought up in Mumbai, Maharashtra. She completed her schooling from Mary Immaculate Girls High School in Mumbai and her graduation in Sociology from Mithibai College. She belongs to a conventional Gujrati Family and it was very difficult for her to convince her father to get into this trade as he is very strict. It was after one of her cousin’s convinced her dad who then gave his consent. Since then her family has been really supportive and is one of the reasons behind her success. Drashti is very close to her mother who is a homemaker.

Her brother, Jaisheel Dhami, is an IT engineer and is married to Suhasi Garodia Dhami who is also an actress. Drashti got married to Neeraj Khemka who is an NRI Businessman. She shares a close bond with her family as well as her in-laws who too are very supportive of her profession. Before entering this profession, she was a Dance Instructor.

She started her career in modeling in TV and print ads and then debuted in this industry by appearing in Music Videos. Her commercial ads were for the brands like Lion Honey, Colgate opposite Saif Ali Khan, VIP Bags, Amul, few endorsements for jewelry brands etc.Her first show on TV was in the daily soap Dill Mill Gayye on Star One Channel, where she played Dr. Muskaan Chadda. This was in year 2007. Later in 2010, she played the lead role in another daily soap Geet – Huyi Sabse Parayi as Geet. She gained a lot of popularity from her daily soap on Colors named Madhubala – Ek Ishq Ek Junoon. She then went on to win a reality TV Dance show named Jhalak Dikhhla Jaa 6. She has made several such appearances on reality TV and also on various other daily soaps like Sajan Re Jhoot Mat Bolo, Saath Nibhana Sathiya etc. She has received immense appreciation for her work and has impressed the audience to a greater extent. She even got an opportunity to work in Singham Returns but she denied working in it. She has surely won a lot of hearts with her beauty and hard work and the audience is expecting to see her soon in some more exciting roles.

The details about Drashti’s cars and properties is not listed.