Do you think the desert is a lifeless wasteland which cannot support any life? If yes, you are wrong, the desert is a habitat for some animals and they are quite diverse and rich with animals. According to the facts, there is no finer example for the richness of evolution than a desert habitat. Many of the animals found in deserts have either adapted to the environment or have evolved to survive the harsh climatic conditions.

Mammals, insects, birds, reptiles and many other species of animals are found in the desert. Some of the animals that survive in the desert environment have developed some physical adaptation like slat glands that enable secretion of salts without losing water, some animals lack sweat glands and allows concentration of urine, apart from these few of the species have unique physical adaptation like avoiding fat storage throughout the body and concentrating fat storage in humps/tails. Studies on desert animals have indicated that desert animals found in different parts of the world differ from each other.

Now let’s look into some of the most common animals found in the desert.

Not many people would list the ostrich as a desert animal. But, in fact, Ostriches are desert animals and is one of the fastest animals in the Sahara desert. This animal is almost 7-8ft tall and is a flightless bird with long neck and small head. It has a large and flat beak and their eyes have long eyelashes. This animal consumes anything because they get the water required for survival from their food.An Ostrich has very long legs that enable them to run up to 40 miles an hour and they are as fast as a gazelle. They are able to travel long ways and have very sharp eyesight that can spot movement across a vast distance which helps them avoid predators.

A Roadrunner is also known as the Ground-cuckoo and is found in deserts. This bird has a 23-inch long body with long legs and tail. The main diet of the Greater Roadrunner is scorpions, spiders, small insects, and small lizards. One of the most important ways to survive harsh desert environment is to retrieve water from its own feces before excretion. This bird has villi projection in its intestinal tract that absorbs water with the help of blood vessels and sends this water to the main bloodstream. Apart from this ability, they also find water by hunting preys that provide water through blood and tissue even after consumption.

The Addax Antelope is one of the most magnificent desert animals. This animal survival has been threatened due to illegal hunting and global warming. It is very sad that it is estimated by the WWF that only total of less 500 of these animals is left in the world. This animal is mainly found in semi-arid desert regions and survives eating their staple food Addax. These animals also feed on grasses, bushes, and numerous types of leafs and survive on water from this food. Antelopes are known to live in herds with a single herd containing 20-25 animals and live up to 19 years.

A Brewer’s sparrow is one of the well-known species of desert animal known to survive the harsh desert environment with very less water consumption. They are known as the “bird without any field mark” and known to rely on sagebrush as breeding habitat. This bird sips water through the bills from leafs, blood or tissue of prey. The desert bird has a unique technique that produces “metabolic water” as by-products of some processes. The Brewer’s Sparrow feeds on seeds that have less water content but, would have good carbohydrate concentration. This carbohydrate is broken apart to carbon, hydrogen, and oxygen by the internal body system and then latter two elements are broken from carbon and reunited to produce water.

The Bighorn sheep is well-known for its thick and pointed horns. This species of sheep is entirely different from normal sheep’s. The Bighorn sheep is extremely durable and roam around the desert in herds. A herd might have up to 100 sheep. This species is very tough and attacks if frightened. They can run fast and hit you with their forehead and horns that can cause fatal injuries. They mainly roam around and feed on grasses, plants, and sedges.

It is hard to imagine a list of desert animals without rattlesnakes and sidewinders. Sidewinders are also known as horned vipers and are enlisted as endangered species. The rattlesnake on the other hand, is well-known for producing rattling sound with their tails. Rattlesnakes and Sidewinders feed on small lizards, small animals, and insects. The sidewinders have a unique sideways body movement that enables them to traverse the sand quickly and more effectively. Both these species of the viper is known to survive the harsh desert environment.

The coyotes remind us a lot of a family dog, but these species is wild animals and well-known for its extensive adaptive skills. This animal can adapt to any environment, they can virtually survive snow-covered landscape and very warm deserts. A coyote has the ability to track down rodents, scorpions, birds, and some reptiles. These desert animals do not grow more than 50 pounds and have an average lifespan of 13 years. One of the most notable ability of this wild animal is that it can manage to survive and makes themselves at home even at isolated wilderness and densely populated human grounds. 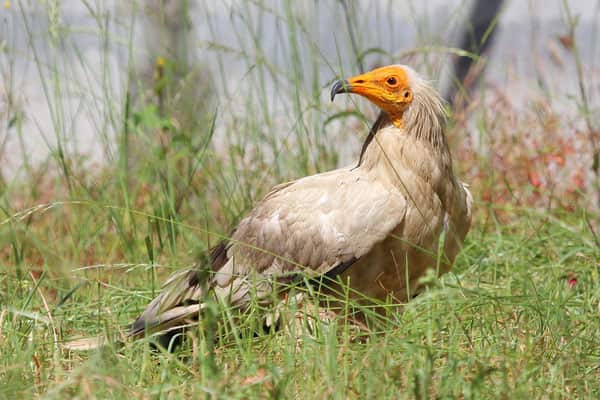 The Egyptian Vulture is known for its unique combination of beak and feather colour. This species of vulture can grow up to 85cm and have a wingspan of 1.7m. It mainly feeds on carcasses of dead animals and also hunts small mammals. The Egyptian Vulture can travel around 70 km in search of food and they are also referred to as pharaoh’s Chicken.

The Dromedary is known as the Arabian camel and has a hump on its back. The humps functions as a storehouse of fats.  The hump on their back enables them to survive without water or food for a week. The Dromedary is known to have strong limbs, leathery pads on chest and knees, and also have extremely padded feet. This species of desert animal can grow up to 7 feet and weight up to 1600 pounds. They mainly feed on grass, wheat, oats, and dates.

This article gives you a slight idea of the animals found in the desert. There are many levels of studies taking place based on the survival abilities of both animals and plants with such limited natural resources and high temperature. Few of the animals on this list are enlisted as endangered species due to global warming and illegal hunting. Let’s hope our future generation would be able to see these desert animals alive.