Indian subcontinent is a perfect abode to a variety of flora and fauna. The beautiful forests and the amazing expanses of India is a home to a number of dangerous and Venomous snakes. More than 300 species of venomous and innocuous snakes, have made their habitat in the thickest of forest, rain forest water bodies and mangrove kind of vegetation. More than 50 out of these 300 are highly poisonous including the “Big Four Snakes”. Most snakebite deaths are caused by these species in India.

The deadliest snakebites are usually dry and make the prey immobile. It is also very important to know that the strength, quantity of each snakebite, the protein composition in the venom and the type of venom is reliant on a mixture of influencers such as the snake species, its age and temperament and how much time ago the venom was used by the snake either in defense or hunting.

The Big four of the snake family are Indian Krait, King Cobra, Pit Viper and Spectacled Cobra. And due to India’s diverse biosphere these creatures find a perfect home. 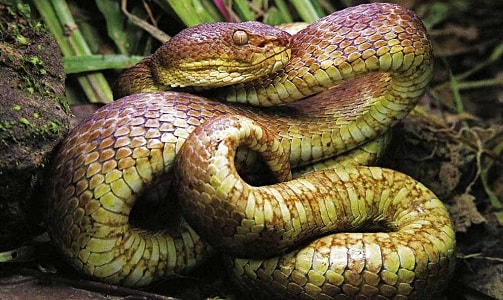 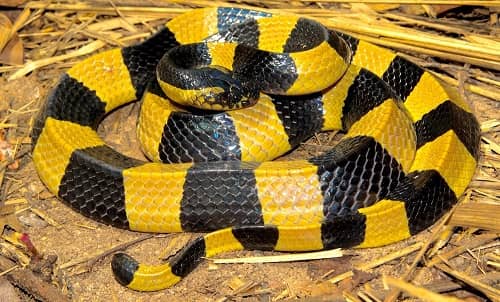 One of the largest species kraits snake found in India’s diverse biosphere is the Banded Krait. It can be easily recognized by its distinctive cross bands in black-yellowish color. Among the other species of Krait, this Banded Sea Krait is highly poisonous snake in world and in India. It feeds on coral reefs of India and is mostly found underwater. At times it is even confused with the eels. Its tail is often misunderstood as its head by the prey which this snake uses as an advantage. It is pretty slim but highly venomous. Another distinctive feature of this snake is that though it spends most of its time underwater, it would regularly come on to the land to drink fresh water. 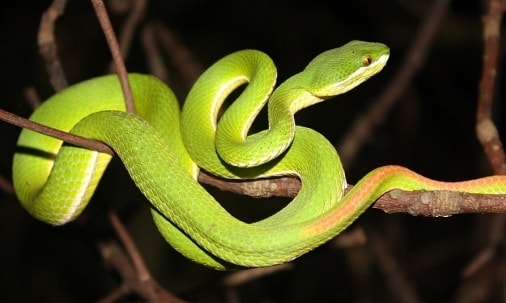 At number 8, Bamboo Pit Viper which is also known as Indian green pit viper is a beautiful snake found in bamboo jungles mostly near watercourses. Mostly these kind of vegetation is present in mountainous range of west side Ghats in south India. These snakes not only make their habitat in forest but also in open grasslands and urban areas. These snakes are usually found inhabiting trees, are nocturnal and very audacious. These are frequently hunted for their beautifully-hued skin. A distinctive feature of this species is the folded fangs which is why the snake won’t bite itself. Generally people observed swelling and an acute pain after the bites from these snakes. 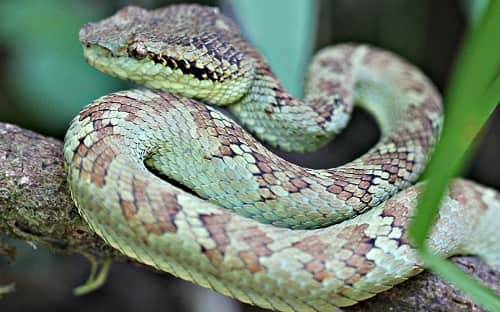 Malabar Pit Viper species is prevalent to southwestern part of India on the Malabar Coast and the forests of Western Ghats and West Coast. It is ranked at 7 of the 10 most deadly snake species in India. They can perfectly conceal themselves with camouflaging with the contiguous area. Mostly found in the rain forests and monsoon season, these snakes have a characteristic prehensile tail which can clasp or clench its prey. These are also nocturnal in nature and are known for their agile strikes. 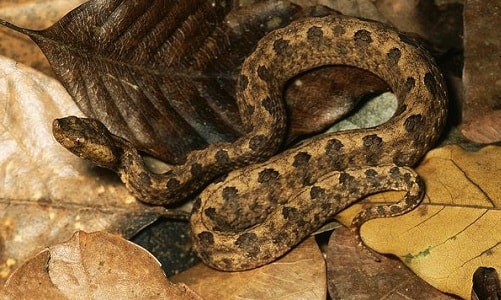 Hump-nosed pit viper is one of the common species in India. This snake is highly active in early dawn and night. Majorly found in the parts of south India where there are thick forests, coffee plantations and hilly regions of South India. This snake is also nocturnal and is known for its broad triangular head which is even wider than its neck. It is called Hump Nosed because of nose which is somewhat inverted and broad. It has been a reason of a number of fatal deaths in South India. 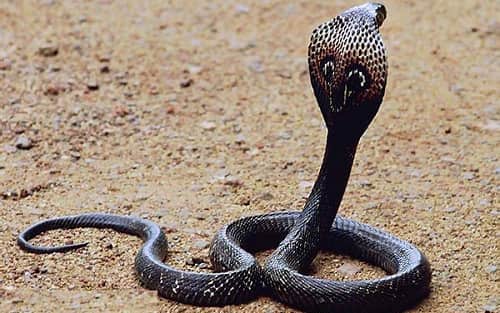 Also recognized as Indian cobra. Highly revered by Hindus as Lord Shiva coiled Indian Cobra round his neck. It has also caused a number of snakebite deaths in India. It is also known as Naja Naja and generally people misunderstand it as King cobra. It is very beautiful and can be easily recognized with its heavy body and a substantial mark on the upper side of its hood. It also comes under the Wildlife Protection Act of India. The venomous snake delivers such a poisonous bite that it can lead to cardiac failure immediately. 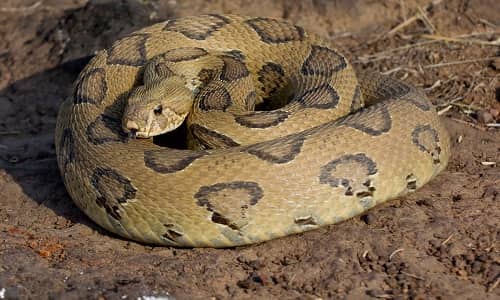 Also known as Daboia is one of the most dangerous snakes found in Indian subcontinent. Indian Russell’s viper is one of the “big four snakes” and is accountable for maximum snakebite incidents caused in India. It is named after Patrick Russell, who was a Scottish herpetologist who most likely labelled and distinguished Indian snakes for the first time. Mostly found in the areas of Bengal and Punjab, these snakes have earned a reputation of being very aggressive and one of the highly poisonous snake found in India. A distinctive feature of Russell’s viper is that it always bites to deliver a huge amount of poison dose to its prey whereas generally the venomous snakes deliver dry stings. 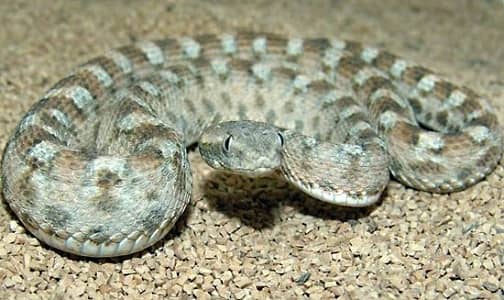 At number 3 we have, one of the India’s smallest yet the most venomous viper species found in dry and arid parts of India such as Uttar Pradesh, Punjab, Rajasthan and Maharashtra. Member of the big four family and nocturnal by nature, this snake can get highly aggressive if provoked. The scales look rather rough and have light color round patches on its hood. 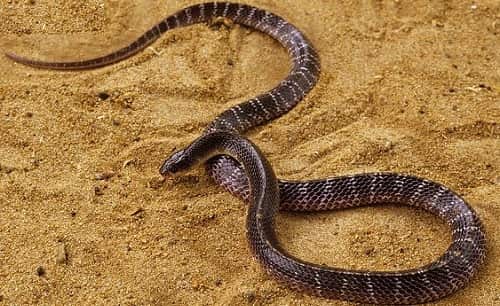 The Indian Krait is also recognized as Common krait. It is one of the commonly recognized species of poisonous snake found in the forest and rural areas of India. This snake is the top most member of the big fours of India. It is nocturnal and feeds on other snakes like kraits and also blind worms. The Indian or also the “blue krait” is often found in and near the water sources, and delivers a gruesome bite that can’t be misunderstood for something lesser than a fatality. 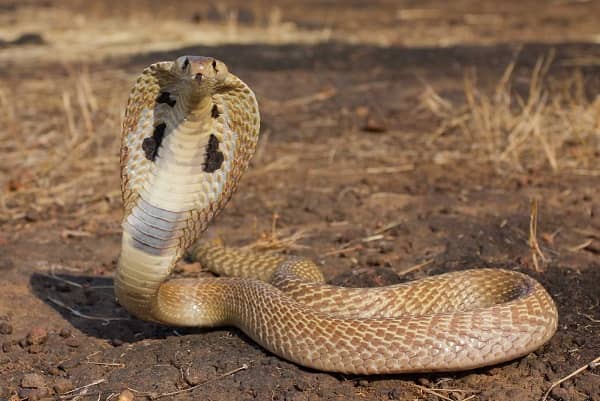 King Cobra is the longest and the venomous snake on the planet earth. It is the only snake species in the world that makes a nest for its younger ones. This snakes feeds on snakes such as cobras, krait, and rat snakes and small pythons. King cobra is of a calm nature but when provoked, this snake can raise one-third part of its body. Its features include narrower head and distinctive markings on the hood.

Though mostly feared, snakes are an important part of our nation’s biodiversity and mostly inhabit the areas like forests and jungles. Most of the snake species are non-poisonous but still they are considered dangerous which is alright since people are not so much aware about these things. Besides any animal will get aggressive when aggravated so this is a defense mechanism used by all the inhabitants of the planet. Mostly snakes will only attack once they feel threatened otherwise these reptiles generally prefer to stay away from human touch. 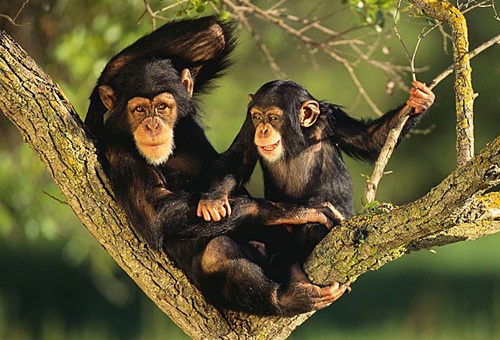