You would have certainly tried beer for at least once in your life but have you ever tried Fruit Beer? Do not be surprised as we are not talking about any non-alcoholic beverage. Yes, Fruit Beer is a thing and it is basically a beer which has fruits for the flavor. The alcoholic version of the fruit beer is not very popular in India but it is gaining popularity with time. In addition to this, the beer has a very exotic flavor and it is available in many different flavors.

If you have never tried fruit beer yet then this article is for you as we have listed the top 10 fruit beer brands in India. You can certainly try one of these and you will fall in love with the fruit beer as well. So here is the list.

First on our list is Lindemans Pecheresse Peach Beer and this is certainly an exotic beer. The brewery uses a decades-old formula to brew this beer and the base ingredients remain to be wheat and barley malts along with the hop. The peach juice is added to the beer in the later stages which gives a fruity flavor to the beer and the beer serves as a perfect partner with a dessert. If you are a fan of peach flavor then you must try this beer soon.

Does a Banana Bread Beer sound weird to you? Well, it is actually not as this beer has gained a lot of popularity in Indian market because of the fine blend of spices, malt, and banana flavor. The beer serves as an exhilarating experience for the people who love flavors and the first sip of the beer will send your senses in the mode of trance. The beer has 5.2% of alcohol content and the beer is carefully brewed with bananas and a variety of spices which gives the flavor to the beer.

On number 8, we have a strawberry beer and the most attractive part about this beer is the bottle. As soon as you unscrew the bottle, your senses will be enchanted with a luxurious and exotic aroma of strawberries. The beer has a perfect mix of strawberry juices and exotic spices which gives a rich berrylicious flavor to this beer. If we talk about any strawberry flavor beer then this is one of the highest selling beer in Indian markets and it is certainly worth a try.

If you would like to taste the traditional fruit beer then you must give a try to Kasteel rouge cherry beer as this beer is made traditionally with the goodness of cherries. The drink serves as a perfect accompaniment on the sunny days as the aroma of the fruit adds on to the flavor of the beer. The brewer also adds the flavors of chocolates and pepper in the beer and you will be able to feel in all in every drink of this beer. In addition to this, Kasteel Rouge is quite a strong beer so if you like having a strong beer then you must try this one as well.

Are you a fan of citrus flavor? If yes then this beer is made for you as the beer has a very richly infused grapefruit flavor in it. Each and every sip of the beer would send a shock to your senses as the malt of this grapefruit feel beer is full of flavors. The beer is owned by magic hat brewing company and the company has a great reputation when it comes to the fruit beer and other such beverages. The packing of this beer is also very attractive which adds on to the fun of drinking this fruit beer.

Next on our list is Kirsch Gose and this is also a cherry beer in our list. The beer has a strong flavor of cherries and the beer also has a pink color with a white rim foam. The beer has slightly sour flavor and it feels a little salty to drink but this is what this beer is all about. The fizz of the beer is certainly an add-on to this drink.

Samuel Smith is more of a craft beer and it has a flavor of peach. The recipe of the beer uses barleys and wheat malt which is fermented and flavored with help of hop and peach. Their beer goes through multiple fermentation processes and the beer is also matured for a long-lasting flavor in the drink. It is a totally organic beer and the taste of the beer is slightly sweet. 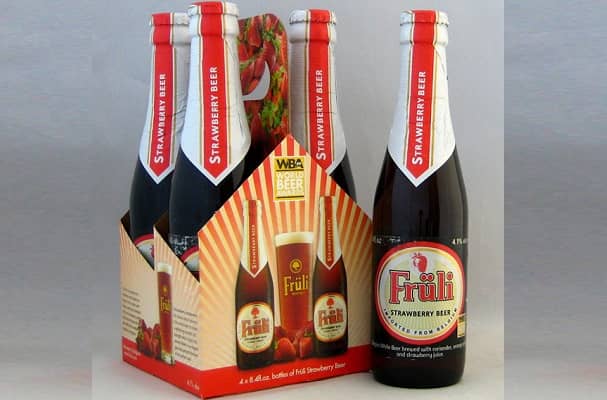 On number 1, we have a strawberry beer and the specialty of this beer lies in the fact that the beer manufacturer uses fresh strawberries to give flavor to this beer. The beer has a slightly sweet taste and it is certainly a refreshing drink. If you are heading towards beach then you need to take a dozen of these bottles with you and you will certainly enjoy that every evening of your life.

These are the top 10 fruit beer brands in India and they are easily available at premium wine shops across the country. You can try one of these and gain acquaintance of the flavor of the fruit beer.