GAGAN refers to GPS Aided Geo Augmented Navigation System is a satellite based navigation system developed by Indian Space Research Organization (ISRO), in collaboration with Airports Authority of India. The system provides precise and accurate information related to the geo spatial location of the aircrafts in terms of latitude, longitude and height, along with the parameters like time and velocity. The aim of GAGAN System is to provide excellent navigation facilities for the aviation industry in the country. The coverage area of the services includes the whole of India and extends over Bay of Bengal, South East Asia, Middle East and reached up to Africa. GAGAN was launched on Monday, 13th July, 2015, by Ashok Gajapathi Raju, the Civil Aviation Minister, with the purpose of enhancing the efficiency of the airline operations in India and also bringing down the costs.

Here is a list of the 10 major aspects of GAGAN Satellite Navigation System: 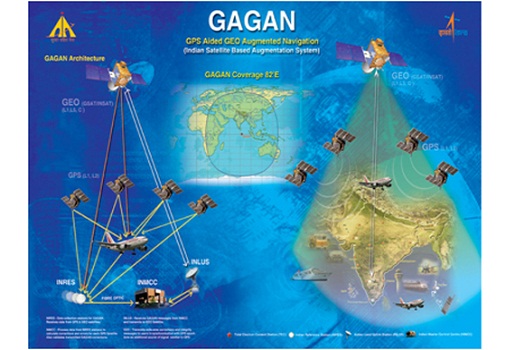 #1. GAGAN provides extremely accurate information in relation to the location of an aircraft, covering parameters such as latitude, longitude and height and also includes other important points such as time and velocity. For this purpose, it makes correction in distortion of GPS signals.

#2. In the present scenario, a margin of error of nearly 50 m is left by the Air Traffic Controllers when they read the movement of the aircrafts. On the other hand, this margin of error is reduced to 3.5 m only.

#3. As stated by V Somasundaram, the head of Navigational System Wing of Airport Authority of India, “GAGAN will help in packing a larger number of aircrafts in the same limited air space, in addition to making accurate predictions related to ground obstacles. In this ways, it can suggest shorter routes for air travel.”

#4. Since the aircrafts will now travel on shorter routes, they will be able to save on fuel expenses to a large extent.

#5. Before being developed in India, only USA, Europe and Japan were the countries with such an advanced navigational system.

#6. Every single movement of the aircraft will be measured by three satellites under this system, and these movements will be navigated not only above the airspace of India but also all around the SAARC nations. The areas covered by GAGAN include the airspace above Bay of Bengal, South East Asia, the Middle East and also reaching up to Africa.

#7. GAGAN System has already become operational in India but for making use of the system, special receivers have to be installed aboard the air craft by the airlines, so that they could be aligned with the satellites functioning under GAGAN.

#8. In addition to increasing the fuel efficiency of airlines, GAGAN would also be used for runways guidance, which can also lower the costs of airlines as they would be less dependent on ground aids. Also, the burden on flight crews would be reduced with the help of the system.

#9. GAGAN is a joint venture of ISRO and AAI, and has an estimated investment of a whopping Rs 774 crore, which is a small price for the wide array of benefits it has.

#10. A meeting has been called by the government in the month of September for discussing the details of the project.

GAGAN System is all set to revolutionize the aviation industry in the country.