Udhagamandalam,  in other words is Udhagai or Ooty, is a town as well as municipality in the state of Tamil Nadu, India. The location is 80 km north of Coimbatore and also the capital of the Nilgiris district. The hill station is very beauitful.

It was occupied by the Toda; tourism, agriculture, manufacture of medicines and photographic film are the main ways of living in Ooty. The beauty of the place attracts the visitors and different popular destination nearby the place also binds the tourists.

Listed below are the ten interesting Facts about Ooty: 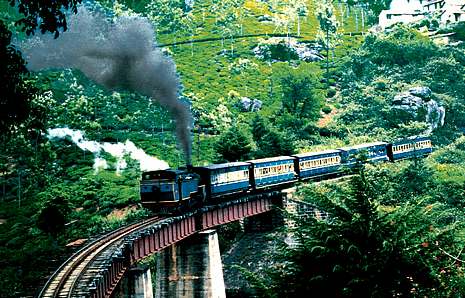 It is one of the best places for shooting in India. The photographers always want to go there for the pictorial beauty of the place. Every photographer’ want to grab the serene and calmness in the photographic camera. Shahrukh Khan’s Chaiyya Chaiyya in 1984 song is famous for its tempting locations and it is not easy to forget the dance on the train which was full of eye- catching background. The block buster movie of Sharukh Khan, Amitabh Bachchan and Aishwarya rai “Mohabbatein” had also shooted there.

9. Ooty is a Home to a UNESCO World Heritage site

Nilgiri Railway was declared in July 2005 as an extension of the Darjeeling Himalayan Railway. The Nilgiri Railways is also known for UNESCO World Heritage Site. The distance covered by this railway system is of 45 Kilometres. The heritage was preserved by issuing Edmondson style manual tickets for the Ooty-Mettupalayam journey.

Doda Betta Peak is located on the Ooty- Kotagiri Road, 9km away from Ooty. It is the fourth highest peak in South India region at a height of 2,637 metres. The Anamudi peak in Kerala is the highest with 2, 695 metres. So it is best to visit and enjoy the beauty.

The famous game as well as sophistication symbol snooker has started from the Ootacamund Club. There is a story behind the name snooker. It is said, that during British period Colonel Sir Neville Francis Fitzgerland of Chamberlain shouted snooker (a word for a junior cadet at the Officers Academy at Wool wich), when playing with their opposite team , failed to pot a ball. The official acceptance and implementation of rule was taken in the year of 1882.

During the period of 1823 and 1825, the Collector of Coimbatore Mr John Sullivan had created the Ooty Lake for making it a source of irrigation and fishing. The area covers 65 acres that are the basic facility for the tourists from The Tamil Nadu Tourism Development Corporation in the year 1973, but in today’s scenario, it is the dirtiest water. The tourists are getting the idea that the lake has beauty but now its dirtiness is more famous then the place beauty.

5. The Slowest Train in India:

The Nilgiri Mountain Railways has recorded its name as the “Slowest train in India”. The train speed runs at a speed of averaging 10 kmph.  One can walk along with the train side by side and also race with the train to win.

4. The Steepest Railways in Asia

Between Conoor and Mettupalayam, there is a Niligiri Mountain Railway, which is known for the steepest railway system in Asia and it was opened officially opened on 11 August 1898. This fabulous work was done by Governor of Madras, Sir Arthur Elibank Havelock. Swiss Railway has a very deep relation with this railway system because it was conceptualized by the Swiss Engineer, Mr Niklaus Riggenback. The same engineer had also used his brains in Riggi Mountain Railways in Lucerne, Switzerland.

The cool climate is making this place as an educational hub. There are elite institutions and more than 60 boarding schools are here in Ooty. Hebrew is one of the best international Schools, which is famous for its educational system. The rising tourism is decreasing the beauty of the place by increasing pollution which is depleting the cleanliness of the heaven on earth.

2. Madras Presidency has made Summer Capital

Historical Resources revealed that Ooty was the summer capital of Madras Presidency of the East India Company of the British. Tamil Nadu, Northern Kerala, parts of Andhra Pradesh and Karnataka comes under the Madras Presidency. At that time Srilanka, known by island of Ceylon was also in the presidency. English people want to enjoy British like environment in Ooty.

1. It is the home of Oldest Military Institution

In the year of 1905, The Defence Service Staff College, Wellington has founded one of the oldest military institutions in India. It was shifted to Pakistan due to partition. At that time they were offering to three services which include paramilitary forces as well as Civil Services.