One of the shakti peethas in India, Kamakhya Temple perched at the peak of the Nilachal Hill in Assam has many interesting facts. Unlike other temples in the country, the Kamakhya Temple doesn’t have any idol of Goddess Kamakhya, and the complex has temples often Mahavidyas. Like this, a few of the facts about the temple listed here will truly amaze you.

Kamakhya Temple, representing Shakti or the feminine power, is one the 51 peethas in India. Dedicated to Goddess Kamakhya, the temple is one among the many pilgrimages in the country. It stands apart from other peethas as there is no sculpture or idol of the Goddess in the temple, but only Yoni or vagina of the Goddess that is worshiped here. 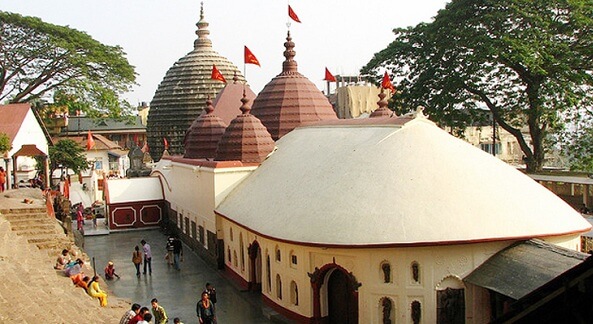 The temple is located at the peak of the Nilachal Parbat in the West of Guwahati in Assam. It is about 8 km west of Guwahati and near the banks of the Brahmaputra river. One can walk down by starting at the Nilachal Parbat base at the Kamakhya Gate on AT Road. Kamakhya temple is nearly 2 km away from the gate. However, an easier way is to board a bus or hire a shared taxi to reach the temple. On the return journey, one can visit other temples on Nilachal hill and also enjoy the beauty of green hills enveloping the city.

The sculptured figure of the yoni (vagina) of the Goddess is worshipped in Kamakhya temple. It is placed in a corner of the cave. Other than this, there is no idol or sculpture of the Goddess in the temple. In a surprise of all the devotees, a natural spring keeps the stone moist. However, women when menstruating are not allowed inside the temple.

The story goes that Goddess Sati or Shakti married Lord Shiva against the wishes of her father, King Daksha. When Daksha organized a Yagna, he doesn’t invite his daughter or Lord Shiva. In spite of no invitation, Sati decides to attend the yagna. However, when she reaches her father’s palace, he insults her and her husband. Unable to bear the insult, Sati kills herself by jumping into a fire. When Lord Shiva comes to know about this, the furious husband starts tandava, the dance of destruction, holding the corpse of Goddess Sati in his arms. To save the universe, Lord Vishnu cuts the dead body of Goddess Sati into pieces with his Sudarshan chakra. The 108 places where the parts of the Goddess fell are worshipped as Shakti peethas today. Sati’s womb is believed to have fallen at the place where Kamakhya temple is located.

6. Kalika Purana: One of 4 primary peethas

According to the Kalika Purana, Kamakhya Temple is one of the four primary shakti peethas. The Vimala Temple in Jagannath Temple, Puri, Odisha; Tara Tarini near Brahmapur, Odisha; and Dakhina Kalika in Kolkata, West Bengal are the other three. However, Devi Bhagavata, which has a list of 108 places where parts of Goddess Sati’s body fell, does not confirm this. Although, Kamakhya Temple is listed in a supplementary list.

The Kamakhya Temple complex comprises the temples often Mahavidyas. While Tripurasundari, Matangi and Kamala are stationed in the main temple premises, Tara, Bhairavi, Baglamukhi, Sodashi, Chinnamasta, Kali and Dhumavati have separate temples dedicated to each outside the main temple.

The present structure of the temple underwent many changes between 8th century and 17th century. It was rebuilt by the 17th century King Nara Narayana. The Kamakhya temple comprises of three chambers. A small idol of the Goddess was later included in the square-shaped central chamber. The walls of this chamber have images of King Nara Narayana inscribed on them. The middle chamber leads to Garbhagriha which is in form of a cave. In a corner of the cave is a vagina-shaped opening in the bedrock. The third chamber is large and rectangular-shaped.

The Kamakhya Temple organises an annual fertility festival known as Ambubasi Puja. It is believed that the Goddess has her menstrual cycle during this time. After remaining closed for three days, the temple reopens with celebrations on the fourth day. During this festival, it is said that the Brahmaputra river also becomes red.

2. Navratri and other celebrations

Navratri or Durga Puja is celebrated at the temple in September and October. Thousands of devotees visit the temple to offer prayers during this time. Vasanti puja during March and April, and Manasha Puja are other annual celebrations at the temple, besides the annual fertility festival. Pohan Biya marking the symbolic marriage of Lord Kamesvara with Goddess Kamesvari is celebrated during December and January.

The Kamakhya Temple is the centre for Tantric worshippers. The annual Ambubasi festival attracts lots of devotees for tantric worship.

The temple with these unique features stands out for respecting femininity.