Do you even know where Bhutan is?

Bhutan is a landlocked kingdom that is located in a part of South Asia that has been dubbed as “the roof of the world.”Together with its neighbor Nepal, Bhutan lies in a place that is way above sea level – near the world’s tallest mountain peaks.

This reality has enabled the Bhutanese people to have a unique culture, a one-of-a-kind society, and a people well attuned to mountain climate. 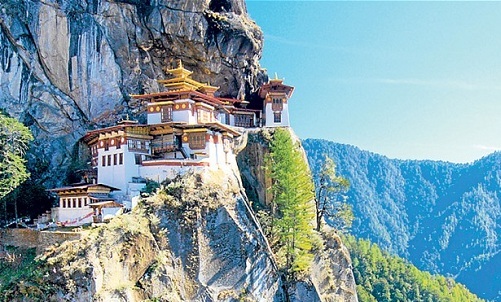 Today, you will find out 10 interesting facts about this small kingdom-nation.

10. The exact meaning and origin of the country’s name remains unknown

Historians and linguists still cannot agree as to the origin of the country’s name. Some say that the closest translation would be the Sanskrit word Bhota Anta which means end of Tibet. This corresponds rather well to the country’s geographical location – being in the southern slopes of the Tibetan mountains.

9. The people of Bhutan only got to experience television and the Internet in 1999

The government of Bhutan only lifted its ban on television towards the end of 1998 and allowed its people to use the Internet in 1999. This makes Bhutan the last country in Asia, and one of the very last countries in the world, to experience the technologies of the boob tube and the world wide web.

8. Bhutan’s “best friend” and closest ally is its neighbour India

India remains to be Bhutan’s closest trading partner. Most of Bhutan’s exports go to India and the Bhutanese people may work in India without any working permit. Indians and Bhutanese people may also visit each other’s countries without the need to secure any tourist visa. Bhutan’s local currency is also pegged to the Indian Rupee.

7. Bhutan has one of the smallest standing armed forces in the world

Bhutan’s armed forces amounts to only 16,000 soldiers in total, and all are trained in terrestrial armed conflict only. In addition to this, Bhutan, being a landlocked country, has no standing navy and no standing air force. It heavily relies on India for the protection of its aerospace sovereignty and territory.

6. Bhutan is one of the countries that still has a high forest cover

Bhutan’s mountain slopes and tiny river valleys are criss-crossed by forest. In fact, Bhutan ranks in the world’s top 10 when it comes to the ratio of a nation’s forest cover and its total land area. As of 2006, 64% of Bhutan’s land area is still covered with forest.

Bhutan, being a very small country, actually experiences 5 distinct seasons in one year – spring, summer, autumn, winter, and monsoon. This nation experiences torrential monsoon rains between winter and the onset of spring, with its western portion experiencing more rain that the rest of the country.

4. Bhutan’s fauna is one of a kind

The nation’s animal life is both unique and astounding. In fact, Bhutan is home to the world’s rarest animals – such as the golden langur – a kind of old world monkey. Bhutan is also home to the hispid hare, the red panda, marmot, blue sheep and the takin – Bhutan;s national animal which is a cross between a sheep and cattle.

3. Bhutan is currently one of the world’s fastest growing economies

Starting in 2005, Bhutan’s economy has been growing at a very fast pace -at double digits, actually! This was largely due to investments in the country’s rich hydro-electric power potential and the tourism industry. More and more Bhutanese are also attending Indian universities and go back to Bhutan as professionals and skilled workers.

2. Its capital city is one of the most least populated in the world

Bhutan’s capital city – Thimpu, has a population of 65,000 as of 2013, one of the smallest populated capital cities in the world. Much of Bhutan is still very rural and agricultural.

1. Bhutan is a Buddhist nation

The Bhutanese people are one of the most ardent and traditional Buddhists on the world. They follow Tibetan Buddhism and regard Mt.Meru as a very sacred mountain.