The wonders of the world’s oceans are just absolutely fantastic and totally limitless. Truly, the depths of the sea reveal marine and aquatic flora and fauna that is absolutely majestic. Underwater places like the Great Barrier Reef in Australia, as well as the Coral Triangle that is being shared by Indonesia, Malaysia, and the Philippines are paradise to all kinds of marine life. One really has to dive deep to see how beautiful these sea creatures really are.

However, not everything that is underneath is innocent and fun. Indeed, the waters are also home to some of the world’s most poisonous and deadliest species of fish. Extreme caution should really be observed at all times.

This list dishes to you the 10 most poisonous fish in the world. Be careful when you go diving next time or you might actually regret it! 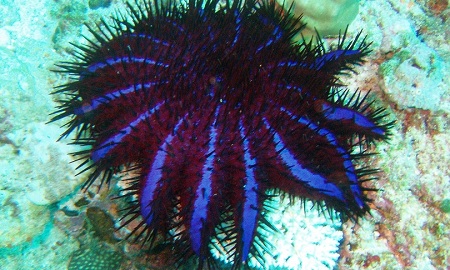 This fish is a kind of starfish that is found very deep under the sea. As a matter of fact, among the many species of starfish in the world, this is the only species that is poisonous. This kind of starfish releases a kind of venom that causes extreme pain, swelling, or even death for the careless diver or swimmer. This type of fish dwells deep into the sea and is usually gargantuan in size. While its face and body may appear to be harmless, its tail has spines that secrete poison whenever the fish feels threatened. When one comes in contact with the spines, it causes extreme pain, breathing and vision problems, and other unfortunate symptoms. The pufferfish is actually non-aggressive and will just leave you on your own. The danger lies when one accidentally steps on it or when one eats it. This type of fish has a very toxic substance called tetradoxin which is found in all its body parts except for its muscular system. Only experienced seafood chefs can cook the pufferfish to avoid accidental poisoning. This strange-looking fish is found in the warm waters of the tropics and is scattered in many bodies of water all over the world. Its poison lies on its fins and it spreads quickly to the body, thereby causing extreme pain and swelling but not to the point of actually killing the human victim. The boxfish is a lethal killing machine on its own. Looking almost like the pufferfish, the boxfish secretes poison on its immediate surroundings especially when the fish feels threatened. The poison contaminates and affects everything on its path leading to respiratory failure and blood thinning. The stingray is actually eaten in some parts of Asia as a delicious seafood delicacy. However, its poison is actually concentrated on its sharp tail which could either stab then poison an aggressor. The poison of this type of fish could prove fatal – as it is extremely potent and concentrated. Fortunately, this type of fish dwells in the deepest depths of the ocean, often away from any human intervention. The viperfish has a flashlight-like structure on its body, which it uses to attract victims – often times fish that is even bigger in size than the viperfish. This beautiful fish in reality is very quiet and almost never aggressive. Its poison is found on its dorsal spines and is extremely potent and dangerous. The poison it secretes causes respiratory and cardiac failure, not to mention extreme pain on the victim. Death is almost a certainty. This odd-looking fish is a potent factory opf poisonous venom. Thankfully, the fish is non-aggressive and just chooses to keep still most of the time. Many accidental human victims claim that poison from this fish produces excruciating pain and has claimed the lives of not a few people. The most poisonous fish in the world does not dwell in the sea. Rather, it is found in the rivers and streams of South America. This fish should be avoided at all times as its poison can even cause mood and thinking problems to its poor victims.